Chromatin impacts the readout of DNA sequence for cellular functions and for regulatory decisions during development. As biologists, we require increasing data on chromatin from smaller and smaller cell samples. Chromatin Immunoprecipitation (ChIP) has been one of the most widely used techniques in biology, but remains challenging with small samples and is fraught with signal-to-noise issues. Enzyme tethering provides an alternative to ChIP.
Steven Henikoff
Investigator, HHMI, Fred Hutchinson Cancer Research Center
Follow
Like

Very little has changed in the way ChIP is performed since it was first described more than 30 years ago. Rather, the huge successes using ChIP have come from phenomenal improvements in readout technologies, progressing from southern blotting in the 1980’s, to quantitative PCR, to microarrays, and over the past decade to high-throughput sequencing. However, ChIP is not the only method for chromatin profiling. An alternative was first introduced by Bas van Steensel almost two decades ago, in what we termed “DamID”. DamID is performed by introducing into cells a chimeric fusion between a chromatin protein of interest and Escherichia coli Dam methyltransferase (Dam), whereupon Dam methylates the adenine of adjacent GATC sites in vivo, and after extracting the DNA, methylated GATC sites are mapped using a methylation-directed restriction enzyme. Unlike ChIP, where the whole genome is first shattered, and then specific fragments are fished out by affinity purification, DamID only methylates near its binding sites. Because tethered Dam methylates targets that are insoluble when extracted for ChIP, DamID has become the method of choice for profiling target chromatin proteins associated with nuclear lamins.

The 2004 paper from Laemmli’s group that introduced ChEC also described a variation, termed “Chromatin Immunocleavage” (ChIC), which greatly enhanced its general applicability. DamID and ChEC are limited to genetically tractable model organisms because cells must be engineered to produce a fusion protein. However, ChIC avoided this by fixing cells or nuclei and then using an antibody to bind its chromatin target. Antibody binding is followed by addition of a Protein A/MNase (pA-MNase) fusion protein, where Protein A tethers MNase to the chromatin-bound antibody. Addition of calcium then activates MNase, and the cleaved DNA is extracted and cleavage sites mapped by Southern blotting. Just as we saw for ChEC-seq, when we adapted ChIC to NGS sequencing to directly map DNA cleavage sites, we rapidly generated basepair-resolution profiling in a reliable and robust protocol. We made several modifications to improve efficiency and reduce background, such as digesting on ice and preferentially recovering the small fragments with cleavages on both sides of the targeted epitope from the supernatant, a protocol that we termed “Cleavage Under Targets & Release Using Nuclease (CUT&RUN). CUT&RUN requires the pA-MNase reagent, but this is not commercially available, and so over the past two years we distributed fusion protein to ~600 laboratories.

CUT&Tag: Libraries in a day and single-cell profiling

The low backgrounds and high efficiency of CUT&RUN relative to ChIP-seq and its suitability for full automation have made it the method of choice for low cell number applications, until now. Our new CUT&Tag method (Cleavage Under Targets & Tagmentation) replaces MNase in the Protein A fusion protein with the cut-and-paste Tn5 transposase complex (pA-Tn5). This further simplifies the protocol, because DNA integration simultaneously fragments binding sites and adds sequencing adapters to those fragments, thus eliminating in vitro library preparation. CUT&Tag can be performed economically in a single day on the benchtop or in high-throughput mode on 96-well plates. Most importantly, the low backgrounds and high efficiency of CUT&Tag (even out-performing CUT&RUN) make it worth considering for all chromatin profiling applications. To enable researchers to try CUT&Tag, we have thus far distributed free aliquots of pA-Tn5 upon request to ~300 laboratories.

Quirks of the procedure lend themselves to new applications. The chromatin fragments generated by CUT&Tag remain bound by the transposase, and so fragments do not leak out of the nucleus. This enabled us to perform all the steps of a chromatin profiling experiment on a population of cells in a single tube, and then dispense single cells into a nanowell array for barcoding during PCR. The resulting data captures the chromatin profiles of single cells at unprecedented detail.

We anticipate that CUT&Tag in its bench-top, high-throughput and single-cell modes will transform chromatin profiling from an artisanal technique into a routine research and perhaps even clinical procedure. 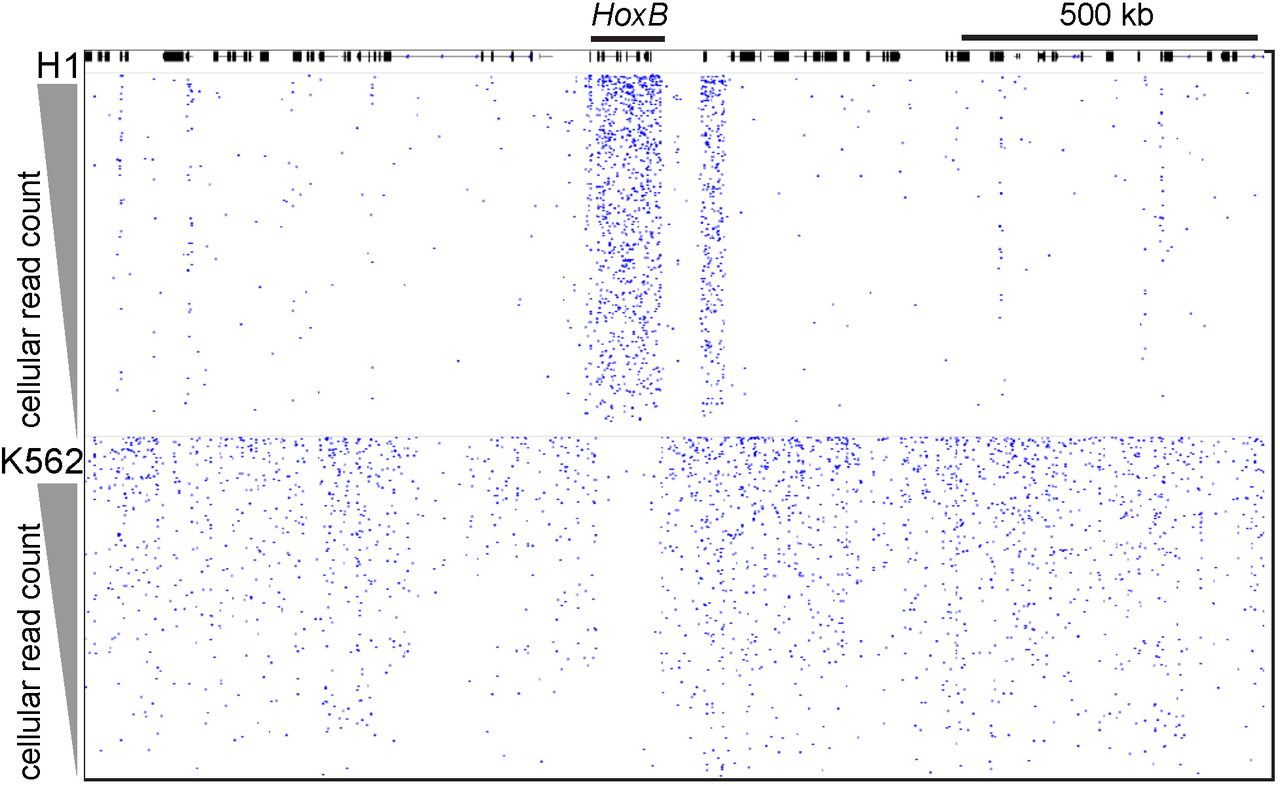 Chromatin impacts the readout of DNA sequence for cellular functions and for regulatory decisions during development. As biologists, we require increasing data on chromatin from smaller and smaller cell samples. Chromatin Immunoprecipitation (ChIP) has been one of the most widely used techniques in biology, but remains challenging with small samples and is fraught with signal-to-noise issues. Enzyme tethering provides an alternative to ChIP.