Bacterial two-component systems (TCSs) are the largest family of signal transduction pathways in biology, and a major potential source of sensors for synthetic biology. We have developed a general method for swapping TCS DNA-binding domains, which is enabling their inputs to be discovered more easily and allowing them to be repurposed for bio-sensing applications.
Jeff Tabor
Associate Professor of Bioengineering, Rice University
Follow
Like

Rewiring of bacterial two-component systems (TCSs) was achieved by DNA-binding domain swapping of the two largest response regulator families, which enables cross-species porting and provides a tool for identifying ligands for uncharacterized TCSs.

One day in late 2013, my Postdoc Sebastian Schmidl showed me that he could swap the DNA binding domain (DBD) of the well-studied bacterial response regulator (RR) OmpR with that of the related RR CcaR, such that OmpR could activate transcription from the CcaR output promoter. OmpR derives from an osmo-sensing E. coli two-component system (TCS) while CcaR comes from a cyanobacterial green-light sensor. There were several notable things about Sebastian’s result. First, the engineered TCS based on the OmpR-CcaR chimera worked better than its counterpart based on wild-type OmpR. Additionally, his first designs were functional. Both of these outcomes are quite rare in protein engineering experiments. We thought we may be onto something.

With the help of a talented undergraduate named Kat Sofjan, Sebastian built and tested a library of about 40 OmpR-CcaR chimeras, each with a different crossover point. The data looked almost exactly like we’d imagined: a bell curve where chimera performance improves the closer the crossover point is to the boundary between the N-terminal phosphoryl receiver (REC) and C-terminal DBD. This result suggested that there are many possible ways that a given REC and DBD can be combined to yield a functional RR. Indeed, Sebastian went on to rewire OmpR to several other DNA-binding domains from other family members.

Around that time, another Postdoc in the lab named Kristina Daeffler was working with TorSR, an E. coli trimethyl amine N-oxide (TMAO)-sensing TCS with an OmpR/PhoB-family RR (TorR) for a gut biosensing project. We wanted to see if TorR could be rewired the same way OmpR could. So Kristina swapped the TorR DBD with the same five Sebastian had used for OmpR, using the same crossover points. Her results mirrored Sebastian’s. This suggested we had found a general way to swap DBDs of the OmpR/PhoB RR sub-family, the largest such group. This was an exciting time for the project and for Sebastian, as he handed off the work to a new Ph.D. student named Felix Ekness and moved on to start a faculty position at Texas A&M Laredo.

Felix in the lab. He's always this happy.

Next, we wanted to replicate our results with the second largest group of RRs, the helix-turn-helix (NarL/FixJ) sub-family. However, structural work had shown extensive and variable interdomain interactions in this family, which gave us reason to doubt that DBD-swapping would work as well here. At this time, a Ph.D. student named Brian Landry was working with the E. coli nitrate-sensing TCS NarXL for gut and soil biosensing applications. Brian and his undergraduate Nikola Dyulgyarov identified the DBD from the B. subtilis RR YdfI, which is involved in antibiotic peptide sensing, as a well-characterized option to swap onto NarL. They only tested a couple of crossover points near the linker. Somewhat surprisingly, these NarL-YdfI chimeras worked on the first try. Felix went on to show that NarL could be rewired to YdfI at many different crossover points, to multiple other NarL/FixJ-family DBDs, and that these results generalized to a second TCS in the family (a glucose-6-phosphate sensor). Thus, NarL/FixJ RRs appear to be just as malleable as their OmpR/PhoB counterparts.

Why does DBD swapping work so well? Most RRs dimerize upon phosphorylation. An RR dimer has exponentially greater DNA binding affinity than the two corresponding monomers. Thus, dimerization alone can drive DNA binding, and thus transcriptional activation or repression. REC domains and DBDs have also been shown to fold and function independently. Thus, we believe that a given REC domain can activate many different DBD “cargoes” simply by dimerization. Of course, more complex interdomain interactions may occur as well, and these may help or hinder RR function. Indeed, we observe that about half of the RR chimeras we construct are non-functional. Future work, including structural studies on chimeric RRs, may allow us to improve the reliability of DBD swapping.

After establishing the technology for the two largest RR sub-families, we were eager to show its applications. First, we showed that while the unmodified E. coli nitrate sensor NarXL was non-functional in B. subtilis, rewiring to YdfI restored function in a dramatic way, leading to >1,300-fold activation! We had always suspected that gram-negative sensor kinases (SKs) may not fold or function properly in gram-positive membranes, and vice-versa. On the other hand, this experiment suggested that the porting of output promoters across long evolutionary distances might be a bigger problem. Thus, if your favorite TCS doesn’t work in your favorite heterologous host, you may try rewiring it to a related DBD and output promoter that do.

Finally, we got to the big experiment. We thought that DBD-swapping could aid in the discovery of TCS inputs. A new Ph.D. student in the lab, Kathryn Brink, wanted a good starter project that would give her experience working with TCSs, so she was up to the challenge. Under Kristina’s mentoring, Kathryn identified the TCSs of the freshwater bacterium Shewanella oneidensis as subjects. S. oneidensis famously breathes a wide range of metals in the absence of oxygen, and we suspected some of its TCSs may sense these metals. Kathryn and Kristina scanned the genome and identified eight OmpR-family TCSs that were not homologous to characterized systems. They rewired them to the PsdR DBD in E. coli and linked them to GFP expression. In addition to the electron acceptors, they then went through all the chemicals in the lab storage cabinet and identified ~100 things they thought bacteria may care about. Kathryn then screened seven of the TCSs (one couldn’t be cloned) against all of the inputs. She got a lot of preliminary hits, but devised a beautiful set of control experiments to eliminate those that acted non-specifically. She quickly realized that SO_4387/88 is a pH sensor. Serendipitously, pH was not one of our inputs, but a side effect of the NaOH we had to dissolve certain chemicals in. Interestingly, SO_4387/88 is also conserved in Y. pestis, the causative agent of bubonic plague. Many TCSs are involved in virulence, so maybe this one is too. You could imagine using commercial gene synthesis and high throughput screening to scale Kathryn’s experiment up to dozens or hundreds of systems, or performing more targeted experiments on TCSs of particular interest.

Kathryn taking a break from benchwork.

It’s the people that make research fun. This project was carried out by a wonderful team of students and postdocs who were great to work with. We think DBD-swapping is going to open up new experimental avenues in the microbiome and synthetic biology, allowing researchers unprecedented access to this large family of biological sensors. My lab is already using the method for numerous follow-up projects, which I hope to tell you about soon. 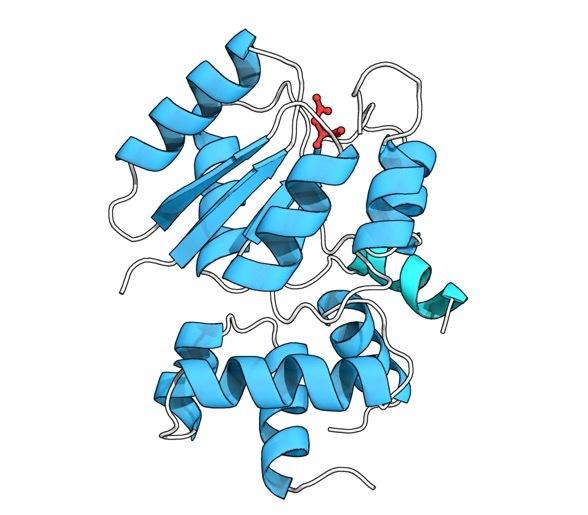 Bacterial two-component systems (TCSs) are the largest family of signal transduction pathways in biology, and a major potential source of sensors for synthetic biology. We have developed a general method for swapping TCS DNA-binding domains, which is enabling their inputs to be discovered more easily and allowing them to be repurposed for bio-sensing applications.