A scientist’s race to save her husband from a deadly superbug
Laura DeFrancesco
Senior Editor, Nature Biotechnology
Follow
Like Liked by Ruth Milne and 1 other

It only could have happened at this time.  A man desperately ill with multi-drug resistant bacteria was saved by a nearly century-old therapy that has been maligned and cast aside for decades.  What saved the day was first and foremost, the wife of the dying man, an epidemiologist, who turned to the Google and Pubmed to look for answers.  What she found was a collection of researchers from around the globe who had been toiling away with bacteriophage, each for their own reasons.  (Before antibiotics, phage were used as anti-infectives, and to this day, in regions mostly in Eastern Europe, they are still used.) Faced with the desperate situation of this couple, phage researchers from three groups toiled literally around the clock for weeks first to identify phages that would infect the offending bug---phage display remarkable host specificity--- and then prepare enough of them to beat down an infection that had gone septic.  This horrific tale of the near death and remarkable rescue by phage is recounted in great detail in “The Perfect Predator” (https://theperfectpredator.com/) by said wife, Steffanie Strathdee, whose husband, Tom Patterson, improbably survived an infection of Acinetobacter baumannii, which the World Health Organization considers the bacterial family that poses the greatest risk to human health.

Initially, it looked like a bad case of food poisoning that Patterson had contracted during a trip he and Strathdee had taken to Egypt’s Luxor Valley of the Kings in the fall of 2015. But when he wasn’t responding to therapy, doctors found that Patterson had a football sized pancreatic cyst that was harboring a multi-drug resistant bacteria. The hope was to drain the cyst and prevent the bug from getting out into the circulation—a hope that was dashed.  Days of being laid up in a hospital room turned into weeks, weeks into months, and several episodes of septic shock---which kills hundreds of thousands of people in the US each year---and multiple organ failure.

What ensued was a race against time to find phage, or in the case of Patterson’s infection, the right cocktail of phage, as A. baumannii has the nasty habit of developing resistance, which can only be beaten by hitting the bug with a diverse collection of phage.  Another somewhat providential aspect of this tale is that this bug has been in the radar of our military, since service men and women have been returning to the US with what they have started calling, Iraqibacter. That led the Navy to build a program to combat it, including phage.  This group at the US Naval Medical Research Center, turned out to be one of the three—the other two the Center for Phage Technology at Texas A &M, and Ampliphi Biosciences, a San Diego-based biotech company---that came up with the cocktail of phage that saved Patterson’s life.

The story has no shortage of heroes. A multitude of researchers and technicians, willing to scour their phage collections and when that failed, scour the local environment (read sewage) for just the right combination of phage. It was all for a good end, not only for Patterson (and Strathdee) but it is now helping to jump start the development of phage-derived antibiotics. It couldn’t come at a better time. It is predicted that by 2050, every three seconds someone will die from multi-drug resistant infection.

Already, it has been good news for a British teenager with cystic fibrosis, whose Mycobacterium abscessus infection has been stymied by phage that was provided by a basic science group at University of Pittsburgh run by Graham Hatfull. Hatfull has been studying phage for decades, and only recently had begun to think about how his work might have clinical applications.  Dipping into a collection of mycobacteriophage that he has been assembling for decades, he found three that infected this patient’s isolate.  It wasn’t exactly straight forward, as Hatfull used his armamentarium of molecular engineering technologies to expand the host range of one, knock out some genes that would have sent the phage into latency in another.  All this is documented in a paper to be published by Nature Medicine on May 8th (https://www.nature.com/articles/s41587-019-0133-z)

Beyond compassionate use treatments, which have been on the rise of late, several phage therapy companies have been spawned or revitalized in the wake of the Patterson success story.  Who they are and how they are making over this ancient therapy is detailed in a news feature in the June issue of Nature Biotechnology (available on line on May 8th : https://www.nature.com/articles/s41587-019-0133-z

The book is a page turner, even knowing the outcome. Some of the most compelling parts are stream of consciousness passages written by Patterson, which got increasingly bizarre as his illness progressed, and he lost his grip on reality. It’s a testament to the power of love and dedication to science by the entire cast of characters who pulled together to make the ultimate difference in one person’s life.

Ruth Milne
over 3 years ago

Lisa Melton
over 3 years ago

What a great review. Amazing that one person's experience can re-kindle an entire field..

Jung-Eun Lee
over 3 years ago

Hi Laura, thanks for sharing this story in your equally fascinating write-up !  I first came across this story in a TIME article and became intrigued by what phage therapy can bring to the world struggling with antibiotics resistance.  Looking forward to reading the news featured in Nature Biotechnology.

A conversation with George Church 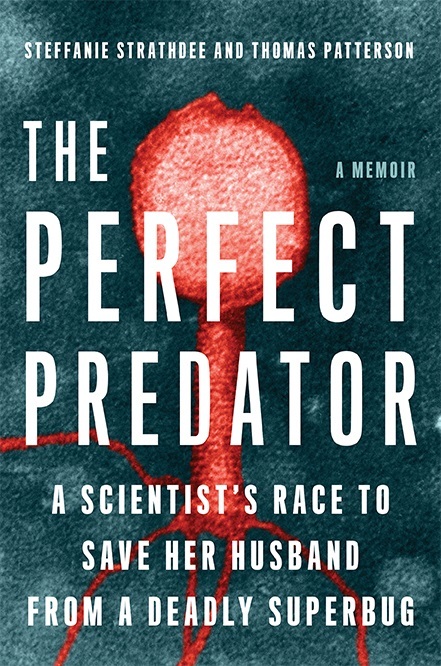