Skeletal muscle is a unique organ intentionally poised for a lifelong cycle of injury and repair. As we exercise, we strengthen our muscles by first damaging the muscle fibers, which stimulates the activation of resident muscle stem cells that become activated to differentiate into new muscle fibers. This elegant system has allowed us to routinely recover from strenuous activities and to heal from moderate injuries without a trip to the hospital. However, the balance of this endogenous repair mechanism becomes tipped in favor of chronic inflammation and deposition of thick non-functional scar tissue once a large mass of muscle has been destroyed or severely injured.  The challenge presented with such an injury involves restoring both the complex cellular components as well as tissue architecture. Not surprisingly, skeletal muscle is highly-oriented with muscle myofibers in parallel-alignment with one another along a uniform axes that maximizes contraction efficiency.  Taking a cue from nature, we designed our engineered skeletal muscle using a scaffold that exhibited nano-scale patterning to help direct the organization and function of several cell types, critical to muscle regeneration.

In previous studies, we demonstrated that spatially patterned biomaterials were capable of modulating cell phenotype and function. In one example, by complexing pathological flow profiles with nanotopographical cues, nanoscale aligned scaffolds were shown to direct endothelial cell (EC) morphology, motility, and resistance to inflammation/monocyte adhesion even in the presence of complex disturbed shear stress 1. In another study, enhanced arteriogenesis and perfusion recovery was demonstrated in a mouse model of hindlimb ischemia when treated with nano-aligned scaffolds in combination with iPSC-derived ECs 2.  Building from these observations, we reasoned that scaffolds with nanoscale aligned patterning could likely also modulate myogenic cells.

In the current study, we combined nanofibrillar (30-50nm fibril diameter) collagen scaffolds with myogenic cells and ECs to assess the contribution of both topography as well as co-culture towards enhancing myogenesis. We demonstrated that differentiation and maturation of myogenic cells into myotubes in vitro was enhanced by culture on nanofibrillar aligned scaffolds as well as with inclusion of an EC component. We further showed increased contractile function (max contraction velocity and percent contracting area) and expression of angiogenic and myogenic cytokines by this group.

Upon transplantation into a mouse model of volumetric muscle loss, these 3-dimensional (9mm x 2mm x 3mm) nano-aligned and endothelialized engineered skeletal muscles induced dense regeneration of highly organized myofibers and microvasculature, that supported greater vascular perfusion compared to constructs made from randomly-oriented scaffolds. This work outlines the contribution of nanoscale patterning and combinatorial co-culture with ECs towards enhancing integration and regeneration in a region of traumatic muscle injury. The hope is that findings from this study will inform future design questions and strategies for engineering the next generation of regenerative and biomimetic engineered tissues. 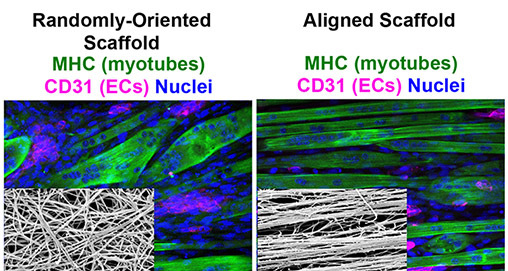