The challenge of predicting which patients with breast cancer will develop metastases leads to the overtreatment of patients with benign disease and to the inadequate treatment of aggressive cancers. Here, we report the development and testing of a microfluidic assay that quantifies the abundance and proliferative index of migratory cells in breast cancer specimens, for the assessment of their metastatic propensity and for the rapid screening of potential antimetastatic therapeutics.
Konstantinos Konstantopoulos
Follow

A microfluidic assay predicts the metastatic potential of breast cancer specimens by quantifying the abundance and proliferative index of the migratory cells within them.

Cancer metastasis is challenging to predict because every patient’s cancer is different, and even the cancer cells within a single patient’s tumour are heterogeneous. Existing technologies attempt to look at a population of cancer cells to see if they have characteristics that have been identified in metastatic patient specimens in the past, such as differentiation of shape from the healthy cells, proliferation, protein levels, and gene expression patterns. However, current application of these methods cannot faithfully predict if a patient will develop metastasis. Furthermore, many biomarkers of tumour cell aggressiveness only have predictive capability in certain types of cancer, or even subsets of those types.

Our idea to tackle this challenge was to develop a phenotypic assay that directly measures three key features of metastasizing tumor cells: their ability to move, their capacity to enter confining spaces and their potential to proliferate. Thus, this phenotypic assay provides an approach that may be easier to interpret and is specific to an individual patient’s cells.

The current gold standard for phenotypic assays to examine cancer patient progression is the patient-derived xenograft (PDX) model. In this model, a patient’s cancer cells are isolated from a biopsy and implanted into mice in order to assess if the cells display aggressive/metastatic behavior. However, a large percentage of breast cancer specimens fail to grow as PDXs, and in either case the model takes months to yield clinically useful information. To improve on this standard, our phenotypic test has to be applicable to a wider range of specimens and deliver more rapid and robust results to inform clinical decision-making.

Our lab’s research focuses on understanding the processes contributing to cancer metastasis. One of these important processes is the ability of cells to move within their surrounding environment. In particular, much of our recent work has focused on how cancer cells migrate through the confining tissue tracks created in vivo by various anatomical features. Using microfabrication techniques, we have recapitulated in the in vitro setting these channel-like tracks to study cancer cell migration. Through our basic-science research, we have learned that cells that are able to metastasize in animal models are more motile in our microfabricated models than cells that are not able to metastasize. This gave us the idea to evaluate a migration assay as a phenotypic test for screening metastatic capability.

Metastasizing cells travel through a range of constrictions and channel-like spaces with a variety of cross-sectional areas. To successfully move from the primary tumour to a distant site, metastatic cells must be able to persistently migrate over a long distance, make “decisions” when they encounter branches or forks in their journey, and squeeze through confining spaces. We designed a microchannel device – termed the Microfluidic Assay for quantification of Cell Invasion (MAqCI, pronounced max-see) – that incorporates these challenges of persistent migration, directional decision making, and squeezing into narrower channels. Importantly, MAqCI requires a small number of cells (that could be obtained from biopsy or during resection surgery), delivers results in 1-2 days, and can even be used to isolate highly migratory cells for further study.

To assess if MAqCI could be used to predict metastasis, we examined a panel of normal-like breast epithelial cells (control) and breast cancer cell lines with known metastatic potential. The aggressive breast cancer cell lines had a larger percentage of highly-migratory cells. This is in line with the fact that tumour populations are heterogeneous – with individual cells from the same cell line possessing different migratory capabilities – and our hypothesis that metastatic cells are more migratory. We also showed that the migratory cells isolated from the device had increased metastatic propensity in vivo – demonstrating that the ability to migrate was likely causal in the formation of metastasis.

After screening a panel of 25 established cell lines, we found that MAqCI could predict the metastatic potential of these cell lines with 96% accuracy based on their ability to migrate and enter confining channels. Given that cells also need to multiply in order to colonize distant organs and establish new metastatic sites, we incorporated cell proliferation as an additional phenotypic parameter to predict metastasis. To combine a proliferation measurement with our migration assay, after measuring the cell’s migration, we fixed (preserved) the cells in MAqCI and immunostained for Ki-67, a protein that is only expressed in the nucleus of proliferative cells. In our panel of cell lines, the aggressive populations tended to have more proliferating cells compared to the non-aggressive samples. We then used a machine learning technique to combine our phenotypic measurements of migration and proliferation to calculate the probability of a specimen being metastatic. Interestingly, this combined index had a 100% accuracy in our panel of breast epithelial and breast cancer cell lines. We validated the predictive power of the combined index using independent sets of engineered cell lines and specimens derived from the PDX model.

Looking forward, we plan to perform further substantiation of MAqCI’s predictive power by testing specimens from breast cancer patients and comparing their clinical outcomes with the MAqCI prediction. While biomarkers for clinical metastasis vary across different tumour locations, the requirement for cell migration and proliferation as part of cancer metastasis does not; thus, we expect that MAqCI can also be applied to other solid tumour types and are currently pursuing this angle.

Lastly, MAqCI has the potential to be applied to solve another problem in cancer treatment – the selection of effective therapeutics for specific patients. The presence of different mutations between cancer patients leads to varying responses to the same therapeutic agent. By running multiple MAqCI assays in parallel using a panel of potential therapeutics, we believe we can determine which one(s) most effectively inhibit(s) the metastatic capabilities of a patient’s tumour cells. This individualized approach to therapeutic selection has the potential of improving clinical outcomes, saving money, and potentially, lives.

In conclusion, we have fabricated MAqCI to rapidly assess a cancer patient’s risk of developing metastasis. The functional assay combines the quantitation of cell’s propensities to migrate, to deform in order to enter confining channels, and to proliferate, thereby providing an excellent predictive assessment of the specimen’s metastatic potential. MAqCI requires a small sample, delivers rapid results, screens the effect of therapeutics on highly motile metastasis-initiating cells, and physically isolates these cells for further molecular and genetic characterization. Taken together, MAqCI could be developed as a companion assay for clinical prediction of breast cancer metastasis and selection of effective therapeutic regimes. 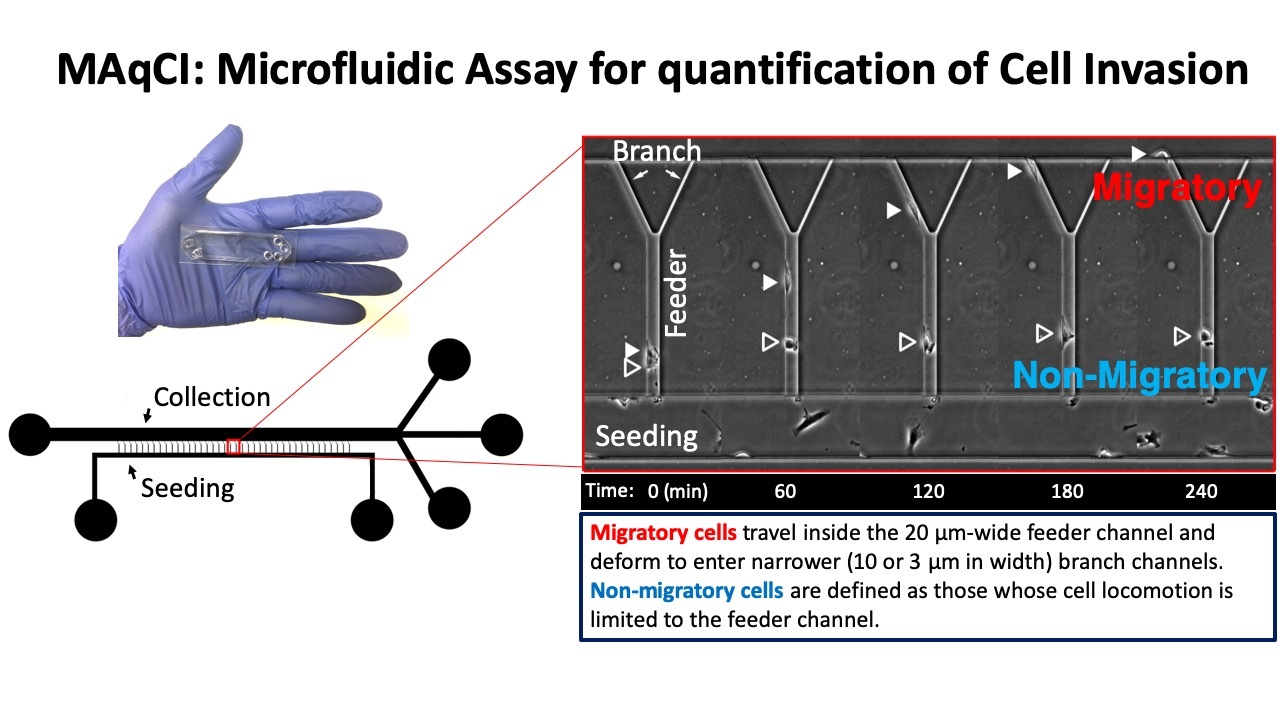 The challenge of predicting which patients with breast cancer will develop metastases leads to the overtreatment of patients with benign disease and to the inadequate treatment of aggressive cancers. Here, we report the development and testing of a microfluidic assay that quantifies the abundance and proliferative index of migratory cells in breast cancer specimens, for the assessment of their metastatic propensity and for the rapid screening of potential antimetastatic therapeutics.