Zeinab Ramashani, Chenguang Zhang et al. developed a microfluidic device that allows for quantification of extracellular vesicle (EV) microRNA from plasma. The platform does not require EV extraction, so it is able to process samples in as little as 30 minutes and requires much smaller volumes of sa…

Cancer and cancer-related illnesses continue to be one of the leading causes of death worldwide, and while we have gotten much better at treating many forms, there are some cancers, such as pancreatic and liver cancer, where the 5-year survival rates are less than 20%. One of the primary reasons is that the symptoms for these cancers do not present themselves until the cancer is at an advanced stage, such that there are few viable treatments once the cancer is diagnosed. Biomarkers that can be detected non-invasively and at a very early stage could overcome this significant problem. Recently, there has been increasing evidence that microRNA contained in extracellular vesicles could be the key biomarkers for a variety of cancers and diseases. Further, these extracellular vesicles are found in bodily fluids, such as blood and saliva, raising the possibility of detecting them during regular doctor visits and checkups with minimal impact on the patient. The challenge is detection – how do we both find the extracellular vesicles and more importantly, quantify the microRNA they hold?

This challenge is due in part to the size of extracellular vesicles, which are nanoscale-sized bioparticles that are between 2-4 orders of magnitude smaller than cells, and also the need to break them open to release their microRNA for detection, a process called lysis. Conventional protocols have relied on isolating the vesicles from a sample using a process such as ultracentrifugation, using some chemical detergent to lyse them, and finally reverse transcription PCR (RT-PCR) to detect and quantify their microRNA.  This process is not only plagued by inefficiencies that lead to inaccurate results, but requires a significant volume of sample and is time consuming, often taking over a day to run a single analysis.

Around 2014, our team led by Hsueh-Chia Chang and myself started looking at how the various microfluidic technologies we had been developing could solve this problem. Our first step was to get away from isolating the vesicles from the sample. Instead, we proposed simply lysing all vesicles in the sample itself and then detecting the microRNA directly. This would require two things – a detection technology that could handle a raw biofluid sample and a lysing technology that could lyse the vesicles without contaminating the sample. For the latter, we decided against a chemical lysing approach and instead adopted a mechanical approach using surface acoustic waves. Surface acoustic waves (SAWs) are nanoscale mechanical waves on the surface of a piezoelectric crystal. When liquid is on the crystal, the SAWs refract into the liquid and create a convective flow that shears the vesicle open to release the microRNA. Because it requires no chemicals, there is no subsequent purification from a lysing detergent, and thus can be done in a flowing microchannel at high throughput. To address the former, we decided to use our well-established ion exchange membrane sensor. To detect the microRNA, the sensor has complementary oligonucleotides on its surface that bind a target microRNA. Once the mircoRNA have attached to the surface, the electrical response of the membrane changes, and the resulting voltage shift can be correlated to the concentration of microRNA in the sample.

In 2015, in collaboration with Reginald Hill, we demonstrated this concept with two separate devices – one for lysing and one for sensing – using raw cell media from pancreatic cell cultures [1]. The next, and bigger step, was to integrate the two devices so the sample transfer is continuous and seamless and demonstrate the device on real biofluid samples to show how it could be utilized for early disease detection. The engineering challenge was getting the timing down – from the flow rate through the two microfluidic devices to the sequencing of all the electronics. The analytical challenge was achieving a high sensitivity in a complex biofluid. After many tests, we decided to incorporate a concentration step to help us achieve the sensitivity we needed – down to single pM concentrations – and ultimately we were able to reduce the processing time to only 30 minutes using only 20 microlitres of sample. Further we were able to make it work with human plasma with no prior purification or other treatment to the plasma.

At this point the integrated platform showed genuine promise, but to show both laboratory and clinical possibilities, we needed to demonstrate the efficacy of the device on real samples. We were able to connect with Bangyan Stiles as the University of Southern California, who helped us apply the device to liver cancer samples from both mouse models and human patients. This was the last piece to the puzzle, and we now confidently have a viable, high throughput, and cheap extracellular vesicle microRNA analysis platform [2].

The real promise of the platform is its versatility. In addition to microRNA, it can be applied to other RNA biomarkers as well DNA and even potentially protein biomarkers. This, in fact, may the best path forward as it is likely that not a single bioparticle can be used as a biomarker but a panel of different bioparticles. On the engineering side, the next steps are to multiplex the sensing technology to detect multiple targets simultaneously, and if successful, this could truly transform how we approach cancer and disease diagnostics. 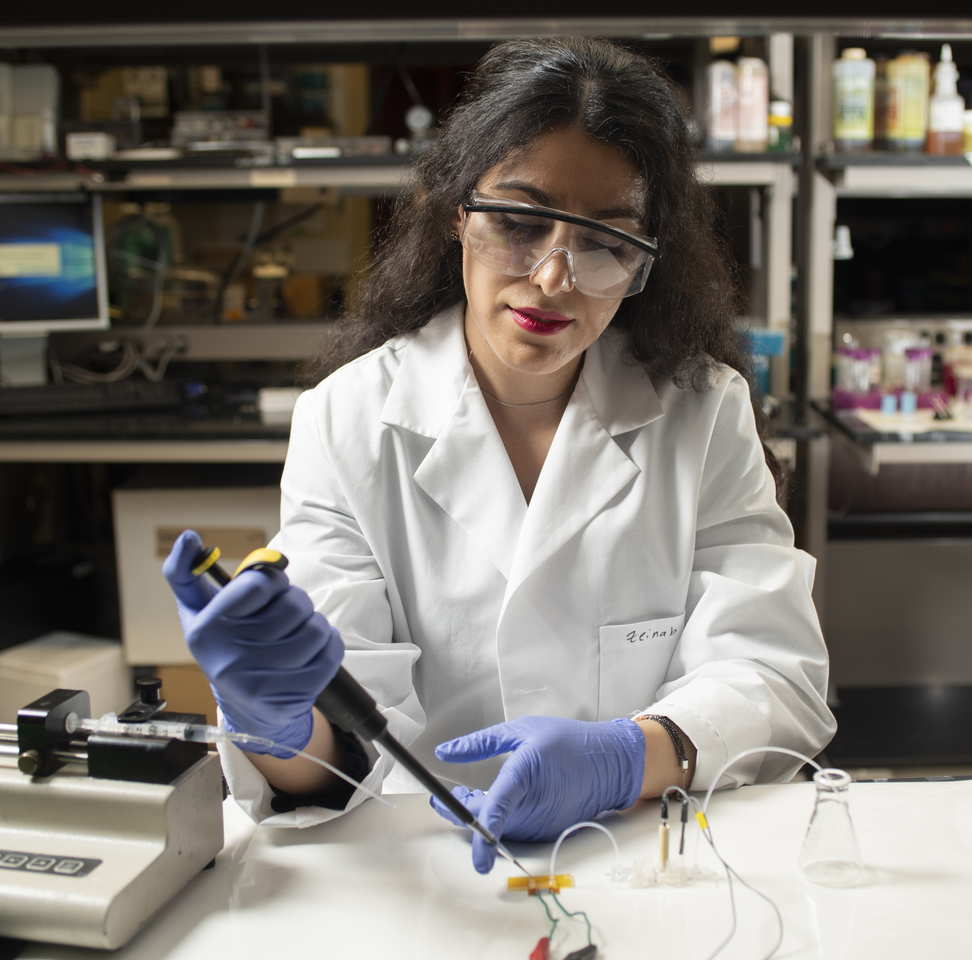