A microphysiological cartilage on a chip that enables the application of strain-controlled compression recapitulates the mechanical factors involved in the pathogenesis of osteoarthritis.

Osteoarthritis (OA) is a devastating joint disease, and the most common musculoskeletal pathology having an estimated prevalence of almost 10% of men and 20% of women over the age of 60 worldwide. Despite OA’s diffusion, however, we are still far from an effective pharmacological treatment and even the disease’s causes remain quite elusive.

This lack correlates with the paucity of adequate OA in vitro models. If you think about it, in fact, most in vitro representations are still based on administration of chemical compounds to monolayers of chondrocytes (i.e. the cartilage cells) cultured in static conditions. This is quite far from capturing the native environment of the knee, which is three-dimensional and characterized by a specific milieu. Mechanical stimulation patterns, in particular, need to be taken into account in in vitro models, considering both that cartilage dynamic loading is inherent to human motion and, that mechanical risk factors such as joint misalignment, obesity or trauma are strongly associated with OA pathogenesis.

In this NATURE BIOMEDICAL ENGINEERING paper, we present our efforts in this direction. We focused on the development of a cartilage-on-chip model in which we could induce, solely through an hyperphysiological mechanical compression, a three-dimensional miniaturized cell construct to express OA-like traits.

The whole idea stemmed from a collaboration between Marco Rasponi, leader of the Microfluidics and Biomimetic Microsystems group in Milano, and Andrea Barbero, leader of the Cartilage Engineering Unit in Basel (part of the Tissue Engineering Group led by Prof. Ivan Martin).

At the beginning of 2016 Researchers in the Tissue Engineering Group had been working on cartilage for years, getting to a clinical trial for the treatment of non-degenerated cartilage lesions and had recently begun to tackle OA.

On the other end, around the same time, Rasponi’s group, had recently developed a heart-on-chip model providing uniaxial stretching to cardiac microconstructs, thus posing the basis for mechanically active – namely “beating” - organs-on-chip. Targeting cartilage modelling through such kind of a device was maybe not the immediate logical step but the concept was there, in the air.

When we first started going a little bit deeper into the mechanics of the knee cartilage, and of OA-affected cartilage in particular, however, we were flabbergasted. There was just so much going on. Compression, surface sliding, rotation, torsion, and fluid exudation all together; all of this in a geometry, that of the diarthrodial joints, which is far from regular. It was just impossible to put all those factors in a model and still be able to control its outputs. Once we realized that, we suddenly understood that a change of strategy was required. What we did searching for an alternative approach, was dissecting the too complex mechanical behavior, looking for the simplest parameter sufficient to describe the model. Compression appeared like the most rational choice according to clinical studies.

The conceptual design, inspired from previous work of the group, is actually pretty simple: a three-dimensional cell laden hydrogel is confined by two rows of overhanging posts in a miniaturized rectangular channel. This lays on a membrane covering a pneumatic chamber. As the pressure in the chamber increases, the membrane bends upward and compresses the hydrogel while the hanging posts limit the lateral expansion. In its simplicity, we were convinced that this model could actually capture at least a bit of the mechanical alterations happening in OA joints.

Dimensions, distances and overall design had however to be guided by mathematics: the idea was to stress the finer control achievable with microfluidic devices over the experimental environment. The downstream effect we were looking for was exquisitely biological but the means to get it were derived from engineering: during the firsts months of development nothing was discussed but inertia moduli, energy functions, continuum mechanics and diffusion equations. These considerations together with the help of Emiliano Votta, the computational expert of the group, led to the first numerical simulations: the strain field achieved into the device had to be known to be able to correlate potential biological findings with a given mechanical stimulus; distances had to assure adequate solute concentration profiles.

Positing that a mechanically non physiological stimulus could be the cause of the altered cellular behavior seen in OA (i.e., increased matrix turnover, production of cartilage-degrading molecules and enhanced  expression of inflammatory factors) we aimed at a stimulus sufficient to trigger such reactions without constituting a major hinder to cellular viability. This led to the choice of a 30% compression level, which we named hyperphysiological (HPC) to indicate a level beyond the physiological one, which is around 10% (PC), but still within values observed in vivo as suggested from literature research.

Once the design was ready and the device available, it was time to go back to biology and tackle the original questions: can we obtain a tissue sufficiently resembling articular cartilage within the device? How reproducible is the process, and how efficiently can we obtain a microtissue with adequate characteristics? But, most of all, how can we do that?

A polyethyleneglycol-based hydrogel susceptible of cleavage by metalloproteases (MMPs, enzymes produced by cells during extracellular matrix turnover) was available thanks to a collaboration with Martin Ehrbar at the University of Zurich. Such an artificial matrix seemed a good place to start.

The first trials were not easy. The main issue being the adaptation of analyses conceived for far larger cell numbers and higher solute concentrations to the volumes of microfluidics. It took months before we could master all the techniques. Looking at the first immuno-stainings, for instance, none of the markers we were interested in seemed positive. Later on, following some rough calculation, written during a medium change on the glass of a safety hood, we figured the classic staining protocols did not allow sufficient time for the antibodies to diffuse through the dense, cartilage-like matrix produced in our microfluidic device, which had a thickness of 300µm.

Once we mastered the analyses technique, however, it seemed like we were moving in the right direction. It was possible to achieve microconstructs rich in constituents typical of cartilage, namely type II collagen and aggrecan, for instance. Remarkably, furthermore, although differences were visible among donors, achievement of a sufficiently mature tissue seemed to be feasible with repeatability.

During these experiments Paola Occhetta, the postdoc that together with myself was responsible for most of the work, was reading about genes upregulated during cartilage development for a different project. We investigated some of those genes, ATX and GDF5, for instance, and saw an upregulation in our model. It definitely seemed like we had our cartilage-on-chip and it was time we tested our main hypothesis.

Could we induce an OA phenotype solely though confined compression?

The foremost issue encountered in answering this question was how to define an appropriate OA phenotype. We started by looking at classical markers of cartilage degeneration (MMPs and pro-inflammatory chemokines) and found that an enhanced expression of such molecules was induced by our hyperphysiological compression. Was that enough? We did not think so. As a matter of fact, cartilage hypertrophy is another of the salient tracts of OA. Two of the most commonly used markers of chondrocytes hypertrophy, namely collagen type X and Indian hedgehog were therefore investigated and found to also be upregulated by HPC. We were still not satisfied and kept searching for a marker more directly correlated with cartilage loading and clinical evidences. From previous work from other groups we learned that the decrease in three specific markers antagonizing chondrocytes hypertrophy, i.e. FrzB, DKK and Grem 1, correlates with clinical evidences of OA, especially when considering degraded, load bearing areas of joints. These were the markers we were looking for; we could demonstrate that through a mechanical over-compression in our system cells behaved like in clinical patients downregulating the hypertrophy brakes.

Once assessed that an OA feature could be induced in our model, we then moved a step further and decided to test compounds in our devices. This was a challenging task considering that up to now there is no single drug present on the market able to reverse OA, which is the whole point of our research.  The behavior of the model could, however, be confronted with in vivo experiments and preliminary results of clinical trials currently ongoing in patients. The latter comparison, in particular was just achievable owing to a collaboration with Fidia Farmaceutici, currently working on anti OA solutions.

The results of the drug screening seemed indeed promising, the overall response of drugs in our model more in accordance with in vivo results than classical screening methodologies.

OA is a complex disease affecting not only cartilage but also the subchondral bone, ligaments and periarticular muscles, and a lot has still to be done to get to a fully comprehensive and representative OA model. Nonetheless, we strongly believe that the, work presented in this paper could represent a solid starting point towards the wide-spreading of more representative and selective in vitro tools capable of better representing the pathology and thus enabling for the screening of possible anti OA drug candidates. 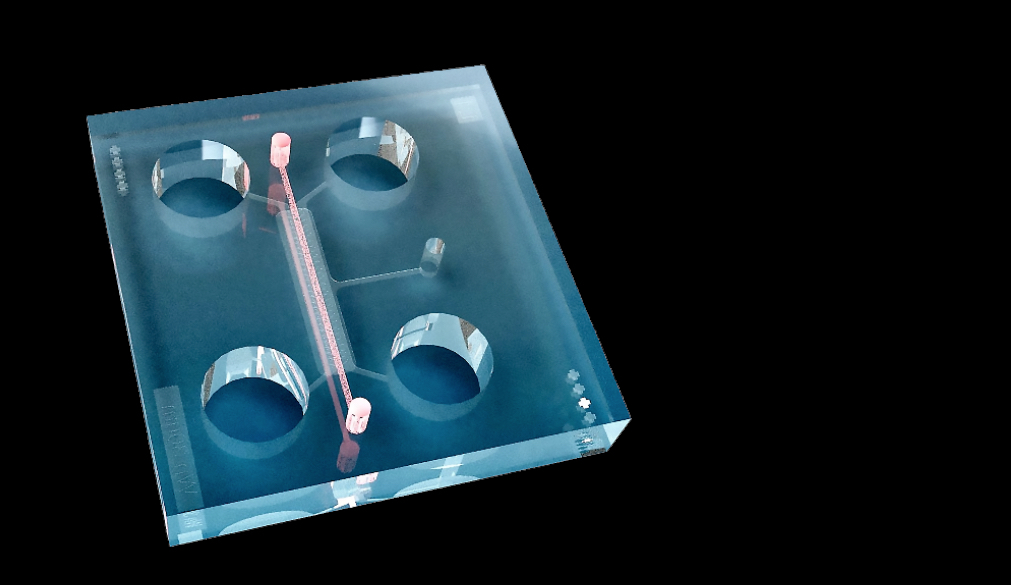