It took years to create a computer game that lets non-experts design proteins from scratch. Here’s what we learned along the way.

Earlier this month, we published a paper in Nature describing how citizen scientists are using the computer game Foldit to design brand new proteins from scratch [1].

The idea for Foldit arose on the message boards of Rosetta@home, a program we developed to distribute protein folding calculations onto the otherwise idle personal computers of volunteers. As early as 2006, participants who were stuck with a protein folding screensaver began requesting a more “hands-on” experience. This prompted us to partner with the University of Washington Center for Game Science to see if we could make crowdsourced protein science interactive.

Foldit was released to the public in 2008 and made international headlines three years later when players correctly predicted the structure of a protease from Mason-Pfizer monkey virus [2], an important target for HIV research. Later that same year, Foldit players also helped redesign the active site of an enzyme, leading to a 18-fold increase in catalytic activity [3]. This was the first clue that Foldit players had something to offer to the field of protein design.

By 2014, Foldit players were successfully crafting helical-bundles, perhaps the most straightforward folds to design. Reports from the 1980s showed that such structures can be programmed simply by repeating the right pattern of polar and nonpolar residues, without the need for atomic-level modeling [4-6]. Foldit players quickly grew bored—their solutions all looked similar, and the design process had become formulaic. But Rosetta, the molecular modeling program that undergirds Foldit, tends to score helical bundles more favorably than other folds (this is not a bug—some of the most stable proteins to date have been designed helical bundles [7]). So if players wanted to remain competitive on the leaderboard, they were forced to plug away at helical bundles.

Although we were thrilled to see proteins being designed by computer gamers, we came to believe that the creative advantages of citizen science were being squandered. We decided to revamp Foldit so that players could pursue higher-hanging fruit.

Proteins with mixed alpha/beta folds are significantly harder to design. Many of their stabilizing interactions occur between amino acids that are distant in primary sequence, making them prone to misfolding. When Foldit players were challenged to produce these more complex structures, their success rate plummeted—as expected—but we were also surprised to discover that even their best-scoring solutions failed to express as well-folded proteins in the lab.

This was a serious roadblock, as evidenced by posts on the Foldit blog. We eagerly announced the first round of alpha/beta designs chosen for testing in February 2015; there would be no further updates for two years.

Foldit players showed extraordinary perseverance through this period. At one point our lab developed a tool that would check a player’s model against a massive protein database in real-time. Although it slowed gameplay to a crawl, we kept pushing this feature. It turned out that the tool had some fundamental limitations, and we eventually had to scrap it.

In the end, we were clued in by Foldit players themselves who noticed a discrepancy in some of our protein backbone design tools. We realized then that Rosetta was inaccurate for certain backbones that are rarely seen in nature, but are regularly sampled by Foldit players. With a simple fix to the energy function and a handful of new design tools intended to guide players to more realistic solutions, Foldit players started churning out beautiful new proteins faster than we could test them.

Finding solutions to any complex, open-ended problem requires both creativity and knowledge. Foldit design works because it allows human creativity to flourish inside a knowledge-governed arena. The game itself knows the details of what molecular interactions should look like, and therefore Foldit players do not have to. Instead, they are free to let their imagination (and desire to win) guide them towards creative solutions.

This combination of automation and human creativity could soon yield breakthroughs. Foldit players are now being challenged to come up with novel proteins that bind to therapeutic targets. By introducing symmetry into the game, we are also hoping to help players create new, atomically-precise biomaterials out of protein building blocks.

Our lab published the principles for alpha/beta protein design in Nature just seven years ago [8]. We look forward to seeing what proteins citizen scientists will create in the next seven years!

By Brian Koepnick and Ian Haydon 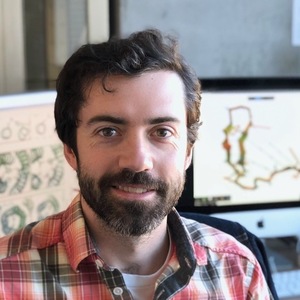