Embracing life’s uncertainties and challenges to forge your own path

The importance of education was instilled in me at a young age. I grew up in Iran and both of my parents were educators and were adamant that I received an uninterrupted and quality education. From a young age, I always had interest in math and science, which motivated me to pursue a major in electrical engineering in college only because it was one of the top engineering fields. When I first arrived in the US, I continued my studies in electrical engineering at the City College of New York. As one of the only women in the major, I pushed myself to be perfect. Although I was excelling in my courses, I felt unsure of my path. I wanted daily exposure to creative thinking and problem-solving that could lead to discovery and resolution of real-world problems and I felt that designing diodes, transistors and electronic tools was not fulfilling.

Later during my undergraduate years, I received a research fellowship through NOAA CREST (National Oceanic and Atmospheric Administration Center for Earth System Sciences & Remote Sensing Technologies). We engineered devices to collect and analyze ocean water samples and developed algorithms to monitor changes in ocean health from satellites. This was an application of electrical engineering that I had not imagined previously. This experience taught me that the field of electrical engineering was not exclusively composed of circuit design, transistors, and antennas and could be applied for the advancement of virtually any scientific field.

Painting has been a hobby of mine since my early childhood. My artistic curiosities always fixated on the form and color of the human body and I often thwarted any opportunity to paint anything else. I can remember getting lost for hours in the different tones and textures of a knee. It seemed like one knee could be composed of a hundred different colors and hues. However, my fascination with the human body never seemed to align with my academic pursuits, until a few years into my undergraduate degree, when I was accepted at Cornell University for a nanomaterial and nanoelectronics summer internship. This was the first time I was introduced to the biomedical applications of electronics. My experience at Cornell catalyzed my future pursuits in the biomedical field, as it allowed me to apply the engineering skills, the ones I had been working so hard to hone, towards something I felt truly passionate about. It was the first time that I was able to envision my post graduate career.

In 2007 I began my graduate studies in Biomedical Engineering at Rutgers University, which I completed in 4 years. I focused the majority of my research on designing blood separation devices for the continuous monitoring of a patient’s inflammatory response during open heart surgery. I was passionate about the research I was doing, but it was not without its challenges. I had my son during the first year of my PhD and there began the most difficult period of my life as I was being pulled in all directions, both as a mother and a scientist. Despite this conflict, I was able to make it work with minimal compromise. My son’s bed-time stories did not come from the classic “Goodnight Moon” children’s book, but from chapters of my organic chemistry textbook. He would fall asleep in my arms to the sound of me memorizing the properties of different aromatic compounds.

Following my Ph.D., I accepted a post-doctoral position at the University of California Berkeley in Bioengineering. My work primarily focused on designing innovative devices for drug delivery and medical diagnostics. I also received a NIH training fellowship which allowed me to develop new technologies for aging research which was and still is one of the most fascinating research areas I have been involved with. During my postdoc I was also, for the first time, able to take on a leadership role and build my own team of passionate student scientists. I loved being able to mentor and serve as a role model for my students, especially the young women who were as passionate about STEM as I was.

Berkley was also the first place that allowed me to explore entrepreneurship. I took business and entrepreneurship classes at the Hass Business School and UCSF, which inspired me to start my own company and build my network outside of the lab. Although my first company was unsuccessful, the process taught me a lot. My first few pitches to Venture Capitalists (VCs) in Silicon Valley ended in disappointment. However, I did not let these moments of frustration and failure deter me. They might have brought me to tears, or dampen my spirits for a few days, but I would always return stronger than before and eager to prove my vision.

After my post-doc, I accepted a faculty position at Keck Graduate Institute in Claremont, California, a member of the Claremont College Consortium. My lab currently focuses on combining modern biology with ultrasensitive nanoelectronics for early disease diagnosis as well as developing research tools to understand the role of blood in aging. I have also co-founded another company which aims to commercialize nano-electronic platforms to better understand biology. Designing electronic tools is what I enjoy the most now.

Throughout my career, I’ve learned that one doesn’t have to be perfect at everything. Life is difficult and will always place obstacles in your path, whether they be financial, societal, or social. Though we may feel like giving up when maneuvering these obstacles, it is important to remain persistent. If I had just one piece of advice to give to young women engineers, it would be to have a vision and never stop striving to achieve it. We don’t have to be perfect but we must never stop learning, improving and pursuing our goals. 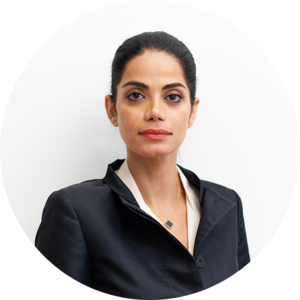 Kiana Aran is an Associate Professor of Bioengineering at Keck Graduate Institute, a member of the Claremont Colleges, and a visiting Assistant Professor at the University of California, Berkeley. She is also the Co-Founder and Chief Scientific Officer at Cardea Bio with the mission of integrating biology into modern electronics. She also serves as a Consultant of Drug Delivery and Medical Diagnostics for the Bill & Melinda Gates Foundation. She received her undergraduate degree in electrical engineering from the City University of New York and her Ph.D. in biomedical engineering from Rutgers University in 2012. She then continued her postdoctoral studies in bioengineering at the University of California, Berkeley, and was a recipient of the National Institutes of Health (NIH) postdoctoral training fellowship at the Buck Institute for Aging Research in 2015. Her research efforts focus on designing novel biosensing platforms, using 2D nanomaterials, for early disease diagnosis as well as utilizing biology as tech elements for a variety of biosensing applications and commercialization of these platforms. In addition to biosensing, she combines various engineering modules to develop tools to better understand the process of aging. Her research efforts have been recognized by many awards in science and STEM including the Clinical OMICs 10 under 40 Award and the Athena Pinnacle Award. Aran was also the recipient of the NSF Career Award to develop the next generation of electronic sensors.