Roughly 25% of mouse genes are embryonically lethal when knocked out, preventing the generation of viable mouse models. Here the authors use CRISPR/Cas9 to edit one blastomere of a two-cell embryo to generate viable chimeric mice.
Songlin Wang
Professor, Capital Medical University
Follow
Like Be the first to like this
0

Roughly 25% of mouse genes are embryonically lethal when knocked out, preventing the generation of viable mouse models. Here the authors use CRISPR-Cas9 to edit one blastomere of a two-cell embryo to generate viable chimeric mice.

Gene function in vivo is routinely determined by standard knockout methods. About 25% of the genes in mice are essential for embryonic development; when deleted, they cause embryonic lethality. The CRISPR/Cas9 gene editing system has been used to efficiently generate knockout animals in various species by injecting zygotes. However, for a substantial number of lethal mutations, especially embryonically lethal mutations, with this approach, it was impossible to obtain conventional knockout mice. Recently, fluorescent reporter, chimeric mutant mice were generated with a two-step method of injecting two-cell embryos using the CRISPR/Cas9 system for the ten-eleven translocation 3 (Tet3) gene, which leads to postnatal lethality when knocked out. This mouse model unraveled the functions of Tet3 in adult mice4. However, this method tested only one postnatally lethal gene, which accounts for less than 5% of gene knockouts in mice. In addition, this microinjection procedure is complicated, and has not yet succeeded in producing knockout mice with embryonically lethal mutations. Moreover, knockin efficiencies based on introducing CRISPR reagents into embryos at the two-cell stage were more than ten-fold higher than at zygote stages. The higher frequencies of off-target single nucleotide variants induced by cytosine base editing was 20-fold higher than those produced by CRISPR/Cas9, according to a genome-wide off-target analysis of the one-blastomere two-cell embryo injection method6. It is suggested that two-cell embryos might have great potential to produce genetically modified mouse models.

In the present study, we established a one-step method of microinjecting CRISPR/Cas9 components into one blastomere of two-cell embryos (OSTCM method) to generate surviving adult chimeric mice with an embryonically lethal mutation (Virma or Dpm1). Surviving mice were able to transmit the mutation to their offspring (F1 generation) through crossing. After heterozygous crossing, the homozygous offspring could be used to study the in vivo gene function in embryonic stage before animal death (Figure 1). In some instances, a gene has a different function in adults than in developing embryos. By examining surviving adult founder mice, we identified a novel phenotype and function of Virma. Virma knockout leads to focal segmental glomerulosclerosis in adult mouse kidneys. Additionally, we used OSTCM method to generate knockout mice with a postnatally lethal mutation of Slc17a5 or Ctla-4. By examining surviving adult founder mice, the function of Slc17a5 or Ctla-4 were also identified. Slc17a5 knockout markedly decreased sialic acid and nitrate transportation through TMEM16A and AQP5 proteins’ actions in adult submandibular glands. Ctla-4 knockout leads to Treg cell proliferation in adult mouse spleens. Thus, this method provides both a knockout generation of embryonically lethal phenotypes in mice and the ability to study their functions in vivo, thereby providing a new, simple and rapid animal model for the functional study of genes with embryonically or postnatally lethal knockout phenotypes in about 30% of knockout adult mice. 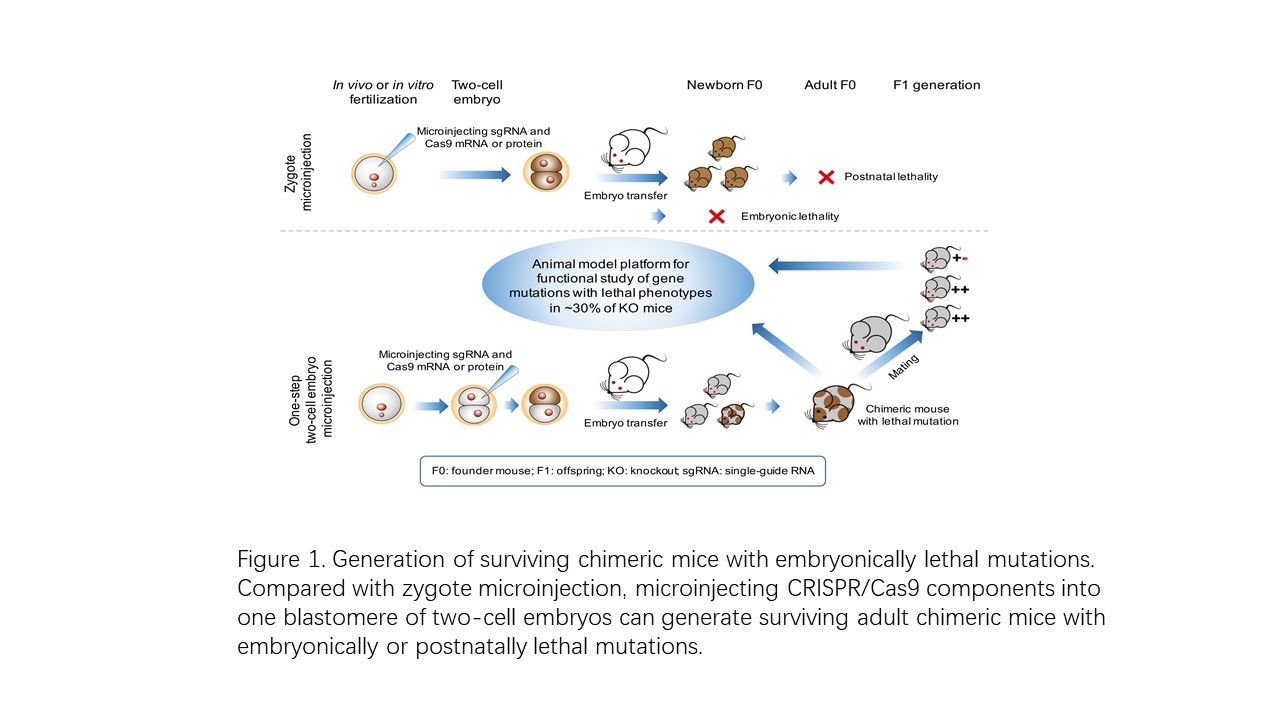 Roughly 25% of mouse genes are embryonically lethal when knocked out, preventing the generation of viable mouse models. Here the authors use CRISPR/Cas9 to edit one blastomere of a two-cell embryo to generate viable chimeric mice.