US Patent and Trademark Office data show a slowing of NIH-supported cancer patent innovation since 1995, amid criticism of an incremental rather than a high-risk, high-reward funding strategy.
Raphael Zingg
Assistant Professor, Waseda University
Follow
Like Liked by Siddarth Raghuvanshi

US Patent and Trademark Office data show a slowing of NIH-supported cancer patent innovation since 1995, amid criticism of an incremental rather than a high-risk, high-reward funding strategy.

Cancer research is a field that has been especially dependent on public funding. The National Cancer Institute (NCI), an independent institute of the National Institutes of Health (NIH), was established in 1937 to provide for, foster and coordinate research relating to cancer. As the largest funder of cancer research in the world, it has spent an estimate of more than USD 100 billion on research and treatment. New screening, diagnosis, and treatment methods in consonance with groundbreaking pathogenetic discoveries in the oncologic field, mainly in the form of oncogene and cancer metabolism research, have led to an overall decrease of the cancer death rate by a quarter since 1975. Concerns have come to light in the past ten years surrounding the current funding system of the NIH. Criticisms encompass systematic disincentivizing of funding for transformative research, the grant mechanism’s lack of predictive ability, and gender and racial biases.

Raphael Zingg, Assistant Professor at Waseda University, analyzed a set of 100,000 cancer-related patents aggregated by the US Patent and Trademark Office within the framework of the Cancer Moonshot Task Force. The study shows that the direct impact of the NIH on cancer-related inventions shifted over the years. A decline in number and share of federally funded inventions is followed by a decrease in the technological impact of those patents. These various pieces of the puzzle mirror a conservative funding strategy, rather than a high-risks high-rewards one.

Configuring grant review criteria might be a first step to strengthen the impact of funded research. Should the NIH lower its barriers for risky projects by specifying that is seeks to encourage research with potential practical impact in its criteria, reviewers might factor in the higher likelihood of failure of such ventures. Translating biological discoveries into clinical applications can further be strengthened by reinforcing targeted initiatives at the National Cancer Institute and National Institutes of Health level. In order to re-engineer translational science, a flagship initiative of the NIH was to launch Clinical and Translational Science Awards in 2005. Establishing translational cancer research as a field attractive for private investments can also be a way to complement public funds, and to help to close the gap from bench-to-bedside. 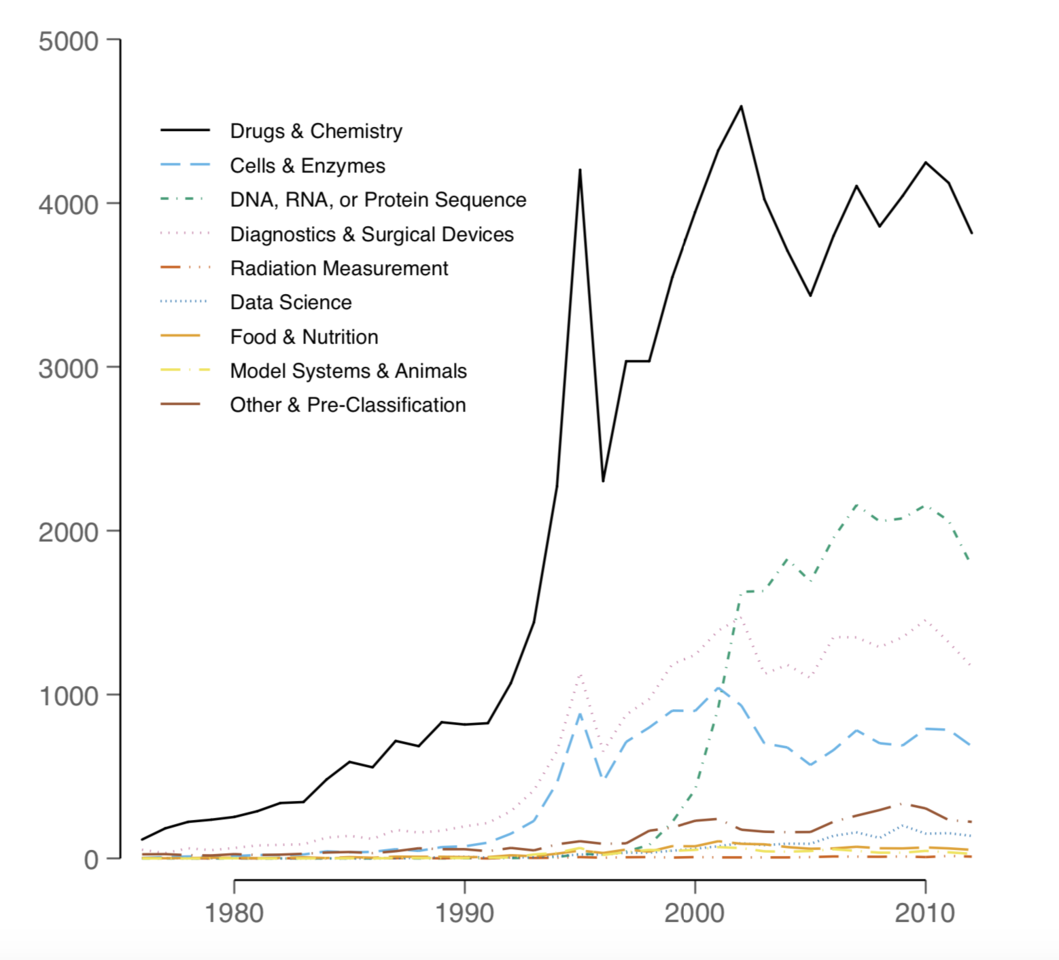 US Patent and Trademark Office data show a slowing of NIH-supported cancer patent innovation since 1995, amid criticism of an incremental rather than a high-risk, high-reward funding strategy.