Combination CARs and BiTEs for Glioblastoma: A Tale of Two Technologies

At the start of this journey, we set out to solve some of the most challenging aspects of treating glioblastoma (GBM)—designing a therapeutic that could cross the blood brain tumor, target more than one molecule to avoid having the tumor escape, and overcome the hostile microenvironment of the tumor.  We liked the idea of using chimeric antigen receptor (CAR) T cells as the backbone therapeutic, since CAR T cells can traffic into the brain better than most chemotherapies or drugs, and they are powerful killers when directed against a target present on the surface of a tumor cell. The problem with just a “typical” CAR T cell is that they usually only go after one target, and that target often has to be very specific for the tumor, or they could severely damage another organ that expresses that target. We had one very specific target for tumor cells: a mutated protein called EGFR variant III. But that target was often expressed only in a subset of the tumor cells, can CAR-EGFRvIII cells were not enough to cure glioblastoma in an earlier trial. In turns out that EGFRvIII expression is also associated with amplification and overexpression of (wild-type) EGFR, so we really wanted to go after this target.  But there was no way we would target EGFR with a powerful CAR T cell, since EGFR is expressed in the lungs, gut, and skin. Antibodies that target EGFR are sometimes used in other cancers like head and neck or colon cancer, but rash and diarrhea can occur, and sometimes that treatment has to be stopped. These antibodies also don’t get into brain tumors very well. There are smaller molecules that form a bridge between a target like EGFR and T cells – these are called bispecific T cell engagers, or BiTEs; these have been shown to work in some leukemias, but they also don’t get into the brain very well. Plus, BiTEs targeting EGFR have never been tested in humans, because of the side effects were predicted to be even worse than with antibodies.  After a lot of thought and sketches on napkins, we came up with an approach to CAR T cells targeting EGFRvIII to secrete BiTEs targeting EGFR.

Until our study, it wasn’t really clear whether the genetic material in a human T cell could actually be manipulated to simultaneously express both a surface-bound, antibody-based CAR and simultaneously secrete a BiTE, another non-native construct consisting of two single chain antibody fragments (scFvs) translated in tandem. This turned out to be quite feasible.

A critical implication of our work was the discovery that tumor-specific CAR T cells might be employed as “living” vectors for the local delivery of biologically active molecules like BiTEs to the brain tumor microenvironment. This allowed us to pursue wild-type EGFR as a homing beacon for the BiTEs, a strategy that would otherwise be deemed prohibitively. Amplified wild-type EGFR is nearly ubiquitous in primary GBM, but finding a way to mediate focal antitumor activity against tumor-associated EGFR, while leaving healthy human cells, was also a central challenge. Delivering the BiTES “on the other side” of the blood-brain barrier enabled concentrated targeting of the brain tumor while leaving systemic healthy tissues alone.

We established several new models to most accurately recapitulate the clinical setting. These include our use of patient-derived xenografts, as well as human skin grafts in immune-compromised mice to answer translational questions regarding the efficacy and safety of the combined CART.BiTE approach. Ultimately, we were able to show that CAR T cells and BiTEs could indeed be merged to achieve synergistic effects, where extremely low concentrations of secreted BiTEs were efficacious and safe against heterogeneous brain tumors. Although we couldn’t test effects of the hostile tumor microenvironment in these studies, we are particularly excited about the potential of the BiTES to also turn regulatory T cells into killers, which has been shown to occur in other studies, and we confirmed in vitro. We hope to open a clinical trial with these CAR.BiTEs soon, pending additional funding, because we think this approach may help patients with this devastating disease.

Part of what makes the field of CAR T cells so fascinating is the ability to manipulate genetic material to an unprecedented degree. In our laboratory, we are continuously taking advantage of emerging techniques and developments in modern molecular biology. Thank you for your interest and for reading about our work. Our hope is that novel therapies like CART.BiTE will truly change the lives of people with GBM, to alter the course of the disease and offer hope for those who need it the most. 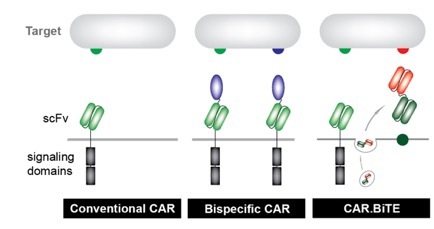 Combination CARs and BiTEs for Glioblastoma: A Tale of Two Technologies