Identification of a divalent siRNA chemical scaffold for potent and sustained modulation of gene expression throughout the central nervous system.

A divalent siRNA architecture enables sustained silencing of gene expression in deep regions of the brain.

RNA interference (RNAi) is an endogenous cellular mechanism that can be re-programmed to enable sequence-specific silencing of any target gene, and thus has therapeutic potential for many previously untreatable diseases. In the Khvorova lab, we modify the chemical architecture (ribose, backbone, and terminal phosphate) of small interfering RNAs (siRNA) to improve their stability in vivo, enhance their accumulation in target tissues, and sustain gene silencing for extended periods of time. The ability to chemically modify siRNAs has catapulted the field in a new direction—in vivo delivery of conjugated siRNAs can be achieved without formulation minimizing toxicity, and the duration of silencing is longer than non-modified or formulated variants, even at lower doses. Currently in the clinic, chemically modified siRNAs can silence genes in liver for up to a year after a single administration.

Chemically modified siRNAs are informational drugs—the base sequence determines its target mRNA, while the chemical architecture dictates pharmacokinetic behavior, allowing siRNAs chemical structures to be easily reprogrammed to target any gene sequence. This concept has been well demonstrated in the context of hepatic delivery: the multi-valent N-acetylgalactosamine (GalNAc) ligand, which binds the asialoglycoprotein receptor on hepatocytes, can be conjugated to siRNAs for delivery to the liver. While it took more than a decade for a pioneer RNAi company, Alnylam, to develop this liver-delivering chemical architecture, now more than a dozen compounds are advanced into the clinic. The great success of GalNAc-conjugated siRNAs in liver inspired the Khvorova lab to venture into other organs. Specifically, we wanted to identify chemical architectures that would achieve widespread distribution and sustained silencing throughout the central nervous system. We hoped to accomplish for the brain what GalNAc-conjugated siRNAs had done for the liver.

Traditional monovalent, cholesterol conjugated, hydrophobic siRNAs consistently showed limited distribution throughout the brain. Consequently, we investigated several architecture variations, focusing on different degrees of hydrophobicity and valency. We hypothesized that altering the hydrophobicity would reduce the “stickiness” of the siRNA and spread its distribution throughout the brain, while increasing valency between duplexes would facilitate uptake into cells. Indeed, our architecture (Fig. 1)—consisting of two phosphorothioated siRNA molecules connected through a neutral linker—achieved widespread distribution and silencing efficacy throughout the mouse brain (Fig. 2). Further studies showed that uniform brain distribution extends to non-human primates, whose size and brain physiology more readily reflect that of humans. The ability to modulate gene expression in rodent and non-human primate brain opens a lot of opportunities for novel drug development for neurological disorders. In addition, this novel technology platform will allow investigation of the role of different genes in brain function, aging, and disease in the context of a living brain—a longstanding dream for many neuroscientists worldwide.

The data published in this paper truly showcase the unique multidisciplinary nature of the Khvorova Lab. To truly perform impactful and translational research in the siRNA field, it is necessary for individuals with expertise in chemistry, biology, and pharmacology to interact daily, and combine their knowledge. Each arm of the Khvorova Lab maintains excellence in its focused disciplines while increasing knowledge of the other, allowing for fruitful problem solving and creative thinking. Furthermore, the vertical integration of the team allows us to take an idea and see it through the chemical synthesis, biochemical, in vitro, in vivo, and hopefully, preclinical processes. It is a special place in which biologists can create novel compounds that are tuned to function in specific biological contexts, and where chemists can test their creations in biologically-relevant systems within weeks.

We truly believe that RNAi-based therapeutics, including chemically modified siRNAs, will comprise a new frontier in medicine. We hope that this paper will be one of many showcasing the impact of siRNAs in translational research. 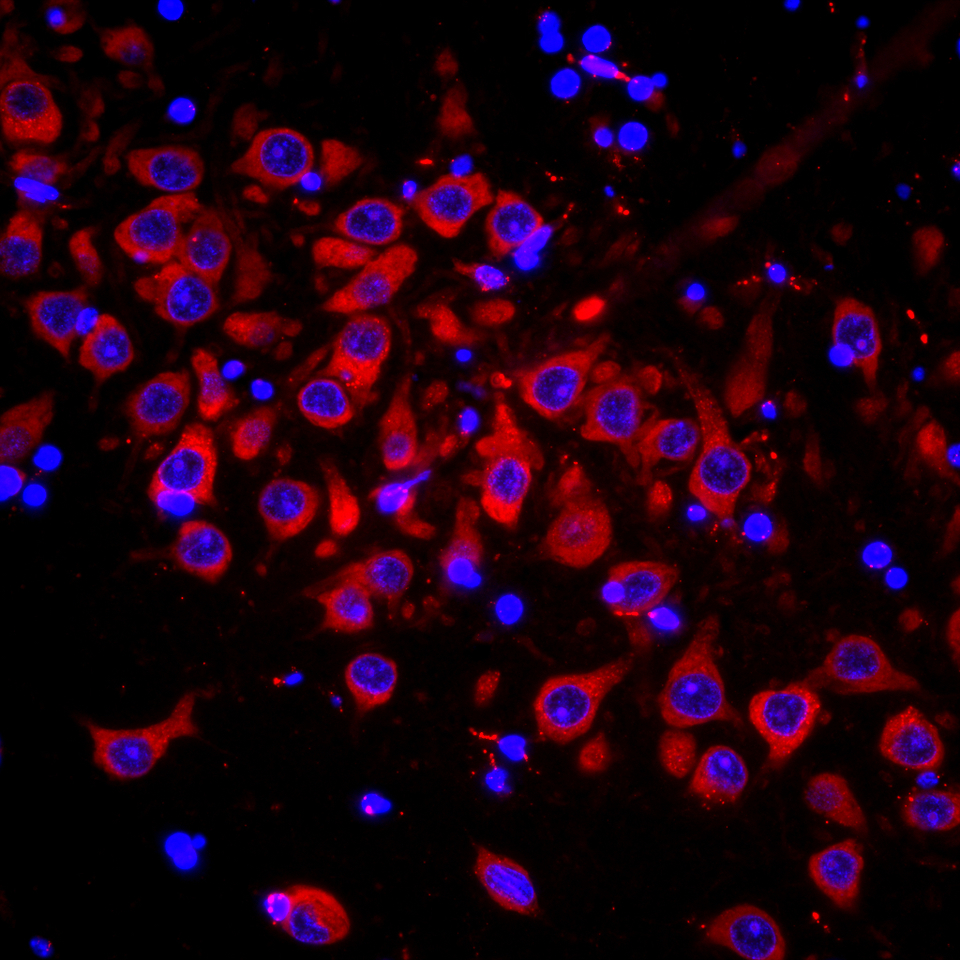 Identification of a divalent siRNA chemical scaffold for potent and sustained modulation of gene expression throughout the central nervous system.