One of the grand challenges of the 21st century has been to understand the language of the brain -- the neural code. Illuminating how the brain represents and processes information not only improves our knowledge of the nervous system but will allow for the development of novel therapies to treat neurological disease at the cellular level, which has been the focus of the biotech and pharmaceutical industries for decades. In our paper, we argue that in the case of electronic neural interfaces one can now define a clear pathway towards what we call "precision electronic medicine" whereby stable mapping, tracking, and modulation of the same individual neurons and neural circuits over extended periods of time will unlock new avenues for delivering personalized therapy to individuals with complex neurological and psychiatric disorders, as well as powerful control of prosthetics for restorative function in degenerative diseases, trauma, and amputation.

Recently, both private and public large-scale funding efforts across the globe have helped to bring attention to improving our understanding of how action potentials, which are produced by neurons when they ‘fire’, encode and communicate information. Significant progress has been made in numerous areas of electronic neural interfaces, including motor control, decision-making, and learning and memory. Despite this success, limitations in the ability to stably interface with and track the activity of large numbers of neurons over extended periods, suggests we have only scratched the surface of what can be achieved in illuminating the language of the brain and using this for guiding precision medicine.

Traditional neural interfaces embody a range of forms, varying in size and structure. Electroencephalography (EEG) and electrocorticography (ECoG) electrodes have large surface areas and rest the farthest away from neurons, thus measuring the activity of hundreds of neurons simultaneously. On the other hand, microelectrodes are linear probes or arrays of probes that insert directly into the brain and can resolve the activity of individual neurons. A challenge with both types of electrodes is the long-term degradation of the neural interface in living tissue. Over time glia cells in the brain mount an immune response to the foreign object and attempt to sequester the electrode from the host tissue, resulting in the degradation of the interface and the longevity of the probe (Figure 1).

The root cause of the immune response arises from a fundamental mismatch between the structural, mechanical, and topological features between the probe and the brain. To increase the quality of the neural interface, a design approach that attempts to minimize the differences in physical properties between the probe and the brain is required, what we call tissue-like electronics. The development of ‘mesh electronics’ neural probes in the Lieber group has addressed these considerations. Mesh electronics have cellular to sub-cellular sized components on an ultra-flexible two-dimensional scaffold with a bending stiffness comparable to the brain tissue or even as flexible as individual axons. This new class of neural probes can be readily inserted in the brain with a standard syringe and even interface with complex anatomical structures of the nervous tissue, such as the concave retina surface within the eye.

A number of studies using mesh electronics have now shown minimal to an absence of chronic inflammatory response over prolonged periods reaching more than a year. Stable recordings from the same sets of neurons over this period provide first-of-its-kind data on how circuit-level changes occur with behavior and experience. Moreover, when the probe and brain become seamlessly integrated, interesting properties previously not considered begin to emerge. For example, when the scaffold substrate of the mesh probe closely resembles neural axons in size and form, reported data from the Lieber lab demonstrates that newborn neurons can migrate along the scaffolding of the mesh, as they would on guiding axons during development to reach their target brain region. This opens up possibilities for using electronically active neural interfaces for therapies in neurodegenerative diseases such as Alzheimer's and stroke.

We suggest that this work addressing how to “build” an intimate and long-term stable interface between electronics and the constituent cells of the brain can be married with advances in silicon chip design and fabrication, which can be used for large-scale multiplexing, signal processing and feedback, to produce neural interfaces that can map and modulate large numbers of neurons and corresponding neural circuits over large regions of the brain and long periods of time. Putting the pieces together in this manner can usher in precision electronic medicine in the brain!

This article was jointly written by Shaun R. Patel and Charles M. Lieber. 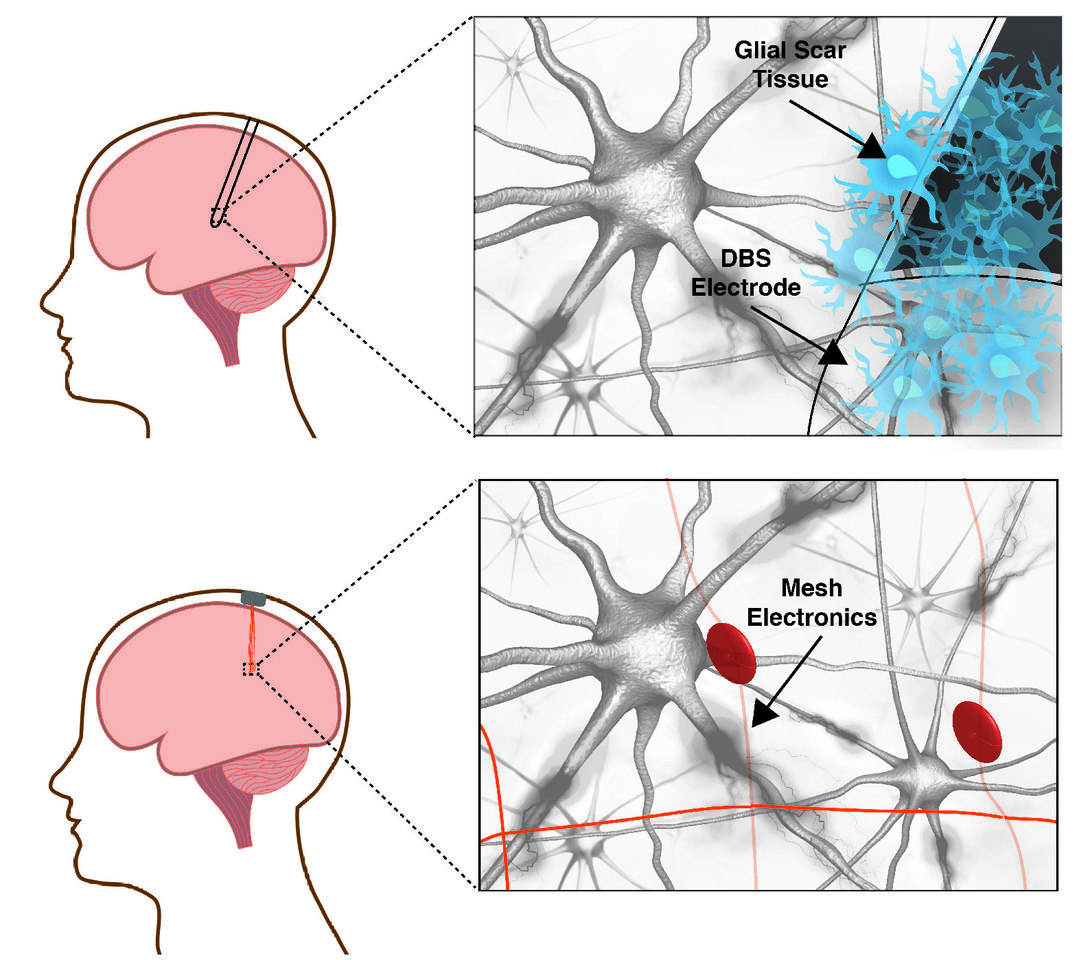