Using CRISPR-Cas9 to inactivate commonly found antibiotics in actinomycetes, such as streptothricin and streptomycin, unearths hidden biosynthetic potential to allow for new antibiotic discovery.
Elizabeth Culp
Postdoctoral Fellow, Yale University
Follow
Like Be the first to like this
0

It is amazing to think how many things have changed, and how much remains the same, since Selman Waksman first discovered antibiotics from a family of soil bacteria called Actinomycetes in the 1940s. The Waksman Platform for antibiotic discovery, whereby actinomycete extracts are screened for killing activity against an indicator strain, quickly led to the discovery of two of the most common antibiotics in nature, streptothricin and streptomycin1. With various improvements and modifications, this platform is still used almost 80 years later. To this day it is plagued by the same fatal flaw: the rediscovery and removal of known compounds, a process called dereplication.

As actinomycete enthusiasts, dereplication haunts antibiotic discovery efforts in my lab, as it has in every pharmaceutical and academic lab that came before us. In an effort to ease the dereplication burden, a previous postdoc in the lab, Georgina Cox, developed a platform to quickly identify known antibiotics using activity against susceptible and resistant E. coli as an indicator2. Using this platform, streptothricin and streptomycin producing actinomycetes quickly piled up, spurring frequent discussions around the lab office about why these antibiotics are so common.

From these experiences, we decided to reinvestigate discarded actinomycete strains by CRISPR-inactivating the production of common antibiotics like streptothricin and streptomycin. Practically speaking, this approach has several advantages; it would allow us to make use of a large percentage of strain collections producing known antibiotics and mine them for other active compounds whose activity is otherwise masked in the wildtype background. By making use of conserved sgRNA target sites, the same targeting plasmid can be used in a wide range of strains without the need for genome sequencing. Genetically inactivating production also liberates precursors or rewires genetic circuits in order to boost the production of other compounds to promote the discovery of rare antibiotics.

My co-author Dr. Grace Yim and I spearheaded efforts to rapidly and scalably CRISPR-inactivate streptothricin and streptomycin production in actinomycetes. In a year we had developed a platform, tested it on five different genes in eleven different actinomycete strains, and generated 25 unique engineered strains. In the realm of actinomycetes where strains can take a week to grow, this was fast!

The remainder of the project was spent characterizing these strains. Using LC-MS based metabolomics, we found that our engineered strains had shifted metabolic profiles and that several metabolites were produced in higher quantities in these strains. RT-PCR on select metabolites verified our hypothesis that this occurred through transcriptional rewiring, but also that redirection of metabolic flux played a role. We observed the production of antimicrobials unmasked by the removal of streptothricin or streptomycin in a large proportion of our engineered strains, and performing bioactivity guided purification led us to identify rare compounds as well a metabolite not previously described to have antibiotic activity, 5-chloro-3-formylindole.

In my mind, the power of our approach lies in the numbers. The Golden Age of antibiotic discovery saw pharmaceutical companies build libraries of hundreds of thousands of strains that were mined for bioactive compounds. Today, these natural product divisions have shut down due to challenges associated with dereplication, among other technical and economical issues. Our platform has the ability to reinvigorate these historic strain collections. Though the platform is generalizable to any undesirable genetically-encoded metabolite, targeting streptothricin alone would salvage the biosynthetic potential of thousands of these strains. Adding to a toolbox of other methods that are continually being developed, the time is ripe for picking novel natural products from actinomycetes. 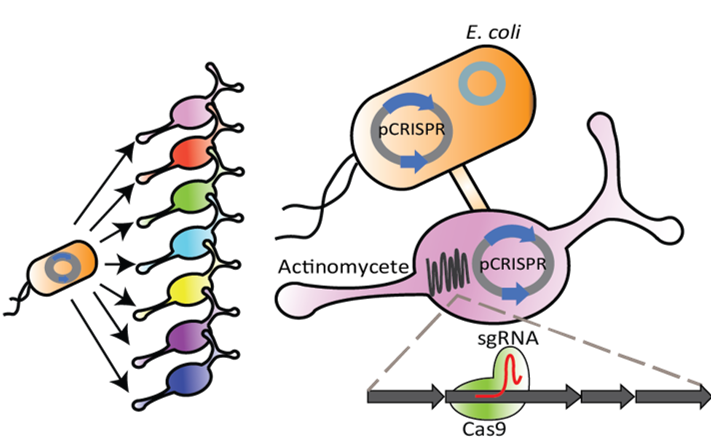