Landmarks of early stages of human embryogenesis can be recapitulated in a highly controllable and scalable fashion by culturing human pluripotent stem cells in a microfluidic device.

Over the last decade, scientists have leveraged the amazing developmental potential and self-organizing properties of human pluripotent stem cells (hPSCs) to develop multicellular models to mimic some key milestones of the development of the human embryo.  These so called human embryo-like structures have significant potential for advancing human embryology, embryo toxicology, and reproductive medicine.  Back in the year of 2015, the Fu lab started a collaboration with Dr. Deborah L. Gumucio’s lab at the University of Michigan to explore how mechanical signals in the three-dimensional culture environment of hPSCs would affect their self-organization.  To their great surprise, the research team discovered that under some engineered three-dimensional culture environment with suitable mechanical signals, hPSCs would spontaneously self-organize and morph into spherical colonies containing a single central hollow lumen.  Importantly, while hPSCs underwent lumenogenesis, the cells differentiated and turned into amniotic ectoderm-like cells; the amniotic ectoderm in vivo would eventually become a part of the amnion membrane that encloses the developing fetus.  Very excitingly, in a subset of these cell colonies (5% - 10%), the research team discovered some tissue phenotypes that display prominent asymmetry and bear significant similarity to the development of the peri-implantation human embryo: an asymmetric embryonic-like tissue, with the amniotic ectoderm-like cells at one pole and the epiblast-like cells at the opposite pole.  These initial exciting observations were published in two consecutive journal publications (Shao, Y. et al. Nature Materials 2017; Shao, Y. et al. Nature Communications 2017) and had generated significant excitements as one of the first few human-relevant, stem cell-based models to mimic the mysterious peri-implantation human embryo development.

After these initial exciting observations, we started thinking about how we could leverage microengineering tools in conjunction with the developmental potential and self-organizing properties of hPSCs to improve the controllability and reproducibility of the development of human embryo-like structures.  In fact, it is known that conventional three-dimensional cultures of human stem cells to generate multicellular structures suffer from limited controllability and significant heterogeneity, making them suboptimal for mechanistic studies or high-throughput screens.  Our first two publications (Shao, Y. et al. Nature Materials 2017; Shao, Y. et al. Nature Communications 2017) to generate human embryo-like structures from hPSCs are good examples where the uncontrolled, “random” self-organization processes of hPSCs could lead to a very limited efficiency of the development of embryonic-like tissues.

Thus, in 2017 we decided to incorporate microfluidics, which is known to control precisely fluids and chemical environments in miniaturized channels, into our research using hPSCs to generate embryonic-like tissues.  As presented in the new Nature paper, this new microfluidic system can trap little balls of hPSCs in an array of microfluidic structures in such a way that prescribed chemicals can be delivered to cells only on one side of the ball.  The microfluidic delivery also allows control over the timing of these chemical signals.  So now we can control precisely when and where hPSCs in the cell colony are stimulated by chemical signals to control their development and differentiation.  These chemical signals then control the continuous progressive development of hPSC colonies to mimic the post-implantation development of the human embryo.  The controllability and scalability offered by this microfluidic model are what will be needed for the development of reliable experimental platforms for basic research and high-throughput screening applications.  With our new system, we can now create human embryo-like structures with an efficiency of about 95 percent, setting up a new standard for the field of the development of human embryo-like structures.  As shown in the Nature paper, using this powerful microfluidic model, we have further obtained data suggesting some developmental mechanisms that may be unique to human development.

This microfluidic embryological model is a powerful tool opening up a window to examine a previously inaccessible period of human development.  A lot of hypotheses can be conveniently tested using this microfluidic embryological model to advance human embryology without using human embryos.  It can also be further developed into a high-throughput drug and toxicity screening platform to prevent pregnancy failure and birth defects.  Nonetheless, we should stress that the embryonic-like tissues generated from hPSCs do not have human organismal form or potential, and thus should not be considered equivalent to intact human embryos, given that they lack important extraembryonic linages (the primitive endoderm and the trophoblast) that are needed for the development of the placenta and the yolk sac.  The development of hPSC colonies in the microfluidic device could never go on to be anything beyond small colonies of cells.  What we've achieved in this new Nature paper is to coax hPSCs into organizing and behaving in ways that resemble some key aspects of the human embryo development for a limited time window. 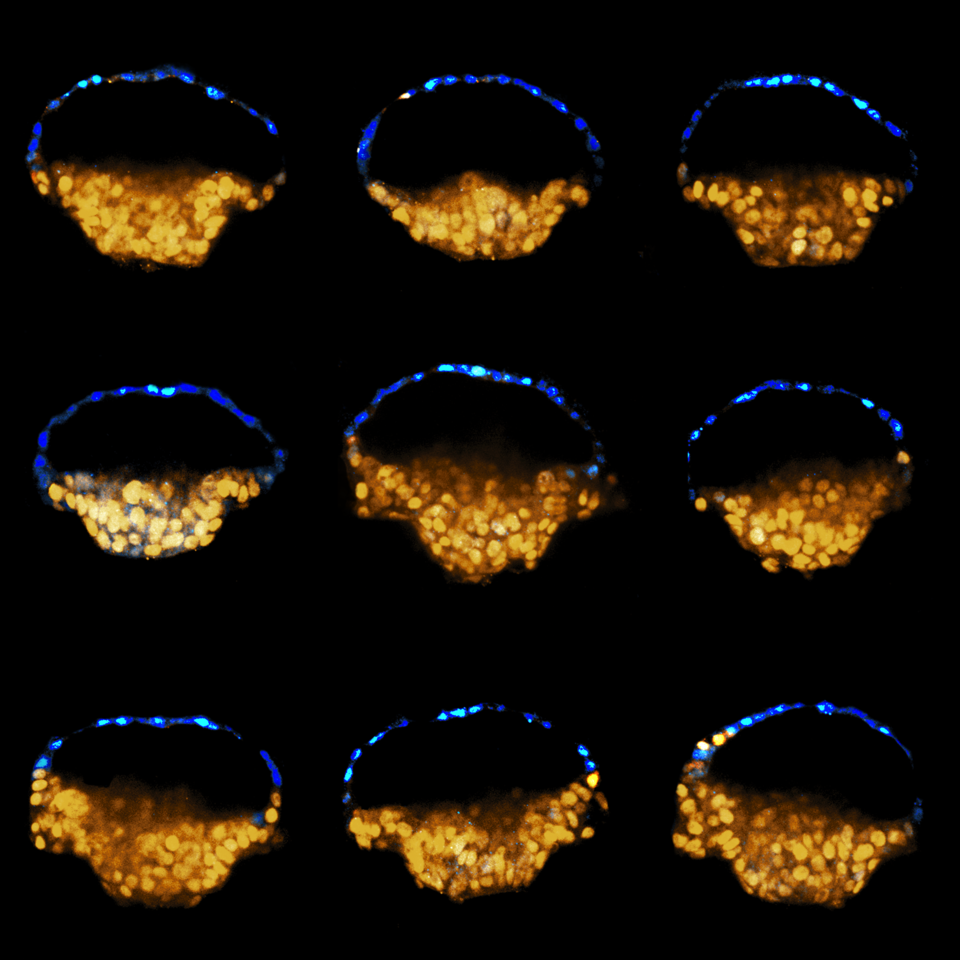