Taming the uncultured: a new approach to target elusive microorganisms for cultivation.

By using published sequence data to engineer fluorescent antibodies specific to target organisms, flow cytometry can enable the cultivation of microorganisms that have been difficult to capture by traditional methods alone.

Nearly every environment on the planet is dominated by uncultured microorganisms. Even our bodies teem with many microbes that we know little, if anything, about. Thanks to DNA sequencing we can determine what wild microbes are present in those places and begin to rationalize what they might be doing there. As a result, we have now filled numerous databases with a lot of sequence data in the form of A’s, G’s, C’s and T’s. Yet, the number of microbes that we can culture in the lab is barely inching up. Without cultures of these microbes in hand, it is hard to prove what they can do and who their friends or foes are. To overcome this bottleneck, one has to get creative. So we asked, “can this deluge of sequence information be leveraged to culture the very microorganisms they came from”? Considering this, we developed what we call a “reverse-genomics” cultivation approach that uses DNA sequences of uncultured microbes to “fish out” specific cells for laboratory cultivation. Especially those microbes that are very rare, like a needle in a haystack, and difficult to get to by traditional methods. Within the sequences of rare microbes we searched for proteins that may be exposed on the outside of the cells based on the genes in their genomes. We then generated antibodies that can bind those proteins and, we predicted, that if the antibodies are fluorescent they would harmlessly “light-up” the cells they bind to. Consequently we can now fish them out with a flow cytometer to further sequence their DNA or place them in conditions where they would be happy and multiply (Figure 1).

Figure 1. Flow cytometry enabled single-cell sorting for microbial cultivation. A. Flow cytometer system in a sterile hood allowing for the measurement of over 5000 cells per second to screen for taxa present at low abundance. B. Example of an agar plate with a 100 cell grid where each colony began from a single sorted cell or multiple cells attached to each other.

To test this idea we selected the human oral cavity for investigation. Our mouth is home to over 750 types of microbes, of which about a third have never been cultured. Of these, some belong to entire phyla that have no representatives in culture and have been given acronyms like TM7, SR1, and GN02. Within the human oral cavity there are over a dozen distinct lineages of TM7 bacteria present at abundances of <1% of the microbial community. Just a few years ago there were no cultured representatives of this ubiquitous group, so we selected it as the target for developing a reverse-genomics enabled cultivation approach. In the meantime, the first representative from the TM7 phylum, called TM7x, was cultured by a group of researchers at UCLA1. Remarkably, TM7x was shown to live on oral microbes from the Actinobacteria group as a required part of their lifecycle. If all TM7 bacteria, and potentially many of these other lineages of microbes that remain uncultured, require other bacteria for growth then any isolation method needs to preserve such interactions for cultivation to be successful. Since antibodies bind to the cell surface there should be little to no disruption of such specific microbe-microbe interactions.

By using antibodies specific to TM7 bacteria we drastically increased their abundance from less than 1% of the microbial community to being the dominant member in enriched cell populations. This facilitated the cultivation of three new TM7 species and sequencing of 23 single-cell genomes. Of the new TM7 isolated, each were sorted with their own bacterial host and we found that some can use more than one type of host. This demonstrates that these physical cell-cell interactions between microbial species can be readily preserved and facilitate the cultivation and characterization of these relationships. Such specific interactions are next to impossible to predict from genome sequences alone.

Fishing out uncultured microbes in our mouths is just one example of how a reverse-genomics approach can be applied to culture novel microorganisms. There are still many kinds of bacteria and  archaea that remain uncultured in the laboratory and some may also require interactions with other microbes for survival. As this strategy is applied to more microorganisms from different environments, who knows what potential one may unlock from the elusive branches of the tree of life. 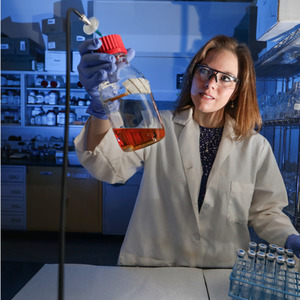