Adenosine base editor is an enzyme that catalyze adenine deamination on a specific site. Here, however, the authors proved that it also induces cytosine deamination.

Most genetic diseases are derived from single nucleotide variants (SNVs) rather than insertions or deletions (indels). Therefore, when Dr. Alexis C. Komor and Dr. Keiji Nishida reported the first base editors (BEs) which deaminase cytosine, my lab members and I knew that they would revolutionize genetic therapy approaches. Compared to Cas9, which mostly introduces random indels, the genotypes and the phenotypes induced by BEs are quite predictable. After the development of cytosine base editors (CBEs), I tried to establish BEs targeting adenine, which also has an amine group, with known adenine deaminases. However, I was not successful with that and there hadn’t been any report about adenosine base editors (ABEs) for more than a year. After the development of the first ABE by Dr. Nicole M. Gaudelli, I realized why I (and maybe others) failed. In nature, various cytosine deaminases acting on a single strand DNA (ssDNA) are known, which can directly target the non-target strand of a CRISPR-induced R-loop, which is exposed ssDNA. However, most of the naturally existing adenine deaminases are known to target double stranded RNAs (dsRNAs) which are quite far from our intended target: ssDNA on CRISPR induced R-loop. Dr. Nicole M. Gaudelli, in her Nature paper, artificially evolved the new adenosine deaminase to work on ssDNA, starting from the TadA which is an adenosine deaminase that acts on tRNAs in Escherichia coli. Their elegant success was able to be accomplished as they didn’t settle for using a pre-existing enzyme but proceeded to develop a totally new enzyme instead. However, this raised a question in my mind: What would be the characteristic of this novel enzyme?

To investigate the properties of the enzyme, we introduced several base editing events in human cells by ABE. We designed 22 endogenous target sites which had previously been targeted by Cas9 nuclease quite efficiently. Just as reported, ABEs worked efficiently proving its robustness. However, very surprisingly, I observed the conversion of cytosines in addition to adenines on the target sites in every cell that I tested and even in in vitro reactions. I assumed that this might be a side effect of the artificially developed hyper-active enzyme and proceeded a deeper investigation. Many deaminases have their preferred motifs: for APOBEC, it’s -TC. Therefore, I speculated that there might be a preferred motif for cytosine editing of ABE and confirmed it indeed has preference on the -TC motif through the investigation of nearly one hundred endogenous target sites. The unexpected cytosine conversion activities were restricted to a narrow window, positions 5 to 7 compared to wider window for the adenine deamination. In summary, we demonstrated that this evolved adenosine deaminase also acts on cytosines. Surprisingly, TadA and APOBEC shared consensus motifs on their active sites. We suspect that somehow, the cytosine editing activity and preference on -TC sequence is related to this shared motif.

This paper can be a cautionary tale for ABE users, to avoid -TC sequences in positions 5 to 7 to inhibit unexpected cytosine editing that would result in unintended amino acid changes on their target proteins. However, this finding also suggests another usage of the ABE. Unlike CBEs which convert most of the cytosine on their wide window, ABEs precisely converted cytosines located after thymidine. These unexpected side effects of ABE could be useful for precise cytosine editing like -TCC- to -TTC- or -TGC- editing in gene therapy. If we use currently described CBEs, we would obtain mostly -TCC- to -TTT-. Dr. Bae’s research group is also developing a “clean” version of ABEs which only targets adenines without targeting cytosines, which is necessary for precise adenine editing.

I thank Dr. Billy T. Lau, You Kyeong Jeong and Dr. Sangsu Bae for their help for this posting. 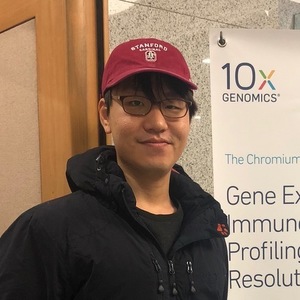