A community from Nature Biomedical Engineering
Regular Contributor
Behind the Paper

Polystyrene as substrate and bovine serum albumin as feedstock have long been the cell culture workhorses in our quest to understand biological mechanisms in health and disease. Yet, neither really resembles the biological source material they are intended to supplant, raising questions as to what we’ve been missing. A recent report by Aguado and colleagues in Science Translational Medicine [1] shows how combining engineered hydrogel substrates and patient-derived serum can provide new understanding of myofibroblast deactivation following aortic valve replacement.

This work started with a hypothesis, namely, that the efficacy of transcatheter aortic valve replacement (i.e., “TAVR”) stems from a change in serum factors released during the post-implantation inflammatory response. TAVR is used clinically to treat aortic valve stenosis, a disease in which aberrant fibrosis and/or calcification of aortic valve leaflets leads to heart failure. Understanding how patients respond to TAVR has significant implications regarding overall patient outcomes after the procedure.

Aortic valve stenosis is characterized by chronic activation of fibroblasts into myofibroblasts that drive tissue stiffening. TAVR has been shown to promote remodeling of fibrotic cardiac tissue and reduce activation of myofibroblasts; however, the mechanism by which implantation of an artificial valve drives this response was unknown.

To close this gap, Aguado teamed up with cardiologists and experts in fibrosis (Schuetze, Sucharov and McKinsey), biologists (Ceccato and Leinwand), biostatisticians (Tan), geneticists (Taylor), and fellow bioengineers (Grim, Walker, Cox, and Anseth).

The team first screened pre-TAVR and post-TAVR patient serum to identify factors that are up- or down-regulated, and sought to test the role of prominent factors in mediating valvular and cardiac myofibroblast activation and deactivation. The practical challenge here is that conventional tissue culture polystyrene substrates induce rampant myofibroblast activation. To address this, they relied on hydrated polymeric gels developed in the Anseth lab, which have stiffness that is comparable to healthy and diseased valve and cardiac tissue. Their results demonstrate that post-TAVR sera can drive myofibroblast deactivation, but not for every patient tested (Figure 1). Interestingly, levels of myofibroblast deactivation correlated with key echocardiography measures of patient disease severity, thus providing a clinically relevant in vitro model to evaluate patient responses to TAVR. The team also observed sex-dependent differences in myofibroblast deactivation by post-TAVR serum, which corroborate sex-specific TAVR outcomes observed in the clinic. 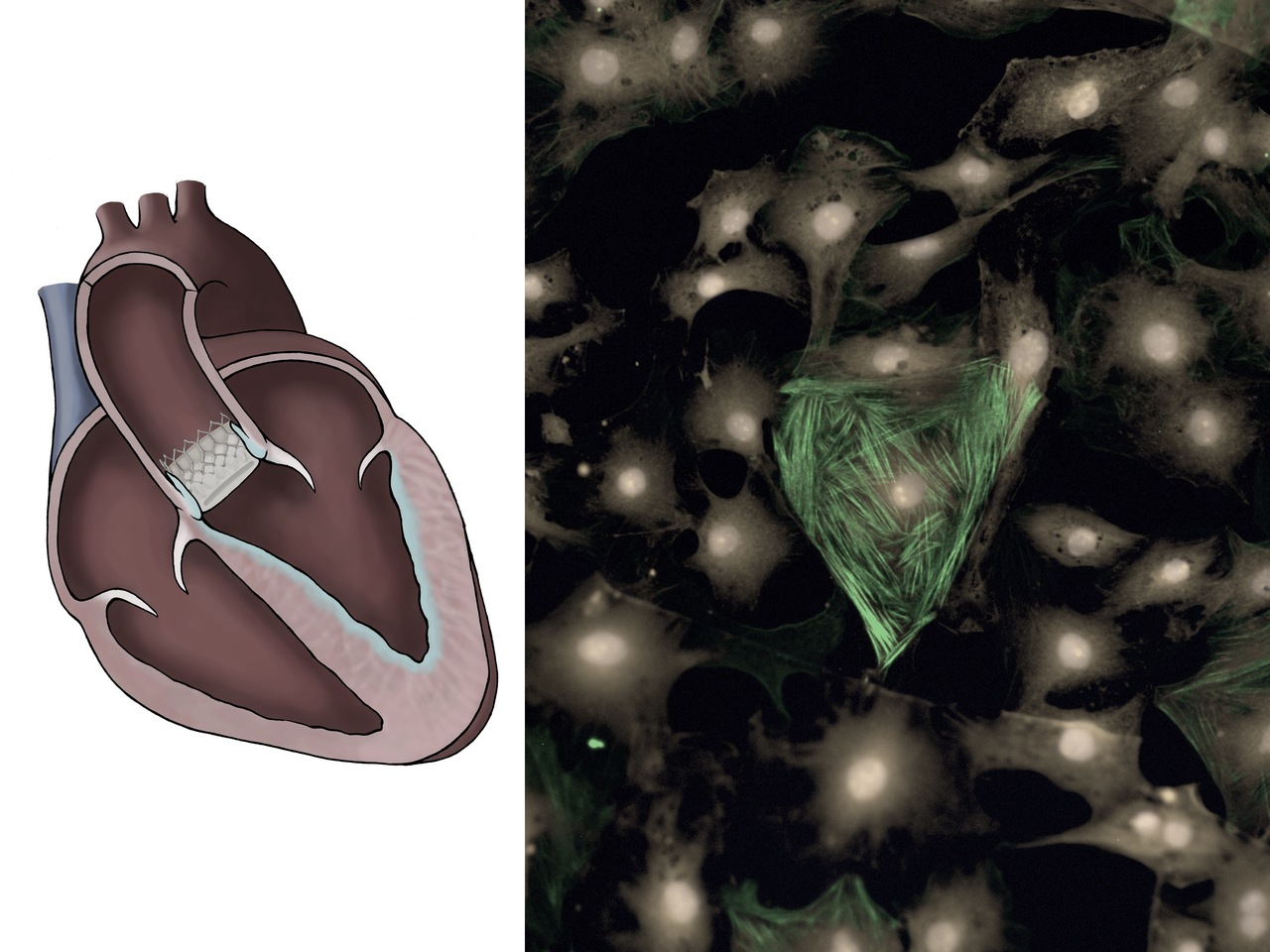