The agricultural sector is very excited about the possibilities that CRISPR-Cas genome editing offers. The technology provides the ability to insert, delete, stack, and rearrange genes or expression elements in an unprecedented manner to improve crops. To expand the repertoire of genome editing tools, we decided to pursue a completely different class of potential editor--the Type I CRISPR-Cas system. Unlike previous CRISPR-Cas systems adopted for genome editing, Cas9 and Cas12, Type Is are multi-component. Altogether, 4-5 proteins (depending on the Type I system) form a complex, termed Cascade (CRISPR-associated complex for antiviral defense), that is involved in RNA guide maturation and DNA target homing. Then a separate endonuclease protein, Cas3, is recruited for target DNA cleavage. Interestingly, these multi-component systems have been shown to be very efficient in prokaryotes for viral defense and are in fact the most abundant and diverse CRISPR systems. This suggests that they are extremely successful in protecting microbial cells from invading DNA. One other distinct difference compared to Cas9 and Cas12 is the length of the target sequence. The DNA target is 30 bp or greater compared to ~19-23. A bigger target site could potentially mean many fewer off-target sequences being cut. These properties made it an attractive tool for use in plants.

The big question was--would it work? People were skeptical because of its complexity and, from a molecular tools perspective, would require five genes to be expressed and even more assembled into a complex with its guide RNA in the nucleus. Initial testing and optimization was daunting until we devised an easy and simple readout to demonstrate functional complex formation. For this, we adapted a fluorescent transactivation system developed by our colleagues. By attaching a plant transcriptional activator (CBF1) to Cascade proteins and co-introducing them into corn embryos, we could test for Type I expression, complex assembly, and DNA target recognition by visualizing fluorescent protein expression. Our first construct, attaching CBF1 to the C-terminus of CasD, yielded a hint of transcriptional activation. Spencer and I both performed the initial experiment; and, only after much squinting through the scope and lengthening the CCD camera exposure to several seconds, we concluded “It’s working!”. While that was an important first step, it was not very exciting from a gene expression standpoint. The issue could have been a matter of orientation or accessibility, so other fusions to CasA and CasE were made which showed improvement. At this point, we wanted a better and more objective measure of gene expression than “red, redder, reddest,” so we collaborated with our Immunochemistry group to develop direct protein quantitation on the OctetRED96. Becca, after a lot of work and focused effort, gave us nice linear quantitation that yet consistently showed single fusions to Cascade were still below similar experiments assembled with dCas9-CBF1. Next, we decided that doing a final comparison in the assay was worthwhile--try gene activation when 3 of the proteins in Cascade were tagged with CBF1. Amazingly, the results showed that Cascade provides stronger gene activation than dCas9-CBF1. This result illustrates that Cascade can function as a robust platform for the recruitment of multiple protein domains to a target DNA--a potential "Swiss Army" knife for plant genome targeting.

As a final test of its utility in plants, we needed to target a chromosomal gene with all its associated compaction by chromatin. Again, a quick and nice visual assay would be optimal and was provided by observations made by Barbara McClintock and others showing that a pair of genes, c1 and r, can modulate corn embryo coloration by activating the bronze 1 gene resulting in the production of anthocyanin. Using this system, we targeted the r promoter with dCas9 and Cascade while co-bombarding a c1 over-expression cassette. The resulting anthocyanin activation was produced at approximately equivalent levels to Cas9 providing further proof that Cascade was a viable new CRISPR tool for plants.

Recently, a couple groups have also published on Cascade utility in human cells. The Charles Gersbach group at Duke demonstrated IL1RN gene activation in HEK293T1, and Dolan et al. demonstrated that including the Cas3 endonuclease with Cascade leads to large variable-sized chromosome deletions in human embryonic stem cells and HAP1 cells2. Work from these groups along with our plant experiments support the notion that Type I Cascade may be repurposed for use as a gene targeting tool in complex eukaryotic cells. 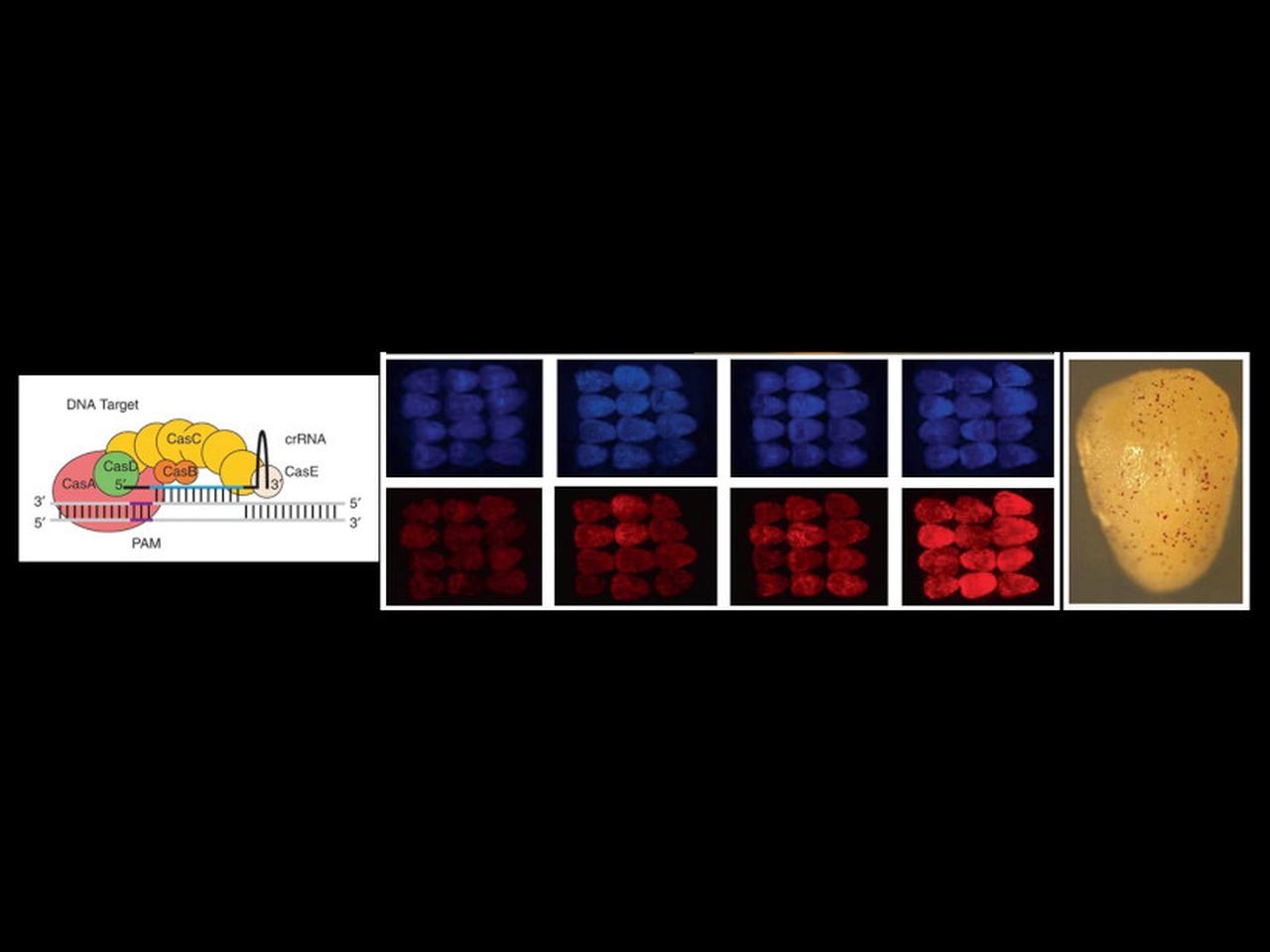 By developing new visual assays and modifying then delivering the multi-protein Cascade complex and crRNA into corn embryos, we demonstrate a new CRISPR tool's utility for gene activation in plants.