Voltage-gated ion channels are defined by their ability to sense voltage, specifically changes in membrane potential, and respond to these changes via a voltage sensing domain (VSD) that contains the positively charged segment 4 (S4) (Figure 1).  S4 movement is communicated to the pore, resulting in pore opening, in the case of voltage-gated potassium (Kv) channels responding to membrane depolarization, for instance. 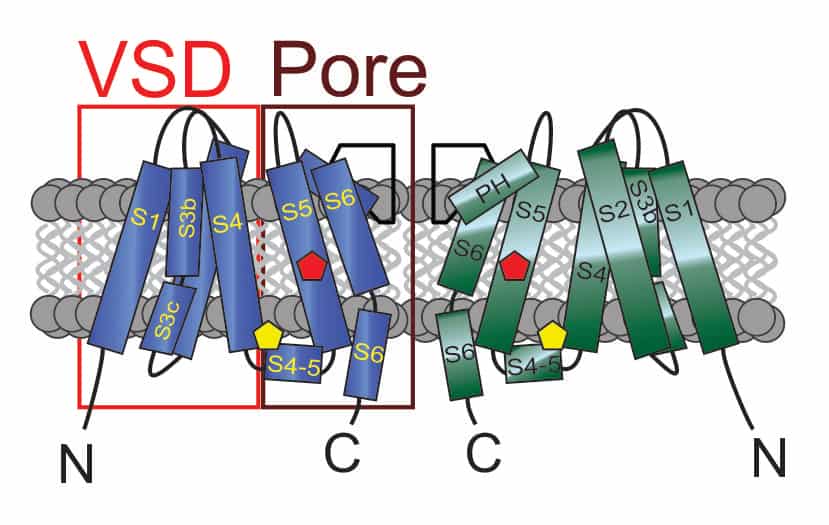 In contrast, ligand-gated ion channels are those that are opened by binding of a chemical ligand, which results in a conformational change that opens the pore.  Classical examples are the canonical GABAA receptors that are responsible for much of the inhibitory neurotransmission occurring in the central nervous system.

As very often occurs in biology, however, the situation is not so clear-cut as would first appear. It has long been known, for example, that many Kv channels require binding of phosphatidylinositol 4,5-bisphosphate (PIP2) for optimal activation. Without binding of PIP2, a lipid-derived signaling molecule, Kv channels - including those in the KCNQ subfamily – find it difficult to open. This “ligand-gating” property of neuronal KCNQ Kv channels is exploited by the nervous system to regulate neuronal excitability.

Perhaps more surprisingly, we discovered in 2018 that a binding pocket in neuronal KCNQ channels long known to accommodate the synthetic anticonvulsant, retigabine (Figure 2), also accommodates the primary inhibitory neurotransmitter, GABA and related metabolites, and the structurally related drug, gabapentin.  With sub-micromolar binding affinities higher than those boasted by many of the classical GABAA receptors, KCNQ3 and KCNQ5 hold GABA tightly and when this occurs, can open at much more hyperpolarized potentials than in its absence. Thus, the line between voltage-gated and classic ligand-gated ion channels becomes ever more blurred. 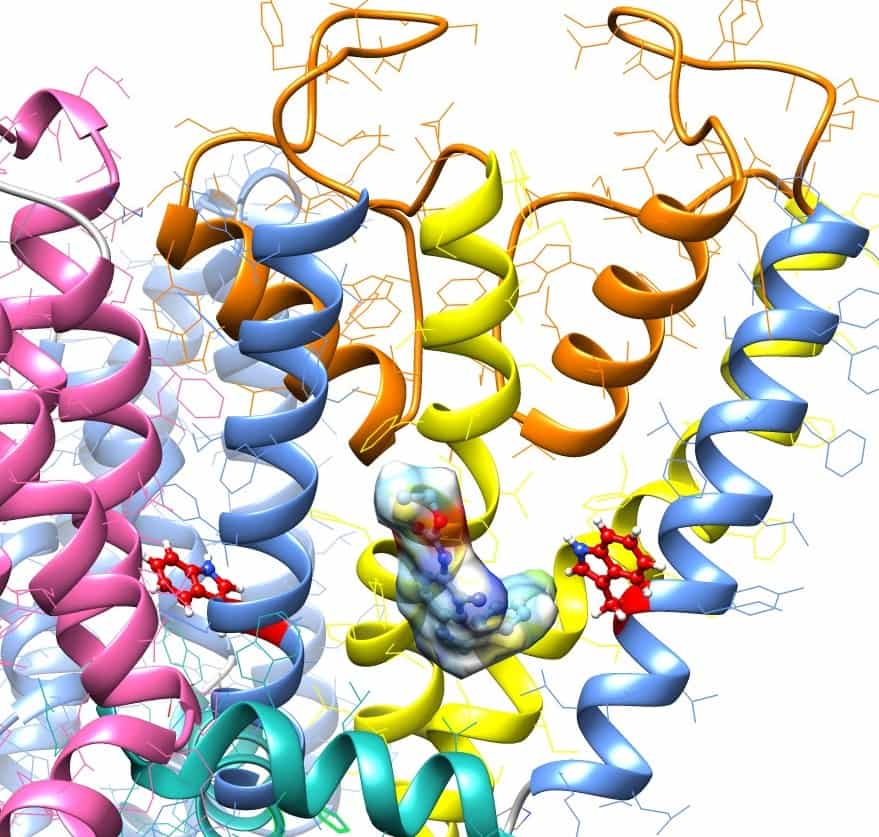 The obvious temptation following the finding that GABA can activate KCNQs was to pursue other neurotransmitters, which we did. Fortunately, we found that the excitatory neurotransmitter, glutamate, which is structurally highly similar to GABA, does not bind to or activate KCNQs (this makes sense as KCNQ activation is inhibitory to excitability, because it hyperpolarizes the cell membrane).  Additionally, however, neither did the inhibitory neurotransmitter, glycine, bind or activate KCNQs. Unperturbed, we decided to force glycine to activate KCNQs by creating designer glycine-based ligands.  Using in silico re-engineering guided by the known chemical feature that facilitates retigabine activation of neuronal KCNQs – negative electrostatic surface potential centered around a carbonyl group within a compound small enough to fit into the retigabine/GABA binding pocket.

Using quite simple in silico approaches and no real-world chemical synthesis, we were able to predict that several simple glycine derivatives would activate KCNQs; the predictions were borne out by electrophysiology studies facilitated by the fact that the predicted KCNQ activators were all readily and cheaply available from standard chemical supply companies. While we still do not fully understand the rules by which this occurs, specific compounds that we tested were highly KCNQ isoform-specific.  This property may point the way toward future development of more specific compounds to therapeutically target individual KCNQ isoforms.

Moving forward, we are hoping that other less conventional trajectories might lead to further advances in this area.  We have discovered that the heteromeric channel composition of the primary type of KCNQ channel in mammalian brain – the KCNQ2/KCNQ3 channel – can be exploited to improve drug efficacy by combining molecules that preferentially activate KCNQ2 channels with those that prefer KCNQ3. We also recently found that a variety of compounds isolated from plants, for instance E-2-dodecenal, a fatty aldehyde present in cilantro or coriander (Coriandrum sativum) (Figure 3), sit in a similar KCNQ2/3 binding pocket to that occupied by GABA and the new glycine derivatives. This in some cases explains the therapeutic action of specific medicinal plants (cilantro has long been used as a folk anticonvulsant) and we also provided evidence that plant-derived compounds can synergize with synthetic compounds to produce unprecedented shifts in KCNQ channel voltage dependence.

The properties we uncovered in novel glycine derivatives and also the ability of these and some other synthetic and plant-derived chemicals to synergize in heteromeric channel complexes may help to avoid side effects of the type that have contributed to retigabine being removed from the clinic and that have hampered development of safe and effective retigabine derivatives for clinical use.  Such advances are sorely needed to treat disorders including epileptic encephalopathies, debilitating and often lethal childhood diseases that arise from de novo mutations in neuronal KCNQ genes. In addition, activation of vascular and neuronal KCNQ5 channels by compounds derived from plants may one day be used to treat hypertension or KCNQ5-linked encephalopathy. 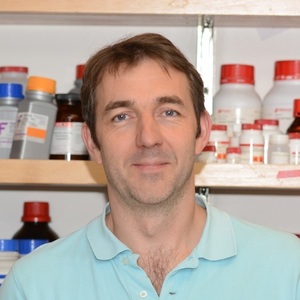