Whether it is the human genome, or that of any insect, plant, fungi or bacterium, we know very little about what most genetic components in a genome do. Ten years ago, to help us overcome this challenge, we designed transposon insertion sequencing (Tn-Seq), enabling pooled phenotypic screening of all genetic components in a bacterial genome. While Tn-Seq is powerful, it has difficulty entangling more complex phenotypes. By integrating Tn-Seq with microfluidics, we designed droplet Tn-Seq (dTn-Seq), which retains Tn-Seq’s high-throughput nature but enables the analyses of complex single-cell phenotypes, as well as interactions between bacteria and host-cells.

For many decades, a common approach to uncover a gene’s function, has been to ‘break’ a gene (e.g. by knocking it out) and see what happens to the organism. To speed-up such experiments, ordered arrays were developed for organisms such as yeast and Escherichia coli, where almost every gene in the genome is knocked out and separately stored in many 96 or 384-well plates, making them amiable to robotic screening. To make such screens even easier, and enable them in many more strains and species, we initially developed Tn-Seq for bacterial genomes, which was extended by others into human cells and yeast.

In Tn-Seq, transposon (Tn) mutagenesis is used to create pools of hundreds of thousands of mutant cells each of which carries a Tn inserted somewhere in the genome, thereby disrupting the gene’s function. By subjecting such pools to a specific environment, followed by quantification of the flanking regions of each Tn before and after selection (by Illumina sequencing), a genetic component can be deemed important or essential based on the change in frequency of the Tn. This has led to uncovering new biology, including the discovery of non-coding RNAs as well as drug and vaccine targets, for hundreds of different bacterial strains and species.

With Tn-Seq, however, it remains hard to study phenotypes other than growth. Moreover, it is known that when cells reside in a mixed population they sometimes display different phenotypes than when grown in isolation. For instance, if bacteria harvest carbon from their environment by clipping them off of epithelial cells, then a bacterium that does not make the clipping-enzyme can leech of another that does. Because, once the secreted enzyme liberates sugar into the environment, the leecher can gobble up some of that tasty carbon as well. To uncover these and other complex single-cell phenotypes we would have to study each mutant in isolation, affecting the high-throughput nature of Tn-Seq.

dTn-Seq solves this challenge by rapidly encapsulating millions of cells from a pooled library, each into their own 65um sized growth-medium-in-oil droplet, while retaining the high-throughput pooled sequencing analyses of Tn-Seq. By varying the environment within the droplets, different selection conditions can be used to uncover the involvement of all genetic components in a certain phenotype, including the sugary example above, the scavenging of metals, or interactions with host-immune factors. Additionally, by creating solid agarose or hydrogel-droplets, FACS sorting is enabled and microcolony formation, interbacterial communication and bacteria-host cell interactions can be studied.

dTn-Seq is thereby a great addition to our genomics toolbox to help uncover complex phenotypes. However, there remains a need for other tools, such as those that can rapidly map out genome-wide genetic interactions across different strains and species. While we are working to reach that goal, we are excited to see the scientific community explore and further expand the applicability of dTn-Seq. 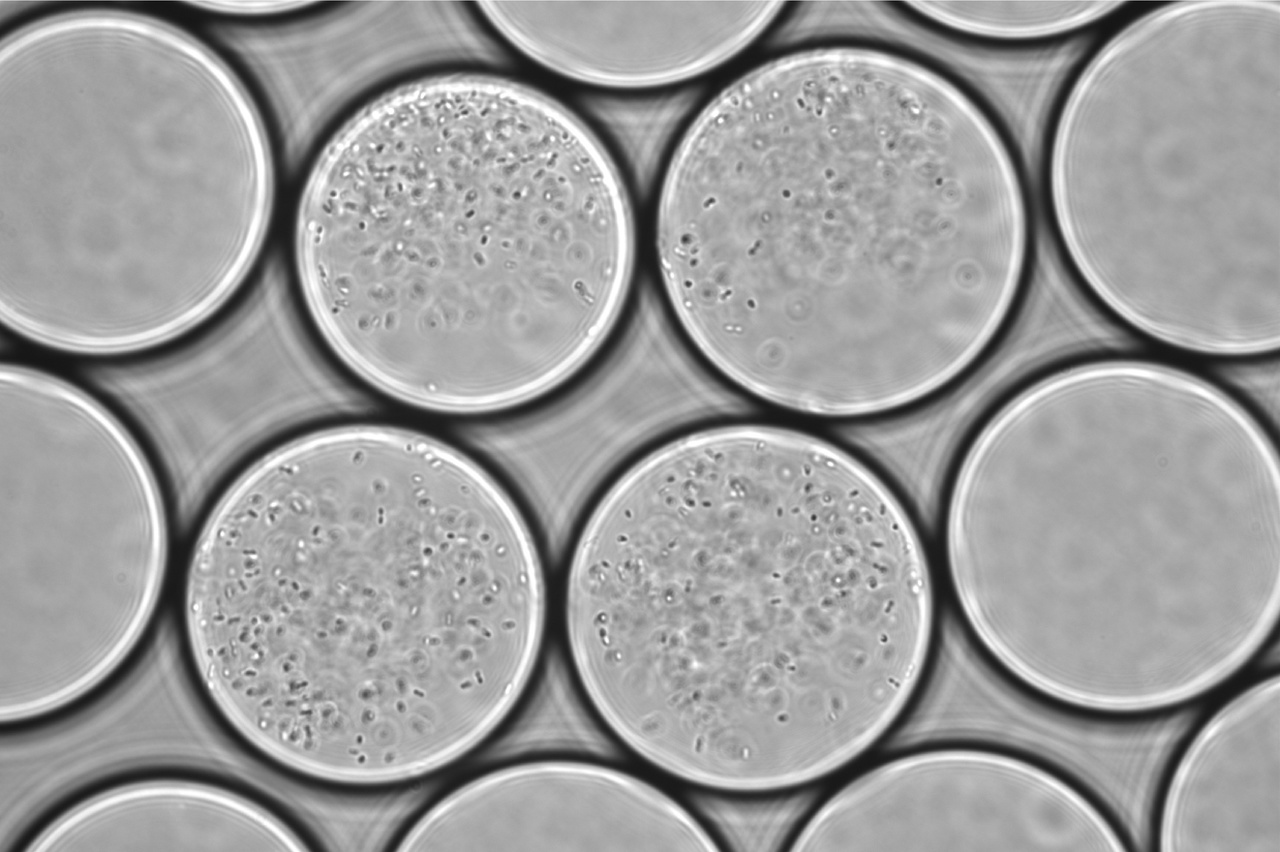