A yeast species used to produce proteins and chemicals is engineered to grow solely on the greenhouse gas CO2.

The development of carbon neutral processes that do not compete with resources used in the food and feed industry is a key task on the way to a sustainable bio-economy. Making use of CO2 as a carbon source in biotechnology is either done by autotrophs or by engineered host organisms with an altered lifestyle. Changing the trophy from hetero – to autotroph in production strains requires fundamental changes to the metabolism, and allows to use CO2 as a carbon source. Efficient genetic tools are available for the most prominent production hosts (e.g. Saccharomyces cerevisiae, Pichia pastoris and Escherichia coli), which enables the integration of entire heterologous pathways. In P. pastoris, we have now used these novel techniques for the integration of a CO2 fixation pathway, resulting in a eukaryote with a synthetic autotrophic lifestyle. We made use of its native methylotrophic lifestyle, in which P. pastoris uses the C1 substrate methanol as its sole carbon source using a peroxisomally compartmentalized pathway resembling the Calvin-Benson-Bassham (CBB) cycle. Likewise, CO2 fixation via the CBB cycle in plants and various autotrophic organisms is localized to chloroplasts. The genetic operations for turning the yeast peroxisome into a CO2 fixation compartment were performed by using CRISPR/Cas9. In the resulting strains, methanol is used as an energy source for the generation of reduction equivalents and ATP, while its assimilation is entirely blocked.

The engineered P. pastoris strains grow in the presence of CO2 and methanol, while the respective control strains cannot. Further, we could show that all carbon for biomass generation is derived from CO2. Following a reverse 13C labeling approach we directly measured CO2 incorporation into biomass and into cellular metabolites. By performing adaptive laboratory evolution, we could double the growth rate on CO2 as carbon source. We then sequenced the genomes of the evolved strains and revealed which mutations lead to enhanced growth. These mutations were found in genes either directly involved in a phosphorylation step of the CBB cycle representing a branching point to other biosynthetic routes, or in a gene which might play a role in energy balancing of the cell. The system described in this study proofs the concept of synthetic autotrophy in yeast. Behind the paper is a team of scientists led by Prof. Diethard Mattanovich that will now develop a platform technology for turning CO2 into value-added chemicals and cellular biomass based on the findings reported in the study. 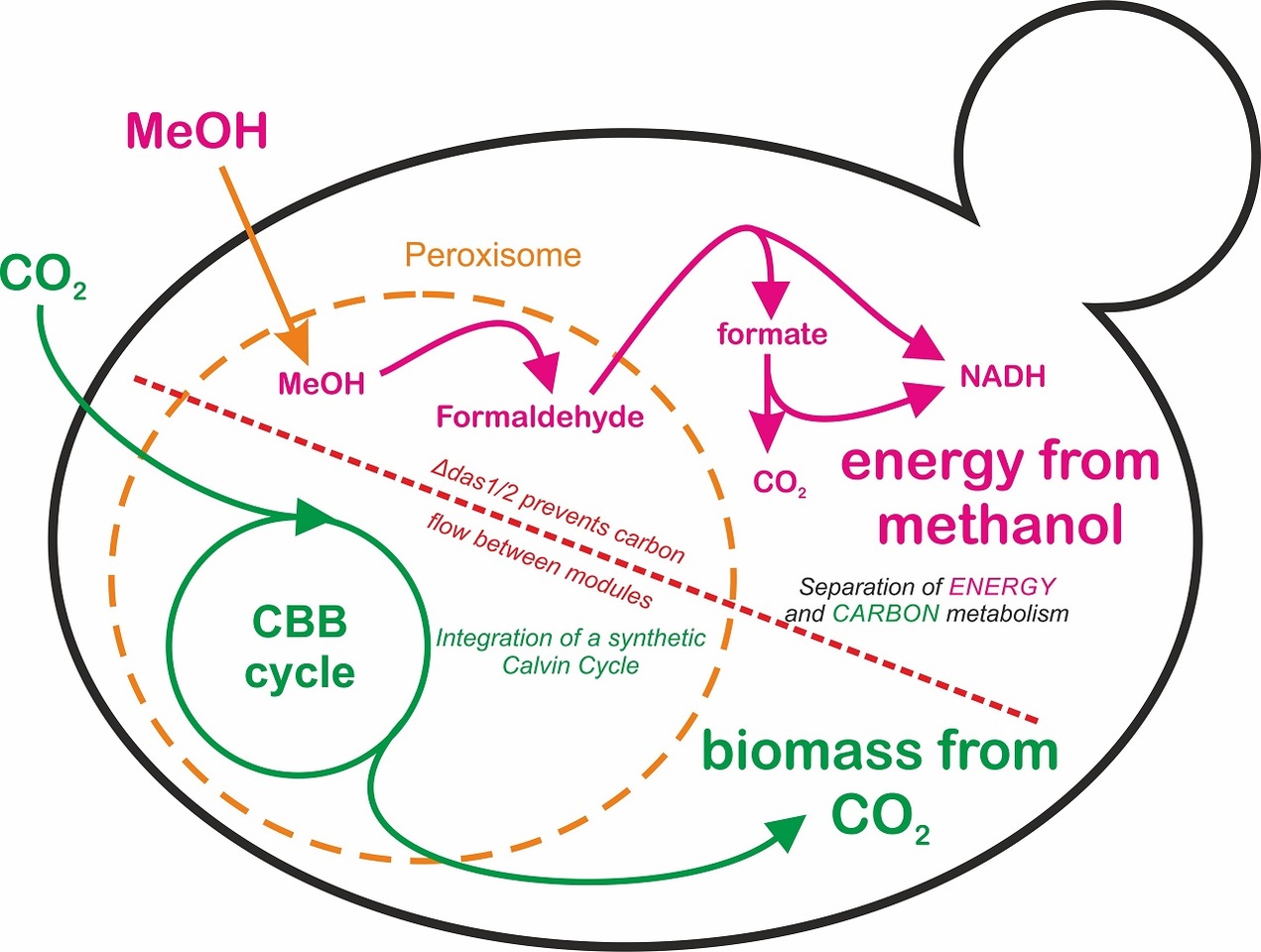 An industrially important yeast species was engineered to grow solely on the greenhouse gas CO2.