Imagine a futuristic technology allowing you to text your friends and compose emails using your thoughts alone. This technology exists today, in devices called brain computer interface (BCI) spellers. The moment I heard of BCI spellers, I was enthralled. They seemed like something from a science fiction novel, and I desperately wanted to have my own mind read by a computer. Therefore, being an enterprising young scientist, I pitched the idea to my supervisors, Professor Jason Mattingley and Dr David Painter, and we got to work.

David: “I’d read reddit posts on futurology and was excited by this project’s potential. I still imagine developing this into a global brain-based messaging platform!”

Figure 1: A BCI typist using the speller to type out “BCI IS THE FUTURE”. The monitor displays the flickering virtual keyboard.

Setting our sights high, we read the latest work by Chen et. al. (2015), who reported a new BCI speller with extremely fast typing speeds. Thanks to the authors’ well-written methods, we set about developing a BCI speller based on their design and algorithms. Our speller used electroencephalography(EEG) and worked by classifying the unique pattern of brain activity evoked when typists focus their attention on each of the flickering speller keys. With a little practice, I could use the speller with very high classification accuracy when cued to focus on different letters in turn. Unfortunately, the speller did not perform as well for Jason and David.

David: “But you were better than basically anybody else on the speller, I think your secret skill is to be a human photodiode!”

Alas, even with my secret skill, classification performance dropped for me as soon as I tried to spell words and phrases.

At this point, we went back to the literature. We found that many BCI spellers were tested by having trained users type out repetitive phrases, or simply cycle through the keyboard. These sorts of tests don’t take into account how difficult it is to freely communicate using the speller. We therefore designed a BCI speller that favoured usability over speed, and tested this speller’s performance for novice users. The engineering and computer science focus of this project was a novelty for our team. Whereas we usually design computer programs to investigate the brain, we now used the brain to investigate computer performance.

Video 1: The BCI speller in action

Overall, this was a highly rewarding experience, and stepping out of our comfort zone allowed us to bring a fresh perspective to an existing field. We hope that others will be inspired to take this project even further. One exciting application would be to combine this BCI speller with virtual reality. Virtual reality creates immersive simulated environments, in which people can move about, disconnected from traditional computer interface devices such as keyboards and mice. High performance BCI spelling algorithms could be paired with a limited number of EEG electrodes to allow people to interface with virtual worlds using only their thoughts. To allow for this and other possible applications, we’ve made our code and data available online, and we’re excited to see where this work ends up! 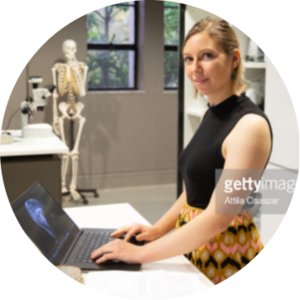 PhD Student, The University of Queensland