Could we expand the versatility of active genetics from eukaryotes to prokaryotes? “Very unlikely considering the haploid nature and the single copy of each gene in a prokaryote cell context”, we thought initially. But what about a bacterial strain harboring a plasmid with multiple copies of the target gene, where the gene drive could propagate and spread within a single cell? Definitely worth a try. We brought together the expertise of the Bier lab in CRISPR-based gene drives with the microbiology research focus of the Nizet Lab to establish proof-of-principle of the first bacterial gene-drive system, dubbed Pro(karyotic)-Active Genetics or “Pro-AG”.

Our main motivation has been to explore this revolutionary genetic platform as a weapon in the fight against antibiotic resistance, a critical public health problem that has been found in all regions of the world. Some estimates hold that if dramatic actions are not taken soon, antibiotic resistance could cause 10 million deaths each year by 2050, crippling modern medicine and triggering catastrophic economic damage. We contemplated if modifying a standard bacterial CRISPR editing system by incorporating an active self-copying mechanism could enhance efficiency in scrubbing antibiotic resistance in prokaryotes.

We designed an analogous CRISPR-based gene-drive system for the bacterium Escherichia coli that efficiently copies a gRNA cassette and any adjacent cargo that are flanked with sequences homologous to the targeted gRNA/Cas9 cleavage site. We observed that Pro-AG functionally inactivates an antibiotic resistance marker on a high copy number plasmid with ~100-fold greater efficiency than standard CRISPR-based methods, reflecting an amplifying positive feedback loop due to increasing gRNA dosage. In effect, each insertional editing event expands the pool of functional gRNA donor scaffolds with extended homology arms in their newly copied plasmid context, initiating a “chain reaction” accelerating further insertional events.  Remarkably, the high efficiencies achieved with Pro-AG copying system in bacteria are comparable to those attained by CRISPR-based gene-drive systems in diploid organisms.

Pro-AG can likewise effectively edit large plasmids, single-copy genomic targets or introduce functional cargo genes. We hope that multiple genome-engineering applications could ultimately benefit from incorporation of the Pro-AG platform, including elimination of bacterial virulence factors carried by diverse episomal elements and resistance determinants in commensal bacteria or prokaryotic pathogens, targeting antibiotic resistance genes from bacteria in the environment, livestock, inland fish farms, or sewage treatment ponds, reprogramming genetic circuits impacting bacterial physiology, or tailoring interactions among the microbiota in environmental or host niches. To take Pro-AG to the next level for these biomedical and/or biotechnological applications, it will be necessary to couple Pro-Ag to efficient delivery systems such as phage vectors or conjugation mechanisms for spread throughout bacterial populations. 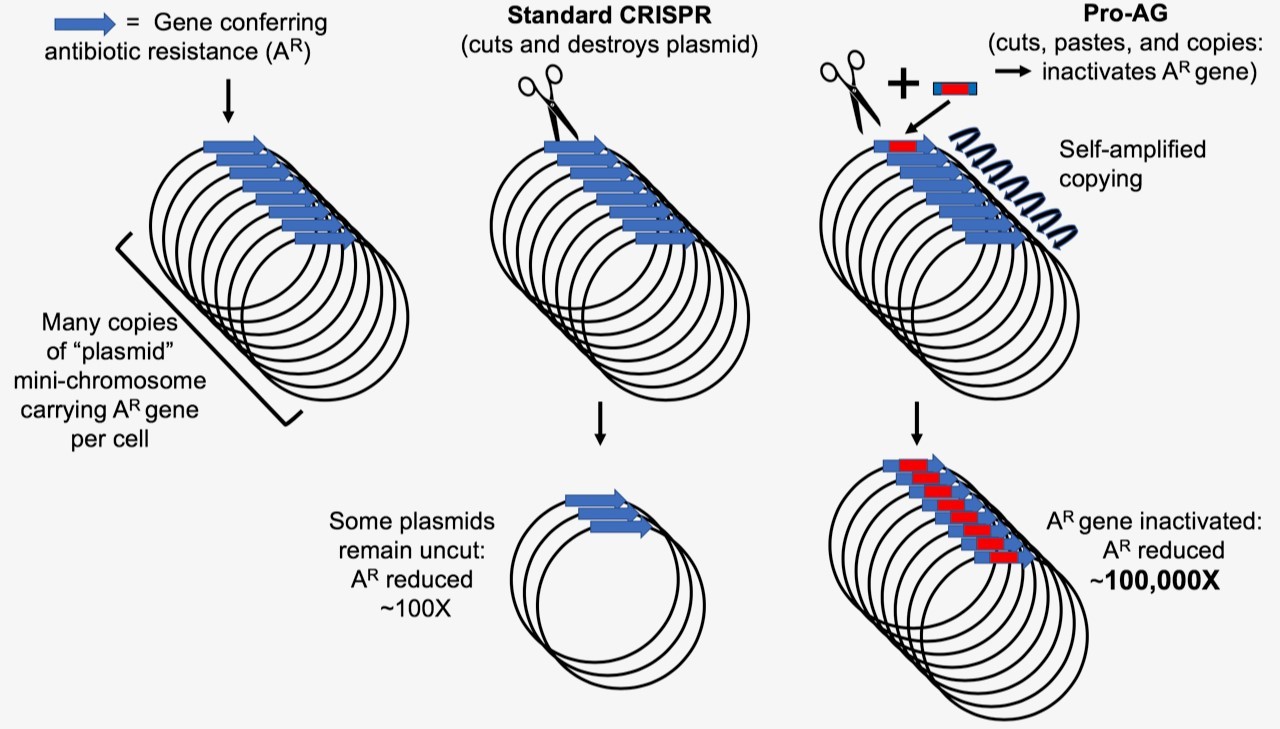 CRISPR-based gene drive systems were originally developed in Drosophila by Valentino Gantz and Ethan Bier at UC San Diego. Dubbed “active genetics”, their use expanded to other diploid organisms, from yeast to mammals. Could we translate active genetics from eukaryotes to prokaryotes?