A system employing liquid-handling robotics and an integrated mobile microscope enables the automated culture, sample collection and in situ microscopy imaging of up to ten fluidically coupled organ chips within a standard tissue-culture incubator.

Numerous organ-on-a-chip (Organ Chip) microfluidic culture devices have been developed to mimic human physiology and disease states, with the goal of using them to one day replace animal testing, accelerate drug development, and increase the likelihood of success in the clinic.  Most work in this field has focused on developing individual Organ Chips and demonstrating that they recapitulate specific organ functionalities.  But in 2012, the Defense Advanced Research Projects Agency (DARPA) requested proposals to meet what appeared to be an impossible challenge that could define the future of the field. The goal was to develop multiple human Organ Chips representing each of the physiological systems (e.g., circulatory, respiratory, musculosketal, etc.), and an automated instrument that would fluidically link up to 10 different chips and maintain their viability and function, to create what effectively would be a human ‘Body-on-Chips’.  In addition, the investigators would then have to demonstrate that this multi-Organ Chip system can be used to predict human drug pharmacokinetic and pharmacodynamic (PK/PD) parameters by administering drugs into the Body-on-Chips, measuring drug levels on-chips, and applying physiologically-based PK/PD computational modeling.  This is a clinically important challenge because PK/PD analyses carried out in animals are often not predictive of human results, and in vitro PK/PD modeling does not produce quantitative PK parameters.  In addition, being able to accurately predict human drug PK in vitro could shorten clinical trials by enabling selection of the most appropriate drug administration regimen before it is ever administered to a patient.  My team was a recipient of one of these DARPA Multiphysiological System grants, and in 2 back-to-back articles in the current issue of Nature Biomedical Engineering, we describe how we successfully met the DARPA goals.

In the first article by Novak et al., we describe the engineering of an automated “Interrogator” instrument that can simultaneously culture up to 10 different 2-channel Organ Chips, each of which contains a vascular channel lined by human endothelium interfaced across a porous membrane with organ-specific tissue cells within a parallel parenchymal channel.  One novel feature of the Interrogator is that it uses a robotic liquid handling device to transfer a common ‘blood substitute’ medium drop-by-drop between the vascular channels of different Organ Chips, rather than connecting them directly via continuous flow by tubing. This innovation circumvents multiple problems associated with direct fluid coupling (e.g., large dead volumes, difficulties in collecting samples to measure drug levels and assess tissue function without compromising fluidic coupling), in addition to providing a fully reconfigurable system in which Organ Chip linking order can be changed on demand.  The Interrogator also incorporates an automated microscope so that cells growing within chips can be visualized without removing them from the culture instrument. The Interrogator maintained the viability and functions of 8 Organ Chips (intestine, liver, kidney, heart, lung, skin, blood–brain barrier and brain) for 3 weeks, and a computational multi-compartmental model was developed that quantitatively predicted the distribution of a chemical tracer (inulin) perfused through all of the organs of the Human-Body-on-Chips.

In the 2nd manuscript by Herland et al., the Interrogator was used to create a first-pass PK model by fluidically coupling Gut, Liver, and Kidney Chips and integrating an Arterio-Venous Reservoir (AV-Reservoir) to mimic blood mixing in the circulation and provide a way to take samples of drug levels within the system that would be analogous to venous blood sampling. When nicotine was introduced into the intestinal lumen of the Gut Chip to mimic oral administration, we were able to detect its absorption, as well as its metabolism by the Liver Chip, and excretion by the Kidney Chip.  More importantly, using computationally scaled data from these fluidically linked Organ Chips, we were able to predict nicotine PK parameters (e.g., t1/2, Cmax) that quantitatively matched those previously measured in human clinical studies. In addition, by carrying out similar studies with the cancer drug cisplatin perfused through the vascular channel to mimic intravenous injection in a Body-on-Chips composed of linked Bone Marrow, Liver, and Kidney Chips along with an AV Reservoir, we were similarly able to quantitatively predict cisplatin PK and PD parameters that again matched published results previously observed in human patients.

It is important to note that we used Organ Chips composed of poly-dimethylsiloxane (PDMS) in these Body-on-Chips studies. Thus, while many in the field assume that PDMS devices can not be used for quantitative drug studies due to potential absorption problems, we show that it is indeed possible to accomplish this by quantifying drug levels in all compartments and taking losses into account using computational modeling (e.g., much as is done with drug losses into fatty tissues in human PK/PD modeling).

Finally, in a 3rd related article in the same issue of Nature Biomedical Engineering, we describe the ability of one of our microfluidic Organ Chips – a human Bone Marrow Chip – to faithfully recapitulate human marrow toxicity responses to clinically relevant drug exposure profiles of the cancer drug 5-fluoruracil and a second cancer drug (an aurora kinase inhibitor) that is currently in active clinical trials, as well as to gamma-radiation. Furthermore, when Bone Marrow Chips were created with CD34+ hematopoietic cells isolated from the blood of children with a rare genetic disorder (Shwachman Diamond Syndrome), we were able to recapitulate this disease phenotype, which opens the possibility of using this approach to help design clinical trials for conditions where patient numbers are extremely low. Together, these studies demonstrate the power of Organ Chips, both alone and when linked in a Body-on-Chips configuration, to produce information relevant to drug development and clinical trials design that is not possible today with animal models or when patients have rare genetic disorders.

Donald E. Ingber,MD,PhD
over 2 years ago 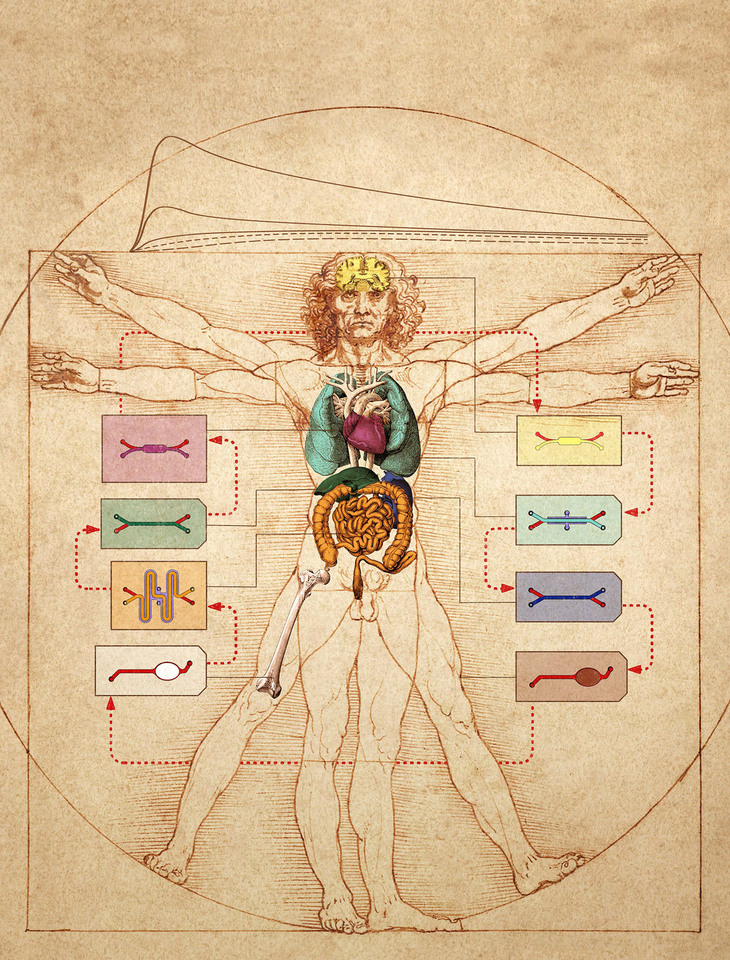