The Leeper Lab ‘s goal is to develop innovative new therapies which will reduce the worldwide burden of atherosclerotic vascular disease. Our work is conducted in an interdisciplinary fashion, and spans the spectrum of ‘bench-to-bedside’ translation.
Anne V. Eberhard
Student of Medicine, Technical University of Munich/Stanford University
Follow
Like

Developing ways to safely and effectively restore efferocytosis is now the major focus on the lab. Efferocytosis (Latin: to carry the dead to the grave) refers to the removal of diseased and dying cells, such as those in the atherosclerotic plaque. First, we started a series of studies using systemic, pro-phagocytic antibody-based therapies. We have found that efferocytosis-regulating molecules (known as ‘eat-me’ and ‘don’t-eat-me’ ligands) are dysregulated in subjects prone to CAD and can be targeted by antibodies for therapeutic purposes (Nature, 2016). The idea was that CD47 functions as a ‘don’t eat me’ signal and anti-CD47 antibodies might reestablish phagocytic activity. We have proven that CD47 blocking antibodies can restore ‘eat me’ signaling and cause macrophages to clear diseased cells within the necrotic core. This potent pro-efferocytic therapy leads to striking improvements in atherosclerosis burden, but comes at a cost of off-target clearance of some healthy tissues. Most concerningly, these therapies cause significant anemia (due to removal of healthy red blood cells) which will likely represent a major barrier to this therapy from being translated for use in heart disease patients.

To overcome these issues, we have partnered with leading experts in nanoparticle engineering (Dr. Bryan Smith) and immunology (Dr. Irving Weissman) to develop an exciting ‘Trojan Horse’ therapy which specifically homes to the diseased macrophage (based on technology originally published in Nature Nanotechnology, 2014). Using a scaffold of single-walled carbon nanotubes (SWNTs), we loaded this delivery platform with a chemical inhibitor of the anti-phagocytic CD47-SIRPa signaling axis. As detailed in the current manuscript (Nature Nanotechnology, 2020), we found that this ‘precision’ therapy could carry our proefferocytic therapies specifically to the plaque, and locally reactivate lesional phagocytosis, thus reducing plaque burden in atheroprone apoE-/- mice. Most importantly, these benefits were observed without inducing any off-target toxicity. Our data suggests that this approach could be safe and effective, thereby enabling future translational steps for this drug application.

The second major focus of the lab is in the genetics of cardiovascular disease. The lab uses a variety of ‘unbiased’ genomic and bioinformatic approaches to define the root cause(s) of atherosclerosis, which we then pursue with classical molecular and vascular biology approaches. Alyssa Flores’, one of the first authors on the current manuscript, interest in the genetics of cardiovascular disease caused her to pause her clinical training and come to Stanford for advanced ‘omics training. She is a medical student at Dartmouth's Geisel School of Medicine and a Howard Hughes Medical Institute (HHMI) Research fellow and was also responsible for the single cell RNA data collection and analysis in this study.

Single cell RNA sequencing is currently one of the most advanced techniques to analyze cell gene profiles and allowed us to detect changes in the subpopulations of cells that were activated by the SWNT therapy. Our Single-cell RNA sequencing analysis revealed that pro-phagocytic SWNTs decrease the expression of inflammatory genes linked to cytokine and chemokine pathways in lesional macrophages – implicating pro-efferocytic therapies in resolving the inflammation known to potentiate cardiovascular disease.

We are now prepared to generate the critical in vivo proof-of-principle data which will allow us to move into IND-enabling pharmacology/toxicology studies and – hopefully - first-in-man clinical trials. If successful, we aim to complete the final high-risk/high-reward studies which are necessary for us to translate this innovative technology out of academia and into patients suffering from the world’s leading killer.

Anne V. Eberhard
Student of Medicine, Technical University of Munich/Stanford University
Follow
I am a medical student and currently doing research for my doctoral thesis at Stanford. My passion lies in human genomics, digital health and precision medicine, but also in the economical & political dimensions of healthcare. 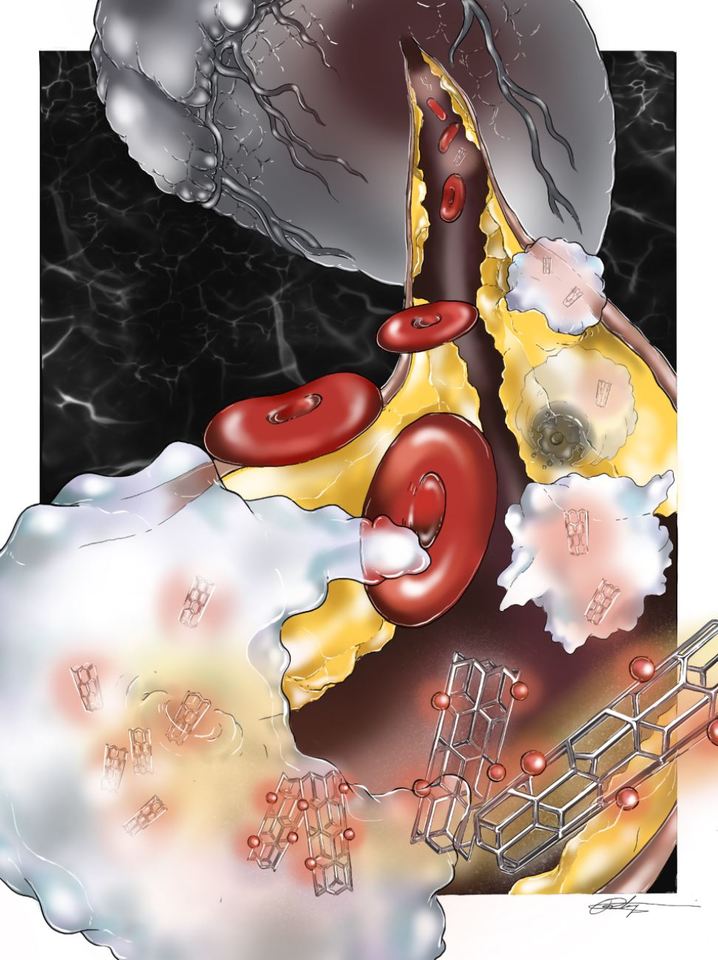 The Leeper Lab ‘s goal is to develop innovative new therapies which will reduce the worldwide burden of atherosclerotic vascular disease. Our work is conducted in an interdisciplinary fashion, and spans the spectrum of ‘bench-to-bedside’ translation.