Shelf-stable bioreactors for the production of pharmaceuticals and other high value chemical products
Alshakim Nelson
Assistant Professor, University of Washington
Follow
Like Be the first to like this
0

Large scale suspension fermentation technology is not easily portable or reusable. Here the authors describe a hydrogel system suitable for long-term and reusable production with both single and multi-organism consortia.

Cellular biocatalysis is the process of using cells and their machinery to manufacture drugs, vitamins, perfumes, fuels, and other chemical compounds. This process is the life-blood of the industrial biotechnology industry and is well-practiced in both academic laboratories and industrial settings around the world for the production of value-added chemicals, peptides, proteins, or antibodies of interest. In a typical process cells (yeast, bacteria, algae, or even some mammalian cell lines) are added to a large reactor with the nutrients required for production. The field of synthetic biology can further enable the molecular production to be distributed across multiple organisms in order to produce increasingly sophisticated chemical products while reducing the metabolic load on a single microbial species. However, multi-organism consortia (comprised of two or more cellular species) are a challenge to maintain in liquid culture due to competition between species for nutrients and space. Moreover, these types of bioreactors are not easily portable, reusable, or suitable for on-demand production.

Cell-immobilized bioreactors, wherein the active cells are trapped within a surrounding matrix, offer several advantages over batch liquid culture reactors, such as minimal down time, simplified purification, and improved temperature regulation. In our Nature Communications publication, we demonstrated that a microbe-laden hydrogel platform that can compartmentalize and spatially organize individual microbial populations and consortium members into hydrogel constructs for cellular biocatalysis. The microbe-laden hydrogels can be 3D printed to afford robust hydrogel constructs that maintain the viability and metabolic activity of the embedded cells for extended periods of time. Interestingly, this approach enables repeated re-use and preservation (via refrigeration or lyophilization), thus enabling on-demand production of these molecules in a manner that is unmatched by traditional liquid-based culturing. The ability to enable long-term stability of cells and consortia (at least 1 year in the continuous fermentation of yeast to produce ethanol and at least 3 months in the case lyophilized gel storage and subsequent use for betaxanthins) provides a niche for preserving catalytic function in industrial bioprocesses. One highlight of this approach is that the relative cell populations of the different organisms can be controlled by changing the amount of hydrogel ink printed, which provides a newfound capacity for plug-and-play synthetic consortia. Such control is not possible in a liquid culture.

We expect these developments to afford new technologies for on-demand production of small molecule and peptide products in the future. This technology will be especially applicable in remote or isolated areas where space and resources are limited, which could include manned space missions or personalized medications in the future.

Submitted by Alshakim Nelson on behalf of the co-authors. 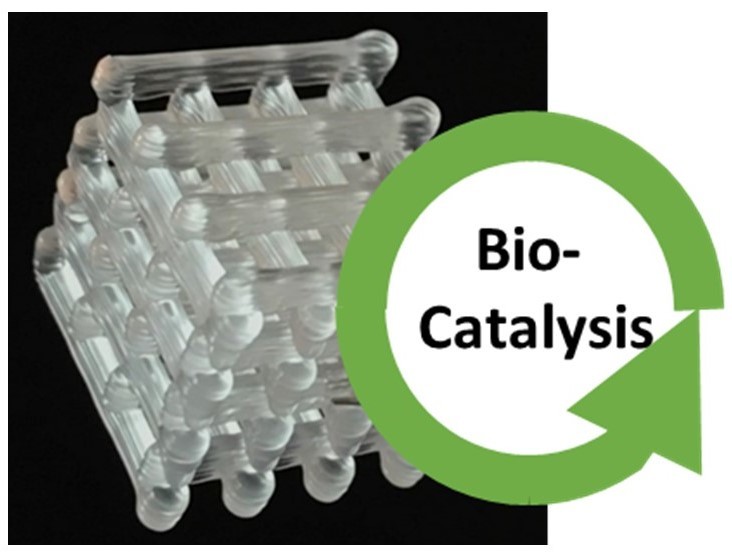