In a recent paper in Nature Nanotechnology, we show an amphiphilic photochromic molecule located in the plasma membrane that leads to photostimulation via a pure membrane perturbation by azobenzene photo-isomerization, without involving covalent interactions or modifications of ion channels.
Mattia Lorenzo DiFrancesco
Post-doc, IIT-NSYN, Center for Synaptic Neuroscience and Technology, Italian Institute of Technology
Follow
Like Be the first to like this
0

Light-sensitive azobenzene compounds can be engineered to stably partition into the plasma membrane, thus causing its thinning in the dark and relaxation upon light stimulation. In neurons, the resulting light-dependent change in membrane capacitance induces a transient hyperpolarization followed by…

The adage “form fits function” is a praise to structural biology that suggests a dynamic role of molecular machines able to change their shape under a stimulus. Retinal, the chromophore in photoreceptors, is a good example of this at the tiniest dimension. The cis to trans photo-isomerization triggers a long cascading of processes leading to optic nerve stimulation. In an attempt to mimic nature, artificial photochromic molecules have been extensively investigated as photo-switches in a variety of situations. These approaches, while interesting and sometimes effective, typically rely on the modification of functional components of the membrane (e.g. ion channels) consequent to the isomerization, but do not depend directly on the mechanical effect.

Ziapin2, a new photoswitchable molecule, contains hydrophobic and hydrophilic components bonded on opposite sides of the azobenzene. Affinity driven interactions lead to the localization of the hydrophobic tail in the cell membrane, while keeping the hydrophilic heads exposed at the membrane surface. We demonstrated that two interlocking molecules, in the elongated (trans) configuration, form a dimer within the membrane that shrink the membrane and locally decrease its thickness. This results in an increase in electrical capacitance (the ability to store charges) that can be measured. Upon illumination, the trans-cis isomerization of azobenzene withdraws the hydrophobic anchors and breaks the dimer. This relaxes the plasma membrane towards its native thickness, thus reducing capacitance. Thus, the light-dependent dimer assemble disassemble activity on membrane thickness makes the membrane oscillate from a high (dark) to a low (light) capacitance state.

Capacitance plays a key role in excitable cells, such as neurons or muscle cells, in regulating excitability by affecting the dynamics of membrane potential changes. In the dark, the tonic high capacitance state of the membrane makes the neuron less prone to change its potential, thereby decreasing intrinsic excitability. Upon light stimulation, the phasic capacitance drop releases negative charges inside the cell producing a hyperpolarization wave followed by a fast transient to rebound depolarization that opens active conductances and triggers firing of action potentials.

The molecule we describe is a sort of "Janus" nanomachine that keeps neurons constrained to the resting state under the dark, and unleashes their firing activity under the command of light. 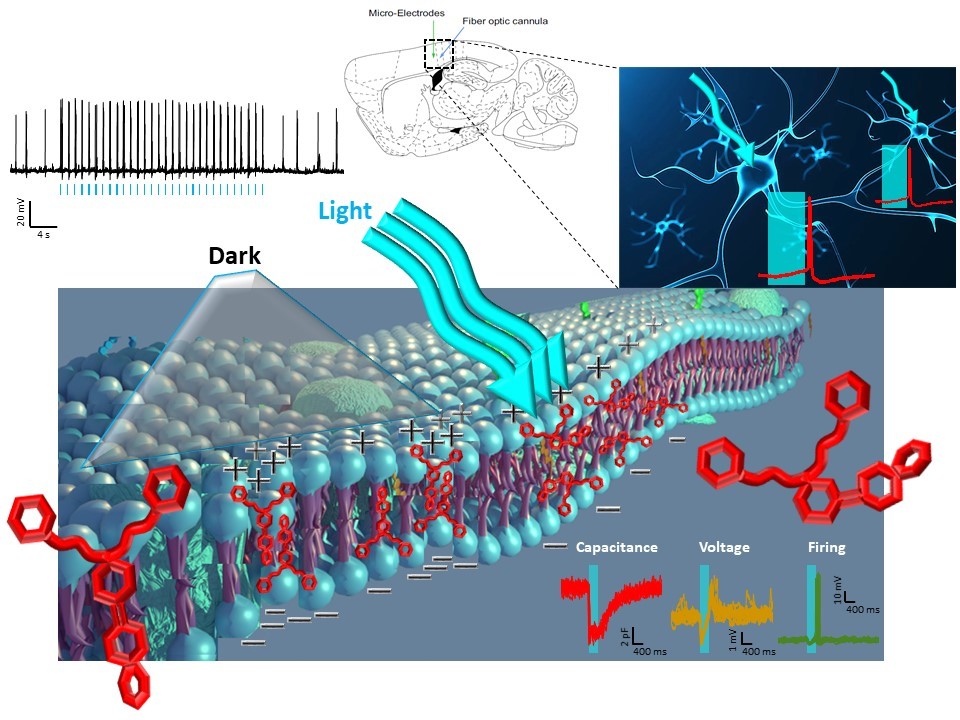 In a recent paper in Nature Nanotechnology, we show an amphiphilic photochromic molecule located in the plasma membrane that leads to photostimulation via a pure membrane perturbation by azobenzene photo-isomerization, without involving covalent interactions or modifications of ion channels.