A narrative describing our journey to developing a new differentiation protocol that works across multiple stem cell lines
Jeffrey R. Millman
Assistant Professor, Washington University School of Medicine
Follow
Like Be the first to like this
0

Generation of pancreatic β cells from stem cells is enhanced by manipulating the cytoskeleton.

In our article published this week in Nature Biotechnology, we discover that the insoluble microenvironment plays a major role in directing differentiation fate from human pluripotent stem cells (hPSCs) to β cells and other endodermal lineages, including exocrine pancreas, intestinal cells, and hepatocytes [1]. By targeting the state of the cytoskeleton with substrate stiffness, cell arrangement, or chemicals, we were able to control differentiation fate to pancreatic endocrine. Using these novel insights of the microenvironment’s role in pancreatic cell fate selection, we developed a new differentiation protocol in a planar format, generating improved β cells with enhanced function and the ability to rapidly reverse severe pre-existing diabetes in mice.

Treatment of diabetes has long been considered to likely be one of the first biomedical applications of hPSC differentiation. Many potentially useful cell types, such as neurons or cardiac muscle, would need to be integrated into the associated patient’s organ, such as brain or heart, in order to be clinically useful, which is very challenging. In contrast, the field has learned from transplantation of islets containing insulin-producing β cells from cadaveric donors that these cells can be placed into non-native anatomically locations. Conceivable, these cells can function as long as they receive sufficient nutrients and oxygen, are exposed to the glucose level immediately reflective of that in the blood stream, and are able to deliver insulin into the blood stream rapidly. But a major barrier to widespread clinical success has been robust differentiation of mature β cells.

Building on many years of progress studying pancreatic development in animal models and successes making progenitor and intermediate cell types in hPSCs, I working with a team in Dr. Douglas Melton’s laboratory at Harvard University was successful in deciphering the necessary signals to specify fate selection into what we termed stem cell-derived β (SC-β) cells [2]. Since then, my group and others have continued to develop and refine protocols for generating SC-β cells. Shared features of the approaches used in these prior studies were soluble factors to activate or inhibit signal transduction pathways as well as three-dimensional cell arrangements, with the common rationale for the latter being the hand-waving argument of it being “more physiological”.

Early into his time in my lab, Dr. Nathaniel Hogrebe, a postdoctoral fellow and first author of our new article, questioned why we weren’t modulating the microenvironment in addition to adding soluble factors. Hypothesizing that specific extracellular matrix (ECM) proteins could be controlling differentiation, he performed a small screen, coating several ECM proteins onto tissue culture plastic and differentiating hPSCs with our SC-β cell protocol at the time. To our surprise, we found all conditions promoted pancreatic progenitor markers while drastically inhibiting endocrine markers. This caused us to reevaluate our hypothesis and discover that stiffness via the state of the cytoskeleton was a major determinant of endocrine cell fate.

This resulted in a novel SC-β cell differentiation protocol. These new SC-β cells had enhanced glucose-stimulated insulin secretion and expression of genes associated with insulin processing and secretion. Excitingly, these cells were able to reverse severe pre-existing diabetes in mice, almost as fast as islets from cadaveric islets. An important feature of this protocol is that it works across several different hPSC lines. In contrast, an unfortunate fact about most reported hPSC differentiation protocols to any cell type, not just SC-β cells, is that it commonly works well with one or a small number of cell lines and weakly or not at all for many others. Our new article shows that by controlling the state of the cytoskeleton, hPSC lines that did not work well or did not work at all with prior protocols now differentiate into highly functional SC-β cells.

Another important aspect of this work is that it solves a longstanding mystery in the field as to why three-dimensional cell arrangements were required by prior SC-β cell differentiation protocols. It appears that by using three-dimensional cell arrangements, prior protocols by us [2,3] and other groups [4,5] were unwittingly changing the state of the cytoskeleton to promote endocrine differentiation. In contrast, our Nature Biotechnology article has rationally designed a differentiation protocol taking into consideration the state of the cytoskeleton, resulting in an enhanced protocol that works better across multiple hPSC lines.

Prior differentiation protocols for generating SC-β cells are highly ineffective on tissue culture plastic, which is a common cell culture format in the hPSC field. Our study discovered that the inability to generate SC-β cells on tissue culture plastic is because the high stiffness of plasticware induces a highly polymerized cytoskeleton that inhibits endocrine induction. In prior SC-β cell protocols, this necessitated three-dimensional cell culture, commonly in stirrer flasks or on shakers. This has created a high hurdle that labs must overcome to be able to generate these cells, and many have found the technological and financial impedance of this requirement prohibitory to effectively generating SC-β cells. Our development of a SC-β cell planar protocol abrogates many of these hurdles, making SC-β cell differentiation accessible to the many labs with conventional hPSC culture and differentiation expertise and without needing the expensive equipment to operate stirrers in an incubator. A major hope of mine and my team’s is that our Nature Biotechnology article detailing this new protocol catalyzes more research groups to generate and study SC-β cells, accelerating progress for developing novel diabetes therapies. 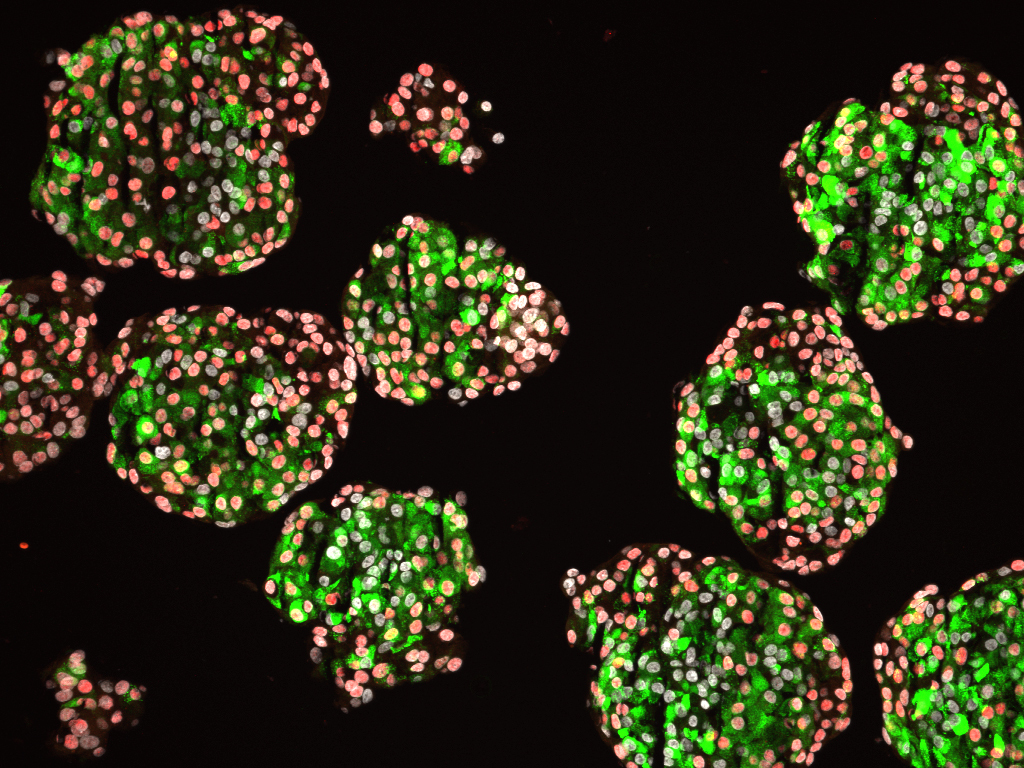