High resolution optoacoustic imaging can be used to interrogate tumor vessels, including monitoring of therapies as well as predicting their outcome. It provides new insights through non-invasive imaging that would be difficult to obtain otherwise and can support development of new therapies
Jan Grimm
Professor, Attending, Lab Head, Memorial Sloan Kettering Cancer Center
Follow
Like Liked by Liangyi Chen
0

Over the last decades, many imaging modalities were employed to monitor tumor growth and cancer development, and to better understand the mechanisms behind treatment effects. However, especially in pre-clinical research, most in vivo imaging modalities such as MRI, CT or nuclear imaging suffer from relatively low spatial resolution, hindering deeper insights into physiological processes. If going for high-resolution, invasive procedures were necessary, and only small fields of view could be examined as for example in intravital microscopy.

This project was born when the Director of the Institute for Biological and Medical Imaging at the Technical University of Munich and Helmholtz Center Munich, Prof. Vasilis Ntziachristos, was staying for a sabbatical in our lab at Memorial Sloan Kettering Cancer Center in New York and discussed a new optoacoustic imaging approach, raster-scanning optoacoustic mesoscopy(RSOM). Since we were interested in interrogating tumor vascularity, RSOM appeared to be the perfect match, so we immediately decided to explore this new imaging modality together. Also at the same time, we formed a collaboration with Prof. Avigdor Scherz from the Weizmann Institute of Science in Israel to explore his new approach of vascular-targeted photodynamic therapy (VTP), a therapy that directly attacks tumor vasculature. We had therefore the perfect combination of a new imaging modality, a new therapy and interesting underlying biology and a diverse group of researchers with different expertise: an engineering team, researchers with extensive background on the therapeutic application and investigators from the in-vivo imaging field to monitor vascular changes.

As an optoacoustic modality RSOM excites the tissue with a high-pulsed 532 nm laser, generating short, local thermoelastic expansions of the absorbers within the tissue, in this case due to the light absorption by hemoglobin. These thermoelastic expansions lead to the generation of ultrasound waves, which can then be detected by a high-frequency ultrasound transducer to enable the visualization of the microvasculature of the whole tumor and its surrounding tissue.

Many therapies for cancer treatment were explored in the past, always trying to find the most effective way to not only treat the primary tumor but also prevent metastasis formation and recurrence, simultaneously not impairing non-affected tissues. TOOKAD VTP is a promising new approach that has been approved for focal treatment of low risk prostate cancer by the European Community, Mexico and Israel and is now clinically explored in MSKCC for this and other cancer indications. This therapy uses a systemically applied photoactivatable agent (padeliporfin, Tookad®) and an immediate local illumination of the tumor by a low-powered laser in the near-infrared for better tissue penetration. Excitation of the photosensitizer leads to the generation of reactive oxygen species within the tumor vessels, resulting in endothelial damage, rapid vascular collapse, and therefore depriving the tumor of nutrients and oxygen, culminating in complete tumor ablation. However, the complete underlying mechanisms were still not fully understood.

Not only were we able to establish RSOM imaging for monitoring detailed changes of the vascular bed during tumor growth but also to gain completely new insights into the mechanism of VTP. RSOM allowed the generation of outstanding images of tissue response and microvascular changes after therapy, detecting occlusion of single vessels as early as 5 minutes after VTP, followed by hemorrhage within the tissue due to vessel leakage, providing the oxygen required for further therapy action through radicals. We also discovered vascular normalization within the tumor tissue at later time points after treatment, accompanied by ischemic reperfusion of initially non-vascularized areas of the tumor with an ultimate breakdown of the whole vasculature. Discovering especially the process of ischemic reperfusion might enable treatment optimization and access to before non-accessible sections of the tumor.  Using RSOM gained features, we could furthermore distinguish VTP-responsive from -resistant tumors within few days of therapy and predict treatment outcome, at much earlier time points than the therapeutic effect was visible through the tumor volume. We also utilized the first multispectral version of RSOM by adding a second wavelength to the RSOM laser. This enabled us to distinguish oxy- from deoxy-hemoglobin and thus follow oxygenation changes after therapy. This study provided not only insights into new vascular mechanisms behind VTP but can also support the improvement of many other vascular-targeted tumor treatments by gaining unprecedented images non-invasively at high resolution. 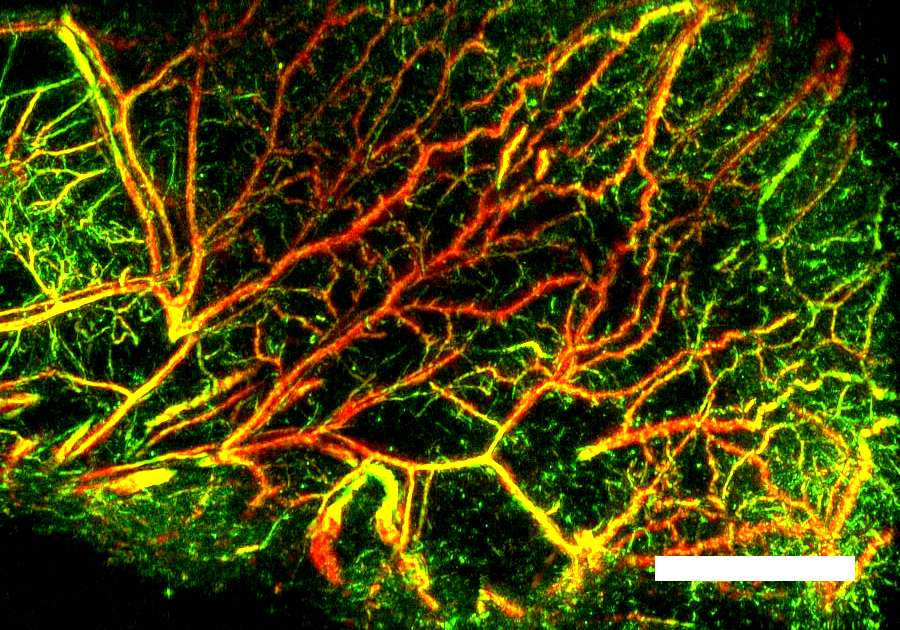 High resolution optoacoustic imaging can be used to interrogate tumor vessels, including monitoring of therapies as well as predicting their outcome. It provides new insights through non-invasive imaging that would be difficult to obtain otherwise and can support development of new therapies