We developed a technique to generate 6 species hybrids. Interesting biotechnological phenotypic traits are introduced with the combination of parental yeast genomes.
PerisD
Editorial Board Member, University of Oslo
Follow

Many industrial organisms are the result of recent or ancient allopolypoidy events. Here the authors iteratively combine the genomes of six yeast species to generate a viable hybrid.

Saccharomyces cerevisiae is a model organism for basic research and industrial applications. S. cerevisiae species contains domesticated strains applied to the production of wine, beer, as well as other processes. In the last decades, the fermentative traits of S. cerevisiae attracted the biofuel industry, which seeks to generate renewable energies from raw material, such as plant biomass. Raw materials such as corn stover biomass is deconstructed to simple sugars by applying physico-chemical treatments2 (Figure 1A). These simple sugars will be fermented to ethanol by yeast chassis strains. The first challenge is that chassis strains of S. cerevisiae does not contain the genomic instructions, which I will call bioblocks, encoding the proteins to transport and metabolize xylose, an incipient sugar in plant lignocellulosic hydrolysates. Synthetic biology tools introduced bioblocks from other organisms10,11 necessary to perform such task (Figure 1B). But the second challenge is that ethanol production is low and toxins generated during the deconstruction of plant biomass inhibit fermentation. New bioblocks are necessary to improve the efficiency and tolerance of chassis strains. The problem is that those bioblocks are unknown. Our question therefore was: How do we can combine desired industrial traits of different species in a unique organism when bioblocks encoding them are unknown?

Figure 1. Production of bioethanol scheme. A) panel is a simple representation of the generation of hydrolysates. B) panel represents the introduction of Scheffersomyces stipitis bioblocks to facilitate xylose conversion to ethanol in S. cerevisiae chassis strain.

Back in 2011, I was finishing my PhD thesis related with the genomic characterization of interspecies Saccharomyces hybrids. Those hybrids were isolated from stressful conditions, such as wine and beer fermentations at low temperatures. The genome of those hybrids contained S. cerevisiae and genome contributions from low temperature tolerant species5-7,9. The observation supported the idea that hybridization could be a shortcut to combine phenotypic traits: the fermentative power of S. cerevisiae and the tolerance to low temperatures of the other species. Excited about that idea, I wanted to apply hybrids to the biofuel industry. I joined Dr. Chris T. Hittinger’s lab in 2012 and in close collaboration with another postdoc in the lab, Dr. William G. Alexander, we started to generate hybrids with classical methods between biofuel GLBRC (Great Lakes Bioenergy Research Center) S. cerevisiae chassis strains and other Saccharomyces species. The method consisted in crossing haploid mating compatible yeast strains with inserted drug-markers in the genome to generate allodiploids8,9 (Figure 2). The insertion of drug markers in a specific chromosome location imposes a selective pressure in the hosting chromosome during selection. To remove that pressure, in 2014, we generated plasmids with those drug-markers to facilitate the removal of those markers after hybrid selection. During a lab meeting, we realized that the DNA backbone of the new plasmids contained a endonuclease gene (HO), that in haploids can facilitate mating type switch3 (Figure 2). We knew that some industrial interspecies hybrids were generated by a mechanism called rare-mating, where some diploid cells containing both mating types, and not competent to mate, can become competent by converting both mating types to the same type or by inactivating one of the MAT copies9. The competent diploid can now be crossed with a haploid or another competent diploid, generating two species hybrids (allotriploids or allotetraploids). Dr. William G. Alexander tested if artificially expression the HO in diploids can facilitate the mating switch. He successfully generated mating competent diploids, who originated allotetraploid yeasts cells1 with our new HyPr (Hybrid Production) technology.

In 2014, I worked together with Ryan V. Moriarty, an undergraduate student that joined to the lab. Ryan was an enthusiastic student, who started in the lab isolating wild yeasts, but she got so excited about our GLBRC projects, that she quickly moved to new challenges. Ryan was involved in characterizing the tolerance to hydrolysate toxins and xylose fermentative capabilities of wild Saccharomyces strains. We observed that none of the tested wild strains contain all of the desired industrial traits, but some have natural tolerance to toxins, and others could metabolize xylose8. The problem again is that the bioblocks responsible of those phenotypes were unknown. In 2016, Ryan started to test whether HyPr could be used serially to cross and combine multiple genomes. By a series of time consuming crosses, she got, for the first time in the world, a yeast cell with genome contributions of six species. The result was well-received in international conferences, such as ISSY33 (Ireland, 2017) and ECFG15 (Rome, 2020). A Hittinger lab senior scientist, Dr. Russell Wrobel, created more HyPr plasmids containing different dominant selectable marker to better facilitate these serial crosses. He then took the challenge to replicate and expand on Ryan’s experiments. This method, we call iHyPr (iterative Hybrid Prorduction), reduces time and facilitates the way higher order interspecies hybrids are generated (Figure 2). Russell generated three new six species hybrids, using different crossing scenarios, where the hydrolysate tolerating, xylose-metabolising, S. cerevisiae chassis strain was included. Additionally, two undergraduate students from the Dr. Alexander’s lab, Mira G. Basuino and Emily J. Ubbelohde, replicated the crosses to get the frequency of successful matings. By whole genome sequencing the new hybrids by the Joint Genome Institute (JGI) and using SppIDer, our new bioinformatic tool developed by an excellent PhD student Dr. Quinn Langdon4, we demonstrated our hybrids looks like a species of frankenyeast, a yeast with pieces of multiple species.

Later on, we tested if those new three yeasts could retain the xylose utilization trait and other traits from the non-chassis wild yeasts. We took those hybrids with a highly instable genomes, which cell size and genome content estimated by a new Hittinger’s postdoc, Dr. Kaitlin J. Fisher, were positively correlated, and they were submitted to experimental adaptive evolution. We expected that the important bioblocks would be selected to survive in the tested conditions. We observed that the xylose utilization and other traits from the non-chassis strains were retained.

Based on our results, we envision that our iHyPr technology can facilitate the development of new industrial yeast strains by combining bioblocks of different species. improving efficiency of industrial processes or the production of new added-value compounds. iHyPr will help to unravel the association between phenotypes to genotypes by evolving the new yeasts in controlled conditions of interest. And this technology might also contribute to cell biology research as some cells from other eukaryote organisms undergo increased genome size, a result that impacts the fitness, facilitating adaptation to new conditions.

PerisD
Editorial Board Member, University of Oslo
Follow
Dr. Peris has a Ph.D. in Biotechnology, in 2012 at University of Valencia. David Peris has expertise in comparative genomics, fungal evolution, highthroughput microbial phenotyping, bioinformatics and biotechnological applications. He is a postdoctoral researcher in University of Oslo, Norway, since 2019. He is studying mechanisms of speciation and adaptation in mushroom-like organisms and yeasts. He is responsible of the implementation of bioinformatics tools to study the fungal genomes. He has also developed his research in four different countries: i) Institute Cavanilles of Biodiversity and Evolutionary Biology (2007-2012) (FPI Fellow), Spain. His main task was the genome characterization of interspecies yeast hybrids isolated from industrial processes; ii) University of Manchester (2010), UK. There, he studied the proteome composition and the formation of chimeric protein complexes in interspecies hybrids; iii) the University of Wisconsin-Madison (2012-2017) (Postdoc Researcher). He performed population genomics in wild and domesticated yeasts, he developed new molecular methods to generate synthetic hybrids, and he applied yeasts to the biofuel and brewing sectors; iv) Institute of Agrochemistry and Food Technology (IATA) – CSIC (2017-2019) (Marie Sklodowska Curie Postdoctoral Fellow). There, he studied the influence of the mitochondrial inheritance in yeast hybrids in the tolerance to temperature, industrial stresses and genomic retention. He also lead the application of bioinformatics pipelines to study the genome, transcriptome and other omics in Tirant HPC. Dr. Peris is co-author of 24 papers in indexed international journals , 3 reviews. More information: Publications in google scholar: http://goo.gl/jfahYH. Papers reviewed in publons: https://goo.gl/K5BtIz 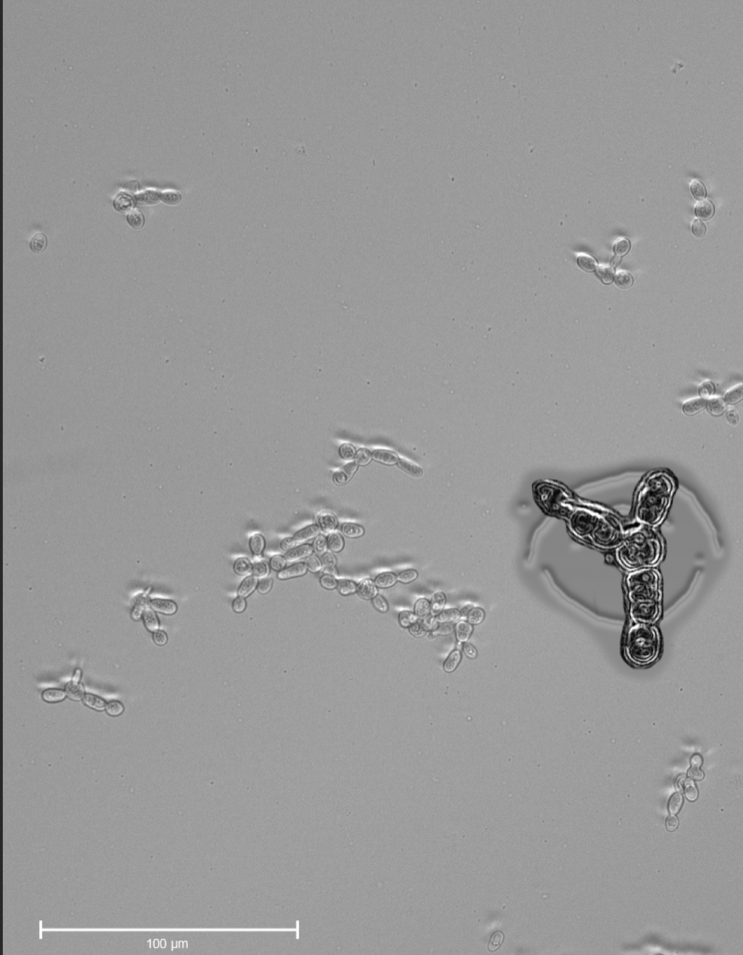 We developed a technique to generate 6 species hybrids. Interesting biotechnological phenotypic traits are introduced with the combination of parental yeast genomes.