Nanobody delivery: improving on nature with chemistry and immunology

Stability and health in multicellular organisms (such as humans) depend on communication between cells. Cells produce and transmit messages through the synthesis and release of signaling molecules that can act on neighboring or distant cells with a complementary receptor. Nature has evolved to use a complex network of signaling molecules to facilitate this intricate homeostatic dance. When intercellular signaling is disrupted, disease is often the outcome. Science has seized upon the realized importance of intercellular signaling to design therapies that correct signaling imbalances associated with disease states. The molecules used to correct dysfunction often resemble those produced by cells. Although this approach is sometimes effective in identifying new medicines, more often alterations must be made to the structure of the naturally occurring molecules to improve their properties when used as drugs.

One system of therapeutic interest controlled by intercellular signing is that of calcium homeostasis. The peptide parathyroid hormone (PTH) and its receptors (PTH-receptor 1 and 2, PTHR1/2) are crucial in maintaining calcium levels at a near constant level in the blood stream, as well as regulating bone turnover. A fragment of PTH [PTH(1-34)] that potently binds and activates PTHR1 and PTHR2 signaling is used clinically to treat osteoporosis. Although both PTHR1 and PTHR2 respond to PTH(1-34), they are expressed in different tissues and play distinct physiological roles. Since PTH(1-34) is not specific for PTHR1 or PTHR2, it cannot easily be used to investigate the specific function of these receptors. The lack of selectivity for PTH between related receptors is not an anomaly. Among the secretin family of G protein-coupled receptors (GPCRs), which includes PTHR1/2, there are two receptor subfamilies in which a single prototype peptide ligand activates multiple subfamily members: PACAP activates VIP1R/VIP2R/PAC1R and CRF activates CRF1R/CRF2R. This trend is not restricted to secretin GPCRs. Adenosine binds to four distinct class A GPCRs, angiotensin-1 binds to two distinct GPCRs, epinephrine binds to five distinct GPCRs, and IL8 binds two distinct GPCRs.

Although naturally occurring molecules provide a useful starting point in the design of drugs and tool compounds, there is no general method for turning a non-selective ligand into one with specificity for a single receptor subtype. For overcoming the thorny issue of selectively targeting a single target among closely related homologs scientists have repeatedly turned to the adaptive immune system and the impressive specificity of antibodies. We reasoned that leveraging the affinity and specificity of an antibody could provide a path towards receptor subtype-specific ligands.

With this problem in mind we began the synthesis and evaluation of conjugates consisting of single domain antibodies (nanobodies) and synthetic PTH peptide fragments. Nanobodies correspond to the variable portion of camelid (camel, alpaca and llama) heavy chain only antibodies. They are the smallest naturally occurring antibody fragment that maintains antigen binding capacity. Because nanobodies consist of only a single domain they can be produced in high yield (up to 50 mg/L) using bacterial expression systems, which stands in contrast to conventional antibodies which must be produced using more complex and carefully controlled expression systems. The ability to produce large quantities of nanobodies provided practical advantages for developing the chemical methods needed to prepare conjugates of synthetic peptides and nanobodies in which both pieces retained functionality. Since PTH requires a free N-terminus for bioactivity and nanobodies bind to their target near their N-termini we ultimately decided to prepare C-to-C terminal fusions of nanobodies and synthetic PTH fragments. One important feature of this approach is that the use of synthetic PTH fragments allowed for easy incorporation of non-natural amino acid residues using solid phase peptide synthesis, which is cumbersome or impossible using the cellular translational machinery. It is easy to envision this approach being extended to other synthetic polypeptides or small molecules. Another highlight is that the C-to-C terminal fusions were readily prepared using site specific appendage of azide containing amino acids to nanobodies through the use of Sortase-A labelling (sortagging).

In analyzing nanobody-PTH conjugates for biological potency and specificity we made two important and surprising findings. The conjugation of PTH(1-34) with nanobodies that targeted specific receptor variants neither enhanced the potency of PTH(1-34) nor provided specificity for receptors targeted by the nanobody. This was contrasted by findings with PTH(1-11) and conjugates in which nanobody conjugation enhanced both ligand potency and specificity for the receptors targeted by the nanobody. We attribute the difference between PTH(1-34) and PTH(1-11) with respect to the impact of nanobody conjugation to differences in peptide-receptor affinity: PTH(1-34) binds with a Kd of ~1 nM whereas PTH(1-11) has a Kd of ~10 micromolar. Thus, nanobodies effectively augment activity and specificity of weakly binding ligands, but not ligands that already bind tightly. The second important finding was that the conjugation of PTH(1-11) to a non-receptor-binding nanobody not only failed to boost ligand potency, it actually abrogated the modest biological activity of PTH(1-11). Thus, we conclude that the conjugation of a GPCR ligand to a nanobody is detrimental unless the nanobody binds at or near the site of action. This second finding is important in the context of designing selective ligands: a nanobody that binds to one subtype of receptor but not another should augment ligand activity at the bound receptor but diminish (or eliminate) activity at the non-bound receptor subtype. In other words, receptor subtype selectivity is the expected outcome when nanobody-ligand conjugates are designed appropriately.

We tested this hypothesis through the use of a nanobody that selectively binds to PTHR1 over PTHR2. The conjugation of anti-PTHR1 nanobody with PTH(1-14) provided a conjugate that was both active in mice and showed selectivity for PTHR1 over PTHR2 (>4,500-fold) that vastly surpassed the selectivity of PTH(1-34) (5-fold). It is remarkable that this approach converted a ligand with almost no receptor subtype specificity into one with complete specificity. This method for fusing a suboptimal ligand with an antibody, dubbed "conjugation of ligands and antibodies for membrane proteins, or CLAMP" should be widely applicable provided two conditions are met. First, ligands that bind receptor weakly but activate receptors at higher concentrations must be identified. Second, synthetic methods to link such ligands to antibodies without causing the complete loss of biological activity must be developed. Flexibility with regard to linkage chemistry connecting antibody and ligand might depend on the size of ligand used; it is likely that small molecules will be more sensitive to structural modifications than the relatively large peptide ligands used here. Whether these conditions can be realized is at current unknown. The modularity of CLAMP should allow many laboratories to assess this platform for cell surface proteins of interest. 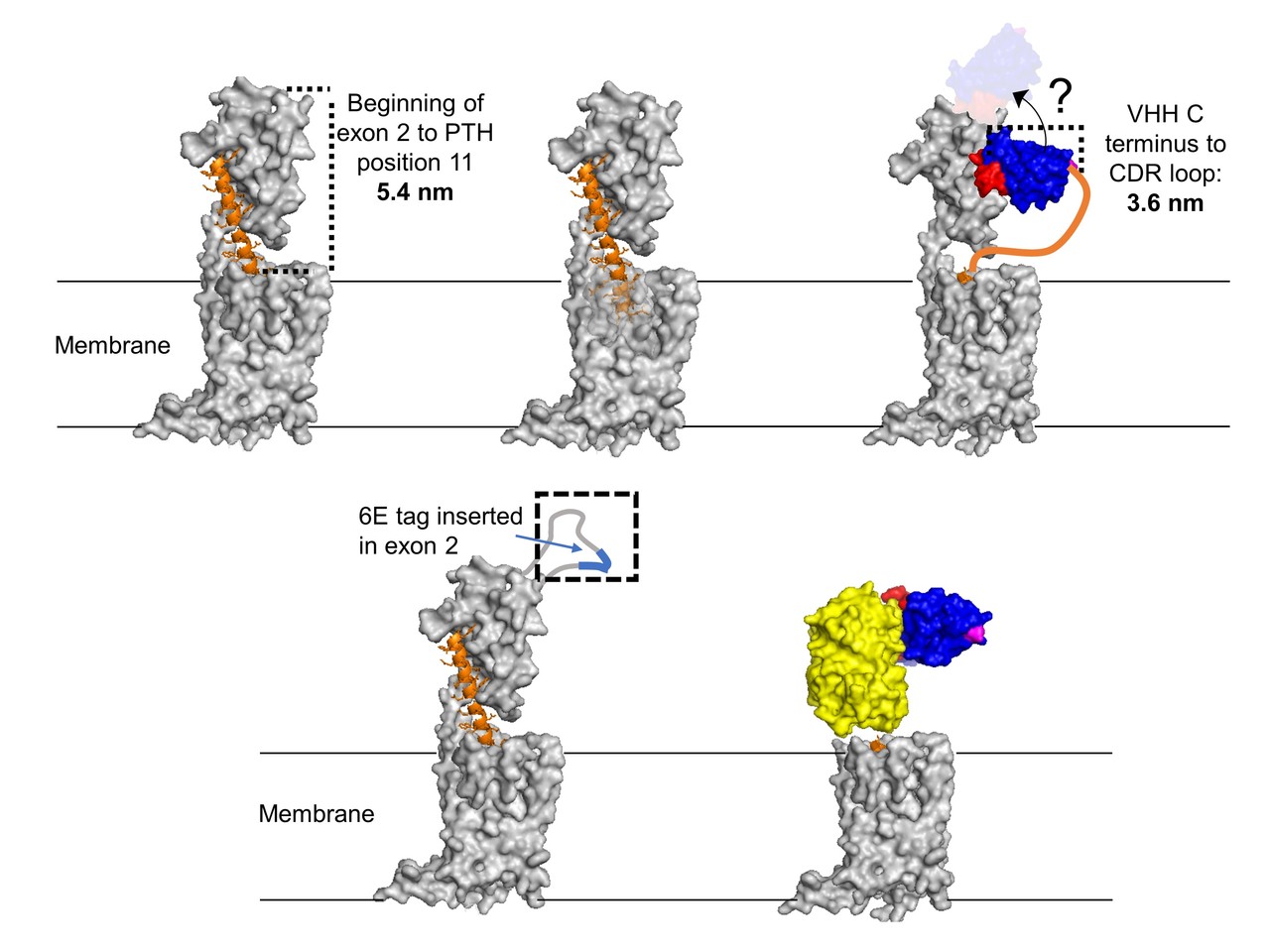 Nanobody delivery: improving on nature with chemistry and immunology

Proteins expressed on the cell surface are the major target of approved and experimental therapeutics. Despite this interest, several lack specific and potent targeting molecules. We devised a new method using single domain antibodies, modified with chemistry, to prepare strong and specific ligands.