In the present study, we investigated the effects of L. reuteri ATCC PTA 6475 on the gut microbiome of older women with good or poor responses to oral supplementation with the probiotic.
Peishun Li
Postdoc, Chalmers University of Technology
Follow
Like Liked by Evelina Satkevic and 1 other
0

Osteoporosis is a bone disease prevalent in the elderly. The disease is characterized by reduced bone mineral density (BMD), deteriorated bone microarchitecture, and decreased bone strength, which can increase the risk of fragility fractures. Although a number of drugs have been developed, the pharmacological treatment rates in patients with osteoporosis is low, due to low osteoporosis awareness, high cost or side effects of medication. Therefore, there is an urgent need to develop a novel and effective intervention for the prevention and treatment of osteoporosis.

Towards this goal, Mattias Lorentzon's team from Sahlgrenska University Hospital began to investigate the effect of dietary supplementation with Lactobacillus reuteri ATCC PTA 6475 (also known as Limosilactobacillus reuteri) on bone metabolism in patients with osteoporosis in 2015. In a double-blinded, placebo-controlled, randomized study1, 90 elderly Swedish women were recruited (Figure 1). These women were treated with L. reuteri or placebo orally twice daily for 12 months. This study demonstrated that supplementation of L. reuteri ATCC PTA 6475 could reduce bone loss by ~50% in older women with low BMD. Thus, the probiotic could be a potential therapeutic strategy to prevent postmenopausal bone loss in the elderly. However, the mechanism related to the effect of the probiotic on bone metabolism remains unknown.

Figure 1. Experimental design for the effect of L. reuteri ATCC PTA 6475 on bone metabolism in older women. Serum samples for metabolomic profiling were collected from older women with low BMD at baseline, 3, 6, and 12 months in our previous study 2. Fecal samples for metagenomic profiling were collected from good responders (GR) and poor responders (PR) at baseline and 12 months in the present study.

Following the randomized controlled trial, Jens Nielsen’s team in collaboration with Mattias Lorentzon's further investigated how L. reuteri ATCC PTA 6475 influenced the global metabolism of older women in 2018, by using the serum metabolomics technique (Figure 1) 2. During the one-year intervention in this study, older women in the placebo group underwent significant alterations of the metabolic profiles (Figure 2), which might be associated with bone loss. Interestingly, the adverse metabolic alterations in the placebo group were prevented to some extent by the oral administration of L. reuteri ATCC PTA 6475. However, it is still unknown whether probiotic supplementation affects bone health by modulating the gut microbiome.

To this end, in the present study, Jens Nielsen’s team further investigated the effects of L. reuteri ATCC PTA 6475 on the gut microbiome of older women with good or poor responses to the probiotic intake, where fecal samples were collected at baseline and 12 months (Figure 1, doi: 10.1038/s41522-022-00348-2). After one-year supplementation with L. reuteri ATCC PTA 6475, the significantly increased gene richness of the gut microbiota in the good responders was revealed (Figure 3a). In total, 16 differential species between the two groups or between the two time points were identified (Figure 3b). Also, difference in the metabolism related to biofilm formation (E. coli) between the GR and PR groups at 12 months were observed (P < 0.05). The genes including arcA, gmr, csgA and envZ involved in biofilm formation, were more abundant in the PR group than the GR group after one-year treatment (Fig. 3c). Particularly, metabolite hyocholate showed a positive correlation with species E. coli at 12 months (Fig. 4d).

Figure 3. Alterations of the gut microbiome of older women supplemented with L. reuteri ATCC PTA 6475. a) Gene numbers of the gut microbiota in the PR (n=9) and GR (n=9) groups at the two time points. b) Abundances of differential species in the two groups at the two time points. c) Differential genes involved in biofilm formation (Escherichia coli) between the GR and PR groups at 12 months. d) Correlation between metabolite hyocholate and species Escherichia coli. The blue line and grey shade indicate the regression line and 95% confidence interval; R denotes Spearman's correlation coefficient.

By systems analysis of bone metabolism using clinic traits, serum metabolomics and gut metagenomics in successive studies over the past seven years, oral supplementation with L. reuteri ATCC PTA 6475 has been suggested to have the potential to prevent a deterioration of the gut microbiota and host metabolism in elderly women with low BMD, which might contribute to the beneficial effects on osteoporosis in the elderly. Thus, our study has provided new insights into the regulation of bone metabolism and could be crucial for the development of novel osteoporosis treatments. However, further studies with much more multi-centers samples are needed to validate the identified link between the gut microbial alterations and the host metabolic changes triggered by supplementation with probiotic L. reuteri ATCC PTA 6475. 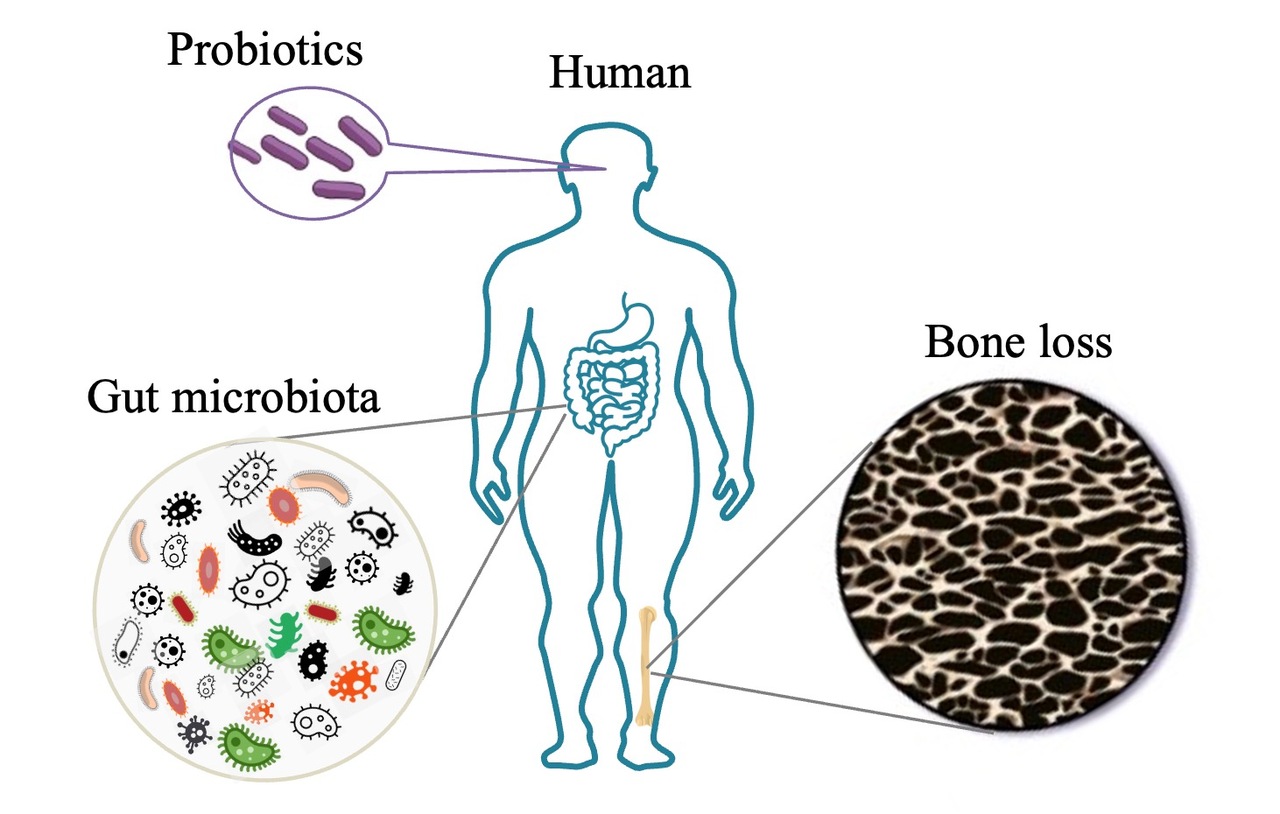 In the present study, we investigated the effects of L. reuteri ATCC PTA 6475 on the gut microbiome of older women with good or poor responses to oral supplementation with the probiotic.