In this work the authors report how human mesenchymal stem cells rapidly adapt to dynamic microenvironment through lipid raft in membrane microdomains that direct neurogenesis.

Conventionally, mammalian cells are cultured on stiff plastic or glass dishes. This is because cells have intrinsic contractility driven by the consumption of adenosine triphosphate (ATP), biological energy currency, and exert mechanical forces to their substrates. It is critical for cells to receive sufficient mechanical feedback. Therefore, stiff materials have been chosen for the cell culturing scaffolds, otherwise the cells undergo apoptosis.

Mechanical forces dictate cell fates not only in all-or-nothing fashion, like life and death, but also a wide variety of differentiation spectrum of stem cells lineages. Moreover, recent mechanobiology studies elucidated more complex regulation of stem cell fates by other structural mechanical aspects of the substrates, such as surface topography and stress relaxation, in addition to material stiffness and surface biochemical ligands1. Therefore, it becomes hot topics in mechanobiology how the stem cells integrate various mechanochemical cues to evoke various cellular responses.

In early 1960’s, it was found that cells can adhere and proliferate at interfaces of water and some types of organic solvents, including silicon oils and perfluorocarbons. From the above-mentioned scenario of cell mechanosensing, it is quite amazing that the cells can attach to the ultimately soft fluid interfaces. Subsequent research elucidated that the cells do not sit directly on the interface of two immiscible phases, rather they are grasping the protein layers assembled at the interfaces2. Driven by interfacial tension, these protein layers are stiff enough to resist cell traction forces3. It has been also shown that addition of reactive surfactants to the organic layers further strengthen the protein layers4. Researchers are exploring new modality of cell culturing by growing cells on the surface of suspended liquid emulsions.

On the other hand, our group went back to the root of the essential curiosities in mechanobiology: how the liquid-liquid interfaces were mechanically sensed by stem cells and whether they could dictate their differentiation lineages. Through the screening of various perfluorocarbons, we found spontaneous differentiation of mesenchymal stem cells (MSCs) into neuronal cells at the interface of water and perfluorooctane, owing to the adaptive nature of naïve protein nanosheets formed at the interface5. Our detailed studies elucidated that cell traction forces accelerate the fibrillogenesis of fibronectin protein at the fluid interface much more rapidly and efficiently than that on the plastic dish surfaces. At the same time, the formed fibrillar structures induce neuronal differentiation in other way around. However, it was still unclear at that moment whether the fibrous structures solely regulate stem cell differentiation and/or the increased density of biochemical ligands of fibronectin are critical. Moreover, it is unclear how the cells recognized those nanostructured ligands.

To answer these questions, we use the lysozyme protein that spontaneously form nanostructures and intentionally decorate the interfaces with the protein nanofibrils6. The surface density of the protein nanofibrils can be easily controlled by changing the pH of the deposition solutions of lysozyme. We could confirm further expression of matured neuronal markers by increased the surface density. MSCs sense the nanostructures through lipid raft structures, which are critical for the increased FAK phosphorylation and mature neural differentiation. Thus, our study highlights the significance of the utilization of adaptive nature of liquid-liquid interfaces for the applications of regenerative medicines and tissue engineering. 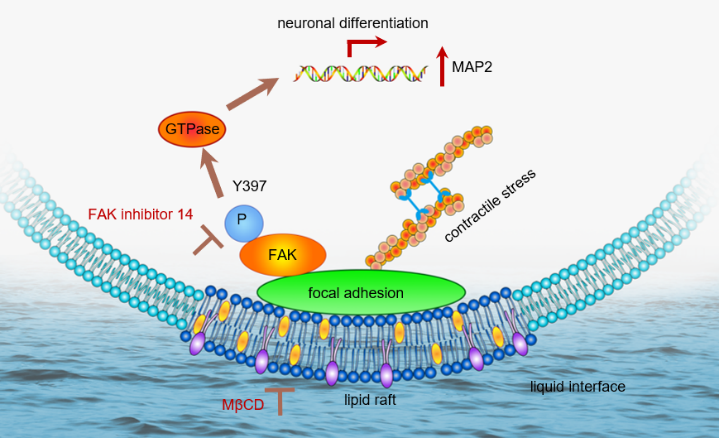