Cultured meat research has to-date been plagued by a lack of suitable and animal-component-free media. In this paper, we made one such media so that we and others could do more relevant, impactful research.
Andrew Stout
PhD candidate, Tufts University
Follow
Like Liked by Evelina Satkevic
0

A substitution of FBS in culturing of bovine satellite cells for the purpose of culturing meat is presented, addressing both basal media and growth factors in relation to proliferating and differentiating cells.

This paper was a project of necessity that was initially motivated by our frustration at the lack of suitable animal-component-free growth media for bovine muscle cell cultures that we could use in our research efforts. The entire field of cultured meat (or the production of meat through cell culture rather than tissue engineering) is predicated on the assumption that the relevant cells (e.g., muscle and fat) will be cultured in a system that is free from animal-derived inputs. However, nearly all research to-date has relied on fetal bovine serum (FBS) in the culture media. This fundamental discrepancy between research systems and the requirements of the target application greatly limits the field. We continually found ourselves making caveats to our findings—explaining that, eventually, it would be important to test our results in serum-free settings. Serum was the “spinach in our teeth,” so to speak: an awkward blemish in our research that was obvious to all. We knew that many of the companies in the space have developed or are developing serum-free media internally, but we had no way of accessing these media for our research, and it became clear that we were unlikely to access them anytime soon (particularly not with knowledge of the composition of the media in question). We therefore turned to making our own.

We started by looking at a recent serum-free media that had been developed for a different cell type—induced pluripotent stem cells1. This media, termed B8, was developed with low-cost and simplicity in mind, and so it seemed like a promising starting point for serum-free media development for cultured meat. The process of tailoring B8 for bovine muscle cells was one of brute-force: testing of additives which could render B8 suitable of inducing growth in bovine satellite cells. Most of the additives we tested proved ineffective, despite often having support from the literature. This serves to emphasize the complexity of biological systems—just because an additive works in one culture media or with one particular cell type, does not mean it will work in all culture media or with all cell types. And just because an additive did not work in our efforts does not mean that it will never work in serum free settings.

Ultimately, we found that the addition of recombinant albumin rendered B8 effective for growing bovine satellite cells. We named this media Beefy-9 and showed that it is the first media—to our knowledge—to meet the basic requirements for a foundational media for cultured meat. Namely:

Beefy-9 is by no means perfect. It is still prohibitively expensive for muscle cell culture at the scale required for cultured meat, and some aberrant cell phenotype changes (i.e., lipid accumulation) were observed over long-term culture. However, to our knowledge Beefy-9 is the first media described in the literature which enables muscle cell growth and differentiation over multiple passages in a fully animal-component free system (Video 1). As such, we hope that it is a valuable first-step towards optimized serum-free media that are accessible to researchers around the world, and which can enhance the pace and relevance of cultured meat research throughout the field. 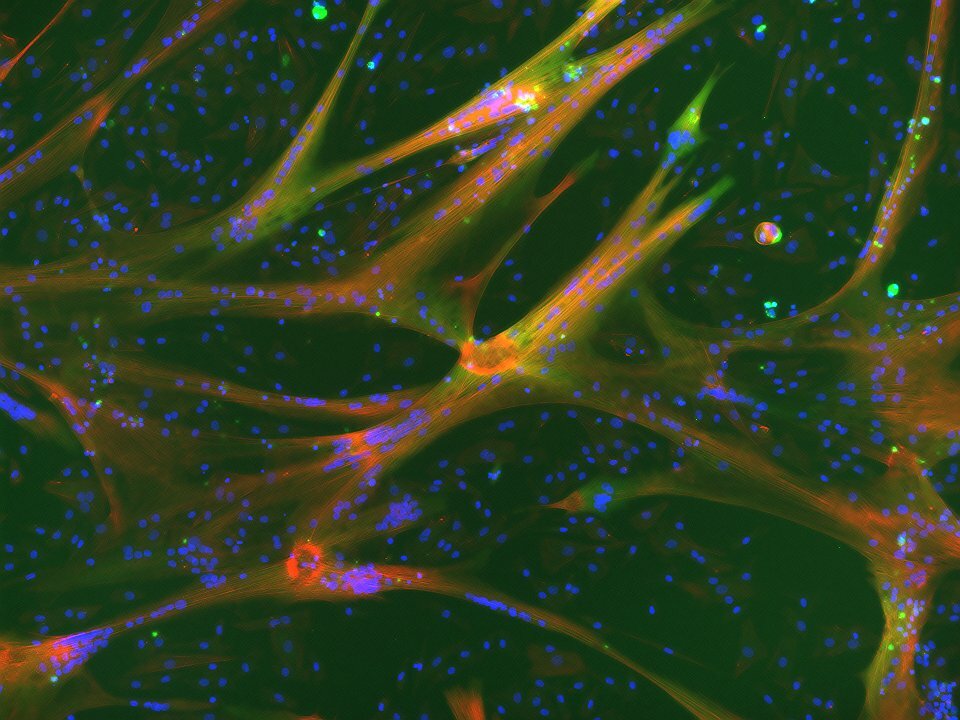 Cultured meat research has to-date been plagued by a lack of suitable and animal-component-free media. In this paper, we made one such media so that we and others could do more relevant, impactful research.