Not every article in the Nature community starts with a good idea and hardly any is meticulously planned from start to finish. And even in this rare case things tend to go off the course at some point. Our recently published paper in Nature Communications started with a fortunate accident which turned to a foundation for a principally new concept in drug delivery.

In 2020 during a short break between the lockdowns, our team was busy with something completely different from the conceptualization of the drug delivery approach. We were developing a photoacoustic system intended for analysis of nanoparticle dissolution rate1. In ”Friday evening” experiments, I casually fiddled with this expensive new device measuring the dissolution rate of all nanomaterials within my reach. Some dissolved slightly slower than the others, some - slightly faster, but one material behaved in a completely different manner. Iron-based MIL-101 metal-organic frameworks (MOFs) stood out for their stability in water but completely degraded in phosphate-base buffers in a minute-scale timeframe.

MOFs are porous materials built-up of metal-based clusters interconnected by organic linkers (Figure 1). They are considered as promising drug carriers and sorbents. Any insight on how their properties depend on the environment would be welcomed by the community. However, these results were non-essential to say the least for the photoacoustic study. And still interesting questions cropped up. Are such rapidly degrading particles useful at all, and if so, their possible application scenarios? Why are nearly all materials used for controlled release are designed to release therapeutic molecules gradually? Is this approach rational?

This Nature Communications paper emerged from our attempt to give the answers, to rationalize, and to justify the use of rapidly degradable nanoparticles in biomedicine2. We assumed that a rapid elevation of the drug concentration within the blood vessels would drive diffusion of a drug deep into surrounding tissues enhancing its bioavailability and therapeutic efficacy. This outburst of the drug local concentration can be potentially achieved by rapid drug-loaded nanoparticle degradation in the microcapillaries of target tumour or metastasised organ, following their targeted delivery (Figure 2). We coined a term for this approach - FlaRE, the shortening from Flash drug Release in Endothelium.

The hypothesis was lucrative for two reasons. First, the drug delivery in this setting would not require extravasation of nanoparticles from blood vessels. Hence it would be an alternative to the “enhanced permeability and retention” (EPR) effect, which failed to demonstrate the treatment of small tumours and metastasis with no leaky vessels present3. Second, the existing concept in drug delivery postulates that it is the gradual rather than rapid release of encapsulated drug is an essential feature for nanocarriers. We decided to reconsider the existing concept and give our FlaRE concept a try.

With the original idea and a promising type of nanoparticles at hand we started our journey. First, we developed a mathematical model to describe how a drug would eventually permeate deep into tissue when it released from the nanoparticles to the bloodstream with different rates. Our model showed that drug concentration would be much higher for the FlaRE drug delivery mode in comparison with nanoparticles eluting drug slowly or in comparison with infusion of the free drug.

Then, we investigated the mechanism behind the rapid dissolution of MIL-101 nanocarriers from the point of view of material science. The MOFs undergo structural transformation in blood serum. Phosphate and hydroxide ions attack the iron clusters effectively displacing the organic linker (here 2-aminoterephthalic acid). The linker then is released into environment, while the iron core remains in the particle structure. In turn, it leads to the pore collapse, which manifests in the rapid decrease of volume of the particles and formation of the amorphous iron phosphate species. Further hydrolysis of these species leads to the emergence of a biocompatible low-crystalline form of ferrihydrite. As a result, almost all the drug loaded into the nanoparticles pores is released to the environment. Importantly, this process takes less than 15 minutes. Therefore, after administration to the bloodstream the nanoparticles release their cargo even before the cells can uptake them. The latter has been confirmed in a series of in vitro experiments, including direct observation of nanoparticle endocytosis via transmission electron microscopy. The described mechanism empowers high concentration of the initially loaded drug in the blood vessels where nanoparticles lodge.

Finally, we performed an animal study to demonstrate applicability of the proposed drug delivery approach in vivo. Initial finding showed a remarkably effective pulmonary delivery of nanoparticles loaded with fluorescent dye in healthy mice. About 60% of the injected dose were trapped in the lung capillaries. As proposed, the particles underwent structural transformation and the released dye permeated surrounding tissue. Importantly, our experimental data in these experiments fitted our mathematical model remarkably well. It encouraged us to perform tumour treatment. We developed two models of highly aggressive metastatic melanoma in the lungs: simulated early and late stage metastases, when proliferation of cancerous cell to the lung tissue starts. We found that the developed nanoparticles loaded with doxorubicin released drug in a flash manner, leading to the surprisingly effective tumour treatment in comparison with the free drug. FlaRE delivery led not only to a decrease in the quantity of the observed metastases but also size reduction of the remaining ones. These two processes resulted in a significant improvement in the animals’ survival (Figure 3).

I believe that this work brings us one step closer to the direct implementation of rational design of materials for controlled drug release. FlaRE drug delivery vastly expands the toolbox of drug carriers by redefining their desirable properties. Particularly, it moves fast drug release to the top of the priority list. I expect that a new class of rapidly biodegradable or drug-releasing biomaterials will eventually emerge, which will include swiftly degradable metal organic-frameworks, hydrogels, and inorganic porous crystals. This option has not been previously considered worthwhile in the field and will represent a paradigm shift in the nanomedicine design. 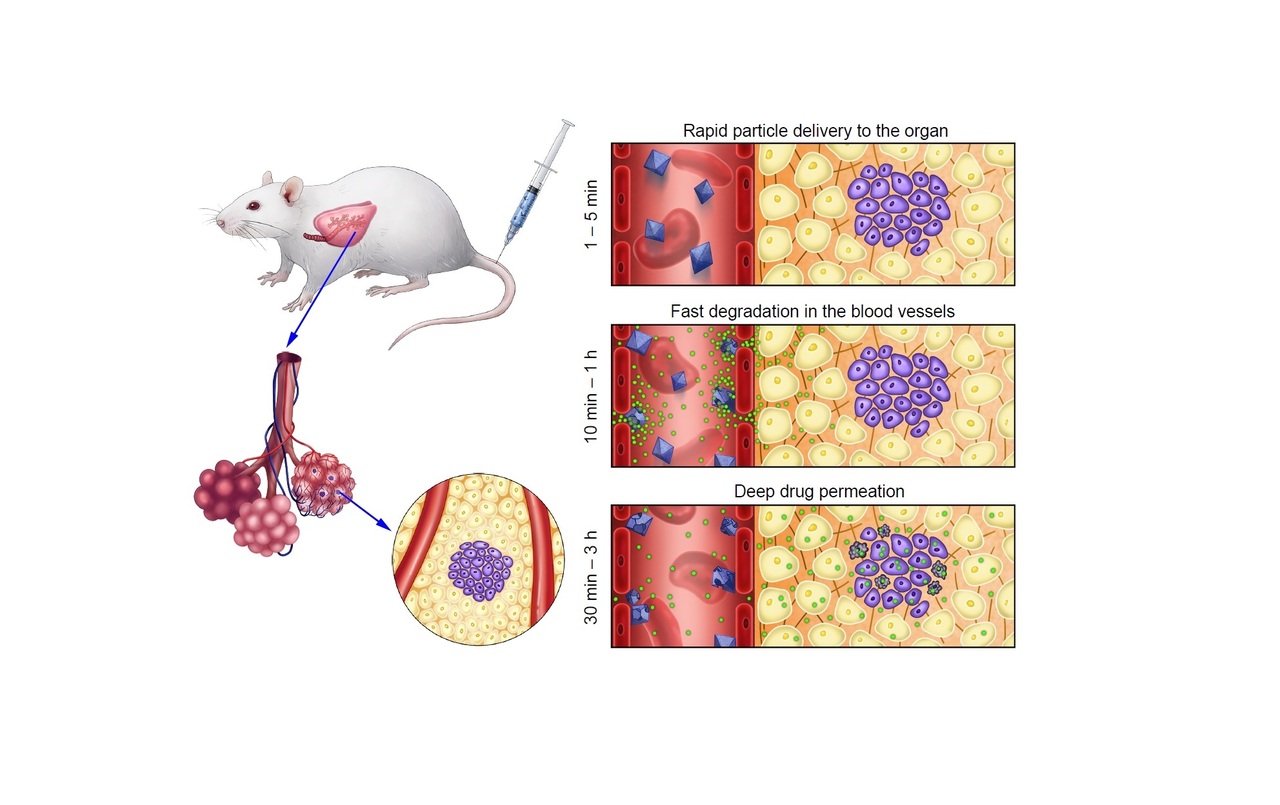