The development of rsGCaMP. Introducing a photoswitchable sensors prototype for super-resolution microscopy and optoacoustic (photoacoustic) imaging.
Juan Pablo Fuenzalida Werner and Andre C. Stiel
2 contributors
Like Liked by Evelina Satkevic and 2 others
0

Calcium and other analytes can be imaged at super-resolution and in vivo with photo-switchable sensors.

Photoswitching proteins labels, which can be switched between an on- and off-state by illumination with light of distinct wavelengths, are a crucial element for several fluorescence-super-resolution imaging techniques. Simultaneously their use in optoacoustic (also termed photoacoustic) imaging as a means to improve sensitivity gains traction. Not surprisingly, the engineering of photoswitching proteins is a major field in the large area of fluorescent and chromophoric protein engineering.

To a much larger extent, the same is also true for the engineering of protein-based sensors, mainly for optical imaging associated with such illustrious names as the GCaMP family of Ca2+ sensors. Such sensors allow us, for example, to view the distribution of small molecules and ions in cells to better understand the signaling processes that govern life. Now, combining both photoswitching and sensing, resulting in small molecule and ion sensors that can be used for super-resolution or optoacoustic imaging, is a relatively obvious thought - yet it has never been successfully undertaken (Figure 1, top right corner). Thus, when Andre Stiel presented to Kanuj Mishra and me the idea and concept of photoswitchable sensors, we were both excited and skeptical on the, likely not easy, endeavor of combining the photoswitching and sensing photophysics.

We started exploring the concept of photoswitchable sensors with Ca2+ sensors since Ca2+ sensors are the most renowned class of sensors, especially the GCaMP type, and thus, provide abundant knowledge on their photophysics, structures, and functionality. With the task at hand, we embarked on one of the many joys we share in the group - our love for tabulated data and PDBs.  We enjoy looking at a single protein crystal structure for hours, looking at it from every angle and detail, so our brain can get what we call the "protein feeling." We did this with several Ca2+ sensors and photoswitchable fluorescent proteins. By immersing in the different proteins, we built a table with all the mutations we believe transformed a classical fluorescent protein into a switchable one. Next, we looked at crystal structures of the GCaMP Ca2+ sensor family to decide the best mutation to incorporate to see photoswitching. Finally, due to the high similarity between EGFP used in GCaMP and the photoswitching protein rsEGFP2, we stopped complicating the scenario and decided to follow Occam's razor and used rsEGFP2 as the primary model to extract our "switchable mutations." It was not an easy task since the more critical positions for photoswitching were either absent or distorted in GCaMP because of the Ca2+-binding domain insertion, which lead us to compare a range of different positions and mutations. For example, we tried to incorporate every mutation that transformed EGFP to rsEGFP2 and included amino acid insertions to compensate for the lack of homology between GCaMP and rsEGFP2. Obviously, it did not work, so we started to eliminate mutations one-by-one until we found the set of modifications that preserves Ca2+ sensitivity but incorporate photoswitching.

After the first variants that showed Ca2+ concentration-dependent photoswitching, we realized that we needed structural information to improve our sensor's photophysical properties. With our lab and coffee neighbor, Robert Janowski from Dirk Niessing's group, we started to try crystalizing our first variants. As Akerboom and others report, it is "easy" to obtain crystals – however, the structures often show swapped-dimers that distort the biological interface and are useless for a detailed understanding of the interdependence of the chromophore and Ca2+ binding regions. Robert's determination was crucial; he tried every protein variant we could think of to weaken the "artificial" dimer interface. Finally, after almost 50 attempts, we found the set of mutations that yielded crystals with a monomeric protein. Fortunately for us, our new variant also showed better photophysics, so we were lucky enough to kill two birds with one stone.

Nonetheless, the main problem of our first variants was the low quantum yield; they were very photostable but almost non-fluorescent. Our crystal structure showed that the chromophore was lacking stabilization, so its deactivation mechanism was fully non-radiative. To put it metaphorically, we had a dancing chromophore. Thanks to the "protein feeling" and our experience in “taming” chromophores, we increased our sensor fluorescence by introducing mutations that added extra hydrophobic/aromatic and hydrogen bond points in the protein barrel. In short, we stabilize the chromophore via a molecular hug (Figure 2). Following this scheme, we managed to arrive at a non-spectacular but already useful fluorescence quantum yield of 10%.

With this variant in hand and eager to see how it would perform in imaging, we approached Ilaria Testa and her postdoc Francesca Pennacchietti, and asked to give it a shot using her MoNaLISA fluorescence super-resolution imaging technique. As a sample, we finally settled for a simple targeting of the photoswitching Ca2+ sensor to the lumen of the endoplasmic reticulum (ER). While, due to the dimness of this first prototype, the images are far from the beauty of super-resolution images we are already used to from this technique, it proves that our sensor allows capturing super-resolution images when bound to Ca2+. This should eventually allow for super-resolution images of Ca2+ dynamics like for example Ca2+ microdomains between the ER and mitochondria.

Finally, we wanted to show that the photoswitching linked to sensing can also be used in optoacoustics. This is obviously only a conceptual demonstration due to the green absorbance of this prototype being utterly unsuited for tissue imaging. The concept of photo-switching optoacoustics relies on photoswitching to modulate the signal from labeled cells, thus making it easier to separate them from the non-modulating background signal. Since the first introduction of the concept, Andre's lab also showed that it can be routinely used in optoacoustic imaging using commercial instrumentation to put optoacoustics on the map for life-sciences in vivo imaging.

One of the challenges we faced was to acquire optoacoustic images in a wavelength range not optimal for in vivo imaging. Being associated with the laboratory of one of the key players in optoacoustics imaging, Vasilis Ntziachristos, we had a lot of support to play and adapt the normal in vivo imaging systems, tailored for near-infrared imaging, to be used with blue light. Several iterations with the patient help of Andriy Chmyrov, Yuanhui Huang, Uwe Klemm, and Christian Zakian were needed to optimize the imaging conditions. We used all our "lego/hacker" skills to mount lasers, LEDs, function generators, old computers, and arrays in this challenge (Figure 3). Not to mention the enormous amounts of agar, bacteria pellets, and fake blood we used to validate our Frankenstein devices. Finally, the long days of measurements spiced with fried chicken, curries, and burritos yielded the images we share in our article. Despite the green character of rsGCaMP we could resolve the sensor loaded with Ca2+ and distinguish against a Ca2+ free sensor, even in 1-2 mm of vascularized tissue. This nicely demonstrates the power of the photoswitching concept and sparks the development of suitable NIR photoswitching sensors.

In general, one could say that the idea was in the air. For some years, the Schreiter lab has already shown us that chromophore photophysics can be linked-to sensing, with their CaMPARI class of sensors allowing effective neuronal highlighting. Beyond that, a recent pre-print joining Peter Dedecker and Johan Hofkens, well known for their work on photoswitching, and Robert Campbell, known for his fluorescent sensors, showed a concept similar to our prototype underpinning the general validity of the idea and that it was about time, it was tried. 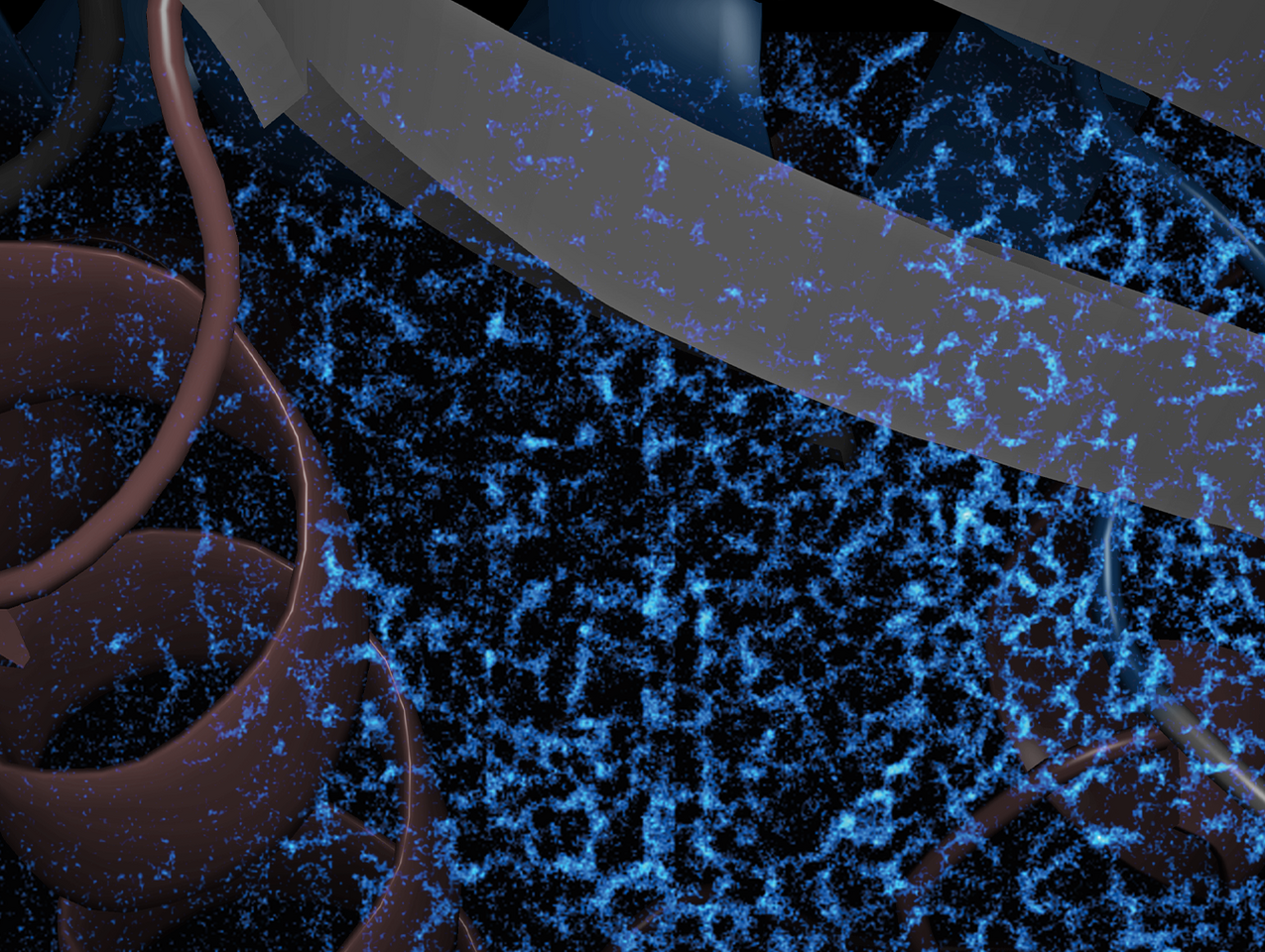 The development of rsGCaMP. Introducing a photoswitchable sensors prototype for super-resolution microscopy and optoacoustic (photoacoustic) imaging.