Here is a bit more about this topic that I collected in my reporting.

What happened to Ettore Majorana

Theoretical physicist Ettore Majorana from the University of Naples disappeared “mysteriously” in 1938. He had studied at the University of Rome with Enrico Fermi who reportedly called Majorana a man of “deep brilliance.” Majorana had, for example, interpreted experiments from the Joliot-Curie lab, led by the French physical chemists Irène Curie and Jean-Frédérick Joliot, about a particle able to enter matter and expel a proton and which they believed to be a photon.

Majorana believed this experimental outcome could only be due to a particle with a mass approximately that of a proton. It was a neutron, a particle with no charge. Fermi reportedly asked Majorana to write the paper, which Majorana didn’t do. In 1932, physicist James Chadwick did experiments with beryllium and discovered the neutron.

Majorana disappeared after a trip at sea. Or during the trip. His body was never found. Some speculate it was suicide, others say he retreated to a monastery, still others say there was a homicide given that some of his work and collaboration with Werner Heisenberg might have advanced a nuclear bomb. His disappearance remains a mystery.

Some of the goings on in quantum computing, notes Sergey Frolov from the University of Pittsburgh in Nature is shaped by a race to find a new type of quantum particle called the Majorana fermion. But it’s elusive, even leading to false starts. There have been retractions of papers that claimed to find these particles.

Frolov initiated one of these retractions. The positive and negative claims of finding the particles have “begun to erode confidence in the basic experimental method of passing current through quantum objects,” even though the technique has been used in many discoveries, including “Nobel-prize winning observations in superconductivity, the quantum Hall effect and tunneling.”

It has also begun to affect Frolov himself, as graduate students express concern he might be halting his own Majorana research. He’s not. He finds such research “viable and important.”

“But, in my view, the key discoveries have yet to be made.” And reliable proof is needed that these particles are indeed their own anti-particles. “Only then will we be ready to develop Majorana quantum computers,” he says.

Majorana’s name is affixed to the Majorana particle, which “in theory” notes Frolov, is a fermion, a kind of elementary particle that is also its own antiparticle.

Experiments that find Majorana fermions involve the experimental challenge of stacking a column of atoms and measuring single electrons running through this column in a magnetic field ten thousand the times of the Earth magnetic field and at one-hundredth of a degree above absolute zero. The search for Majorana fermions has led to challenging and contradictory results. It’s causing confusion in the field of quantum computing, according to Frolov.

Frolov tells me that actually finding Majorana fermions is not going to be directly useful for quantum computing in biomedical research. He says, “I think it is a long shot for quantum computing at this moment, so at least for now this is just something to keep in mind but no need to try to figure it out for those who want to use quantum computers to solve real world problems.”

The achievement is reminiscent of the Wright brothers’ first flights in the way it showed a “new operational regime,” notes MIT researcher William Oliver in Nature in a News & Views about the work by the Google AI team with colleagues in a number of companies and academic institutions, including John Martinis at the University of California, Santa Barbara (UCSB) who was also affiliated with Google AI but has since left. (He joined Silicon Quantum Computing for eight months, then returned to UCSB where he does consulting alongside his independent research.)

The team presented work in Nature accomplished with the Sycamore quantum processor. The processor took 200 seconds for a task related to random number generation that, according to the team, would take a state-of-the-art classical supercomputer around 10,000 years.

It took a while from the invention of flight to routine plane trips for all who want to get somewhere, so too, from what I heard in interviews, it take a while for quantum computers to become widespread.

Quantum computers are not found in every lab, not in smartphones or on desktops, but they do exist and users can for example buy computing time to use them through a cloud. For now it’s more common that physicists than biologists use quantum computing but there is growing interest in the biology community, says Gerstein.

Big tech companies Google, Honeywell, IBM and Microsoft and others are working on a variety of hardware concepts, some of them involve hardware that needs super-cooling, for example. Many smaller companies are developing hardware, too, or hardware components, as well as cloud computing options.

Here is a bit more on the basics of quantum computing. To get you into the quantum though experiment space:

Classical computers work with bits that can take on values of 0 or 1 and those are implemented with electric voltages: a wire can carry a five volt charge to represent a 1 or zero volts to represent a 0. But the theory of classical computing doesn’t depend on particular electrical engineering principles, says Vikram Mulligan. He is a researcher in systems biology at the non-profit Flatiron Institute in New York City.

A computer that runs on steam could represent 1s and 0s with different steam pressures and use valves instead of solid-state transistors to do logical operations a wire-and-transistor computer can do. This steampunky computer “would run slowly, but it would work, and could do anything that an electronic computer does.”

Digital computing works with bits in states of 1 and 0, says Mulligan, with gates that perform logical operations, such as AND, OR or NOT with those bits. More complicated operations such as arithmetic with binary numbers can be built using those basic gates.

The inputs in classical systems are strings of 1s and 0s, followed by logical or arithmetic operations on those 1s and 0s, to produce an output string of 1s and 0s that are interpreted in some way. They might be converted to decimal numbers when doing arithmetic, converted to text or images when working with text or images and there are other outputs for more complicated tasks.

One rule is that objects can exist not only in discrete states such as spin up or spin down for an electron; be horizontally or vertically polarized for a photon; or be alive or dead for the cat in the thought experiment. They can have superpositions of states. That can mean for example 3/4ths spin up and 1/4th spin down. If an object can exist in some combination of two states, those can arbitrarily be called states “0” and “1”.

Another rule is: given a collection of N quantum objects that can each exist in two states, or any mixture thereof, the collection can exist in 2 to the power of N states, or any mixture thereof, says Mulligan. If one cat could be in some combination of being alive and dead, two cats could be (alive, alive), (alive, dead), (dead, alive), and (dead, dead), for a total of four states. You could write those states as 00, 01, 10, and 11.

The third rule, he says, is that when you observe your system, you don't see the superposition of states. “You just see one state,” he says. But the state you see is described by rules of probability: if your cat is 2/3rds alive and 1/3rd dead, you're twice as likely to see a live cat than a dead one.

And the fourth rule is, he says, that before you observe your system, you can do things to it to shift the relative probability of seeing different states. This means that given objects that are described by the laws of quantum mechanics--electrons, photons, theoretical cats in boxes--you can start with an equal superposition of all states and then apply an algorithm, consisting of a series of operations that shift the probabilities of seeing different states.

Since the superposition of states before measurement can be an astronomically large number of states mixed together, and since the quantum operations shift the relative probabilities of every possible state, he says, “quantum computing effectively lets you consider zillions of possibilities simultaneously, and pull out one single possibility of interest.”

Mulligan co-founded a company, Menten AI, that is using quantum computing and other types of computing in drug design. He is fulltime with the Flatiron now.

For the drugs they work on, says Mulligan, the Menten AI teams seek to move beyond traditional small-molecule drugs to peptide therapeutics, which he views as an under-developed but very powerful class of drugs.

In his view, today has similarities with 1950 when primitive vacuum tube-based computers existed but were not widespread. A business might have realized that “someday, every business would do its payroll on a computer,“ he says and started to figure out how to switch over to that technology. But that company would not, in 1950, abandon its army of human ledger-keepers.

That’s how his Menten colleagues view quantum computing: as it continues to develop, they want to figure out how to use this new technology to its full potential but in the meantime they continue to do plenty with classical computers. 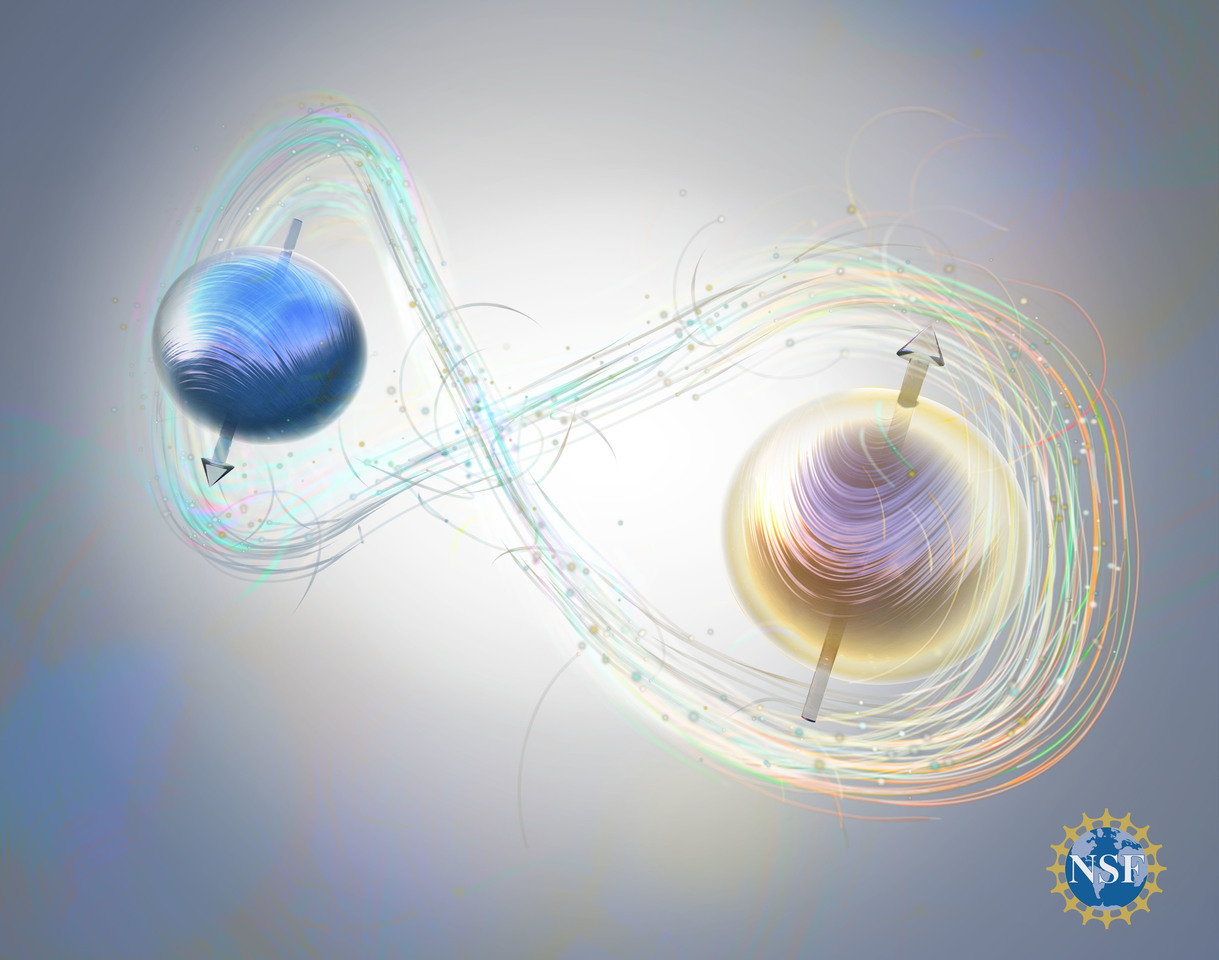 Quantum computing, a mystery, drug design and a steampunky excursion