Mimicking the crowded cytosol of cells in synthetic cells has been a major limitation to the functionality. Here, the authors used the interaction between nickel, nitrilotriacetic acid and histidine tagged proteins to control loading of macromolecules into spatially programmed coacervate-based proto…

Over the last couple of decades, the bottom-up construction of artificial cells has become a hot topic. Our recent contribution to this was the development of a polymer-stabilized coacervate-based protocell platform,1 which provides a unique combination of core-shell properties. The platform showed a lot of promise, however, functional biomolecules could only be loaded if they possessed a negative charge. In order to get reliable protein loading, independent of electrostatics, we needed another type of interaction. We quickly settled on the idea of using Ni-NTA/His-tag affinity chemistry, as it is a well-studied and robust interaction (already used for the lion’s share of recombinant protein purification) that had already been implemented in a different artificial cell system in our group2. It’s a little bit like an exclusive club, with a very strict door policy. Our “invite-only” protein loading strategy works like this: without an invite, the cargo isn’t brought inside the protocell, and has to stay outside at a low concentration. But with the required credentials – a His-tag – the protein is welcomed inside, to a crowded, high concentration environment. (Figure 1, Left)

Figure 1: Left: Cartoon representing the uptake mechanism of proteins into our protocell. Only if proteins have an invitation, His-tag, they are able to enter "The Coacervate Club". Right: One of the first attempts of loading sfGFP-His into the NTA-Am functionalized coacervates, scalebar 10 µm.

The first experiment involved loading His-tagged sfGFP, a positively-charged fluorescent protein that is normally excluded from the coacervate core. This worked well and little optimization was required (Figure 1, Right). We were also able to rapidly characterize the mechanism of loading via the Ni-NTA/His-tag using FRAP – the cargo moves much more slowly when the Ni-NTA/His-tag interaction is in play. For the next step, we wanted to incorporate an enzymatic cascade that was more challenging than the typical Glucose Oxidase (GOx) and Horse Radish Peroxidase (HRP) model cascade, which is ubiquitous in the artificial cell field for its ease of use. We thus searched for a different set of enzymes, preferably ones that cannot deal with extensive chemical modifications to demonstrate the potential of a gentle, general uptake strategy build around Ni-NTA/His interactions. We settled on the cascade for indigo production from tryptophan by using a Tryptophanase and a Monooxygenase. Although the expression and purification were straightforward, we noticed that these enzymes were definitely more finicky than GOx/HRP. The cascade was more sensitive then we initially expected, as trace amounts of organic solvent, especially DMSO, and unexpected temperature dependencies could completely abolish any enzyme activity. Optimization of this cascade took by far the most time of the whole paper. During that time we also considered a couple of other cascades simply because this one was really beginning to frustrate us. In the end it is a good thing we pulled through, as we learnt a lot about how to handle these enzymes in a synthetic setting.

With this system, parameters which were less relevant before, such as the local concentration of small molecules and diffusion of cargo start to play an important role. In this article we explored these parameters, and also were able to implement a cargo release strategy. If we return to our exclusive nightclub analogy, if the bouncer decides the night is over, he could go around to all the partygoers, take their invite and kick them out the door! To do this in reality, we started by engineering a TEV-protease tag between the sfGFP and the His-tag. Our “bouncer” is then a TEV protease, which when introduced to the system removes the “invite”, and initiates the excretion of sfGFP.

This project was challenging, but quite rewarding. We learnt a lot about how to engineer and characterize our system, and now we’re excited to push further, towards protein-based signaling cascades, triggered cargo release and ultimately one can think of in vitro transcription and translation as well.  The strength behind this paper is the combination of researchers with backgrounds in polymer chemistry, biochemistry and molecular biology, and we’re confident that these goals can one day be achieved! We genuinely hope that this inspires others to work with a multidisciplinary team to push this complex field of artificial cells forward and incorporate increasingly complex and lifelike capabilities into synthetic platforms. 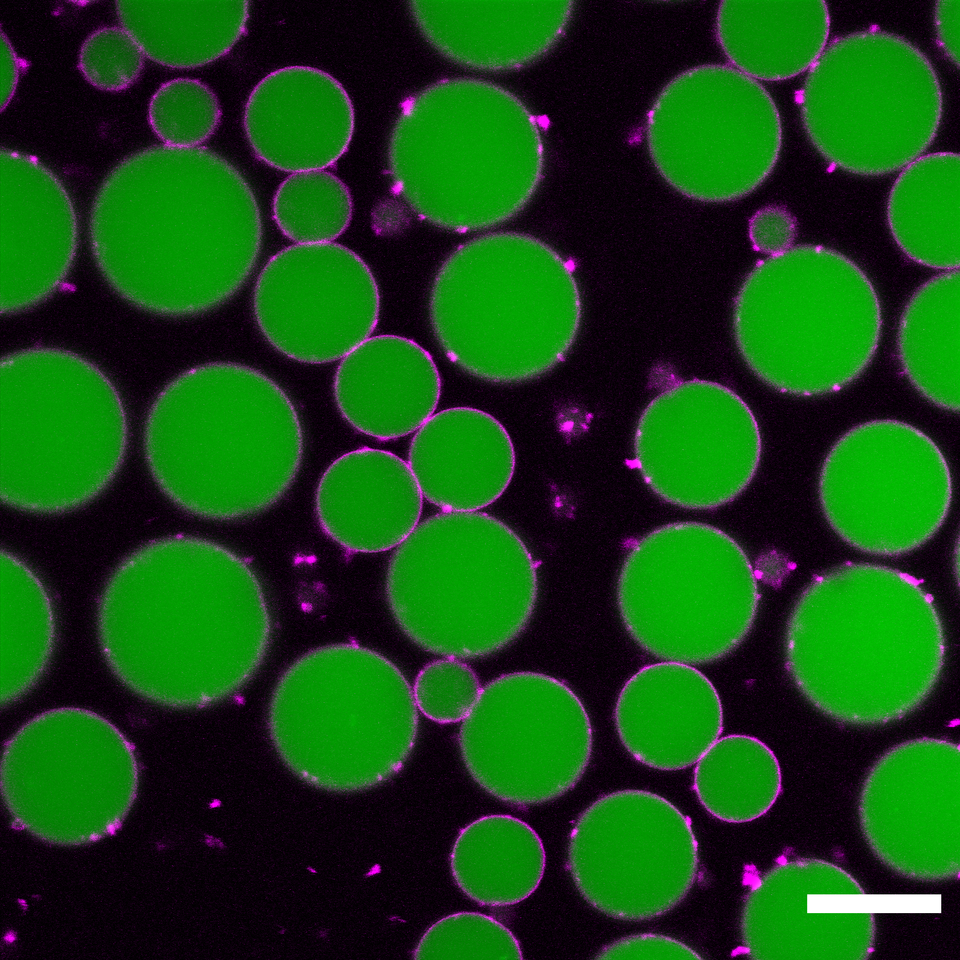