Can we make an antenna so small that it can even fit inside a living cell? What can such a technology enable? Read the blog for answers to these questions.
deblina sarkar and Baju Joy
2 contributors
Like Liked by Evelina Satkevic and 4 others
0

An intracellular antenna that can truly enable probing, modulation or augmentation of biological cells remains an unmet challenge. Here, the authors present the Cell Rover, a magnetostrictive antenna that operates wirelessly inside a living cell and is compatible with 3D biological systems.

Electronics can be designed according to an engineer’s dream to perform user-defined complex functions through integration of sensing, communication and computing. Biological cells, on the other hand, are designed by nature with intricate biomolecular/chemical machineries and form the building blocks of life. Imagine a unique fusion: the cyborg cells, wherein wireless electronics are incorporated inside cells to bring in the prowess of Information Technology into living cells. The key to development of such a fusion is a miniaturized antenna that can fit inside a cell to enable wireless communication, sensing and powering of the computing circuits. Such a technology can lead to unprecedented avenues for extremely precise and autonomous diagnostics and therapeutics with cellular or even sub-cellular resolution. Such cyborg cells can transcend us beyond our biological limitations.

But designing a sub-mm antenna which operates at frequencies safe for living organisms and is compatible with 3D biological systems has remained an unmet challenge. Conventional electromagnetic antennas work on the principle of electromagnetic resonance and need to have sizes comparable to wavelength of transmitted electromagnetic wave to have good radiation efficiencies. This means that sub-mm electromagnetic antennas operate at 100s of GHz or THz frequencies which causes adverse heating effects in living systems. Additionally, such antennas have very low efficiencies due to ohmic losses. Current research towards the development of such an antenna has been focused on the use of near field inductively coupled antennas which still operate at high frequencies (10s of GHz) harmful for living systems and have a poor detection range (Range/Effective Size of Antenna =1). We have adopted a different approach to address these challenges by developing a sub-mm magnetostrictive antenna capable of wireless operation in a living cell, operates in the low MHz frequency range and is compatible with 3D biological systems. We call these antennas which can be used for exploring and augmenting the intracellular environment, the Cell Rovers (Fig. 1).

To test this idea, we developed antennas based on magnetostrictive material Metglas 2826 MB due to its high efficiency of conversion of magnetic energy to strain energy and easy availability. We fabricated antennas of dimensions ranging from 400 um x 200 um x 28 um to 600 um x 200 um x 28 um by Micromachining using either a Laser or Diesaw. Even though both methods produced antennas of identical characteristics, Diesaw fabrication enables high throughput fabrication of the antennas, whereas laser micromachining offers much more freedom in the antenna design. Following fabrication, the antennas were characterized in air and then in water to mimic operation in the cytoplasm of a cell, using a custom designed coil setup. We found that Cell Rovers of 500 um x 200 um x 28 um have an operating frequency of 4.5 MHz, 3 orders of magnitude smaller than similar sized near field electromagnetic antennas. They also provide a good signal to noise ratio (SNR) of 19.5 dB even at a detection range of 1.0 cm (Range/Effective Size of Antenna=28.0), making it promising for 3D biological systems. While our coil design here is focused on in vitro operation, different coil design strategies can be employed for in vivo operation of the Rovers deep in the tissue.

Xenopus Oocytes as the Testbed

Next, we proceeded to test the operation of Cell Rovers in a living cell. For this we chose oocyte cells from the South African clawed frog Xenopus Laevis, which are extensively used for studying developmental biology, in-vitro fertilization, drug discovery and genetic engineering. These cells have been used either to study fundamental processes involved in the development and division of cells or alternatively as a “living test tube” since exogenous mRNA or DNA can be injected into its cytoplasm or nucleus respectively leading to the expression and trafficking of corresponding proteins. The latter approach can be used to study any gene of interest. In these studies, to sense different biomolecules of interest researchers mainly rely on methods such as Western Blotting and immunofluorescence assays which involve destruction of the cells and hence cannot be conducted in real time. Also, fluorescence imaging is difficult to perform in live Xenopus oocytes due to their large size (about 1.2 mm in diameter) and autofluorescence from yolk platelets in the cytoplasm. Cell Rovers could overcome these difficulties and could help in accelerating these studies by enabling real time, wireless sensing of different biomolecules in Xenopus oocytes. In addition, due to the large detection range, Cell Rovers could also be detected from inside living Xenopus animals and thereby enable the study of Xenopus oocyte cells in vivo.

Fig. 2. Injection of Cell Rovers into Xenopus oocytes by application of an optimum magnetic field gradient.

To achieve this, we first developed a novel injection scheme using a non-uniform magnetic field to inject Cell Rovers into Xenopus oocytes. An optimum gradient magnetic field was used after inserting the antennas into the cell membrane to ensure smooth injection of the antennas into the cell (Fig. 2). The viability of the cells injected with the antennas was then studied by observing the appearance of the two hemispheres of the cell using optical imaging and their viability was found to be similar to control cells without antennas. Following injection, the antennas were wirelessly detected from inside the cell and the response was found to be similar to that in water (Fig. 3a, 3b, 3c). Cell Rovers of different sizes and hence slightly different resonance frequencies could also be detected simultaneously from the same or different oocytes which shows that they can be used for multiplexing in cells (Fig. 3d, 3e). By recording the resonator response over time from inside the cell we also demonstrated the feasibility of Cell Rovers for real time monitoring and sensing operations. We also discuss further miniaturization of Cell Rovers using conventional microfabrication techniques by simulating the response from a 25 um x 25 um x 5 um magnetostrictive antenna which gave an R/D (Range/Effective Size of Antenna) value of 20.0, showing the feasibility for extending this technology for smaller cells.

Fig. 3. a Schematic diagram of the setup for wireless detection of Cell Rovers and the detected b amplitude and c phase as a function of frequency for operation in cell cytoplasm and water. d Schematic diagram showing multiple resonators injected in the same Xenopus oocyte and the detected e signal amplitude as a function of frequency.

The Cell Rover provides a modular platform with possibility of integration of a multitude of functionalities for enabling different applications as discussed below.

Sensing: The Rovers can be used for intracellular monitoring and quantitative real time detection of different entities such as ions (H+, Na+, K+, Cl- etc), biomolecules (such as proteins, RNA, DNA, lipids) as well as physical parameters (such as intracellular pressure, temperature). This would be achieved by functionalizing the Rovers with reporters which cause a change in mass or stress in response to a change in the targeted entity of interest thereby changing the resonance frequency of the antenna. This technology can enable intracellular sensing in vivo due to its large detection range and excellent tissue penetration of low frequency magnetic fields. This along with its ability for real time monitoring, can overcome the challenges of existing technologies which require destruction of the cells and analysis of the cytoplasm to obtain time dependent data, specifically in optically opaque settings. Thus, Cell Rovers can lead to fundamental insights into biology and is also highly promising for drug discovery.

Stimulation: By integrating a piezoelectric layer onto the magnetostrictive layer the magnetic fields can be converted to electric fields which can in turn achieve electrical stimulation of cells. Electrical stimulation can influence the intracellular microenvironment and intracellular pathways, and can thereby modulate processes such as cell proliferation, differentiation, tissue repair.

Augmentation: The intracellular antenna can wirelessly harvest power from external magnetic fields, which can be used to power nanoelectronic circuits integrated onto the Rover. Such circuits can enable in-cell computing for autonomous functionalities such as analysis of the sensor data and feedback-based control of cell environment and functions. The computed and analyzed data can also be communicated to a system outside the body or stored in an integrated memory within the Rover for future reference or communicated to Rovers in other cells for a cell-network level autonomous decision. This can create unprecedented opportunities for novel diagnostics and therapeutics as well as can extend biological functionalities by infusing the versatility of information technology at the cellular scale. Beyond healthcare, this fusion of electronics and cells can lead to unique living electronic robots, combining best attributes of both worlds, with versatile sensing and intervention capabilities (electro-magnetic-acoustic-optical as well as bio-chemical), with vast applications in environment, ocean and space monitoring and cleaning.

Note - Image credits for the poster image: Irakli Zurabishvili with models by IronWeber and Lauri Purhonen. 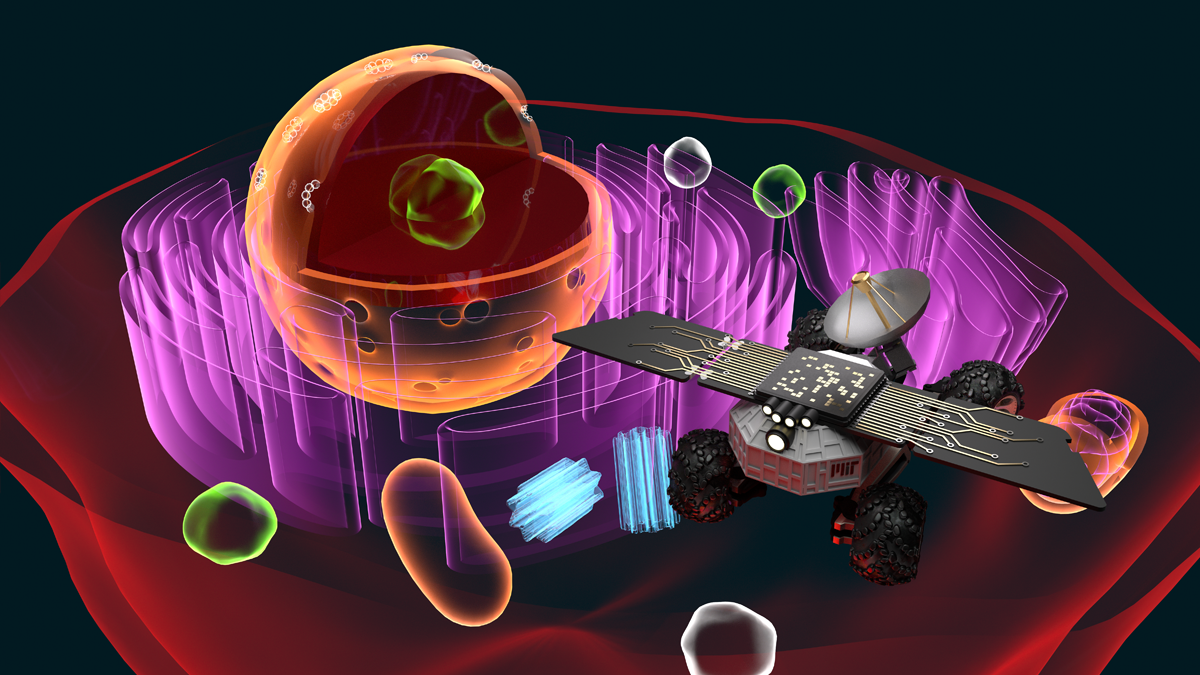 Can we make an antenna so small that it can even fit inside a living cell? What can such a technology enable? Read the blog for answers to these questions.