We developed a new type of MOFs-based core-shell nanoagents that enables near infrared (NIR) light-triggered two distinct antitumor mechanisms, namely oxidative stress and calcium overload, with both of them contributing to the mitochondria-dysfunction-associated eradication of tumor cells.

Multiple-approach-involved antitumor strategies, especially those with synergistic effects, hold great potential for addressing the long-standing issues that traditional strategies generally encounter. Owing to the vital physiological roles of mitochondria, strategies capable of activating multilevel mitochondrial damage pathways via pinpoint spatiotemporal control are particularly promising for antitumor therapy with desired precision and enhanced therapeutic index. Recently, we developed a new type of metal-organic frameworks (MOFs)-based nanoagent (denoted as FMUP hereafter) that enables near infrared (NIR) light-triggered two distinct antitumor mechanisms, namely oxidative stress and calcium overload, with both of them contributing to the mitochondria-dysfunction-associated eradication of tumor cells. Through this behind the paper post, I will spotlight the challenge-oriented design of FMUP involved in this research and its salient features.

As an emerging tumor microenvironment-assisted antitumor strategy, chemodynamic therapy (CDT) has attracted a great deal of attention owing to its superiority in terms of the underlying action mechanism. Specifically, CDT is based on the Fenton reaction (Fe2+ + H2O2 → Fe3+ + •OH + OH−) or Fenton-like reaction capable of generating lethal hydroxyl radicals (•OH) to kill cancer cells. Fenton reaction can be facilitated in the mitochondrial microenvironment due to the upregulated level of H2O2 species therein, which is expected to enable site-specific attack of mitochondria in antitumor therapy. Additionally, as the crucial enabling species in CDT, •OH is characterized with much stronger oxidative stress and therefore potency for inducing mitochondrial damage than its counterpart involved in photodynamic therapy (PDT), namely, 1O2. It also deserves mentioning that the mechanism of CDT using H2O2 as the substrate circumvents the intrinsic impediments originating from the tumor hypoxia that PDT typically encounters.

Although CDT holds great promise for antitumor therapy based on the abovementioned superiority, several major impediments need to be overcome for enabling it practicality. Firstly, the Fenton reaction prefers an acidic environment, with an optimal reaction pH ranging from 2.0 to 5.0, while the intracellular pH of tumor predominantly exhibits ~ 7.4, which is not acidic enough to enable an efficient Fenton reaction and the accumulation of sufficient •OH for efficient CDT. Secondly, Fe2+ is typically more productive in generating •OH via the Fenton reaction but more unstable than Fe3+, which makes efficient delivery of the productive Fe2+ into the tumor cytoplasm and the on-demand release of sufficient Fe2+ in situ remain a challenge. Moreover, the simultaneous administration of Fenton reaction and other approaches with different underlying pathways for multiple-approach-involved antitumor therapeutics is also challenging.

We sought to address the abovementioned challenges based on brainstorming nanoagent design in this work. Fe (Ⅲ) typically undergoes a ultraviolet (UV) light-mediated reduction reaction and consequently generates Fe (Ⅱ) based on a photochemically induced electron transfer process, which provides an opportunity to deliver the stable Fe3+ species to the target sites and controllably release the productive Fe2+ species in-situ for Fenton reaction via light triggering. On the other hand, some photoacid generator moieties typically undergo UV light-catalyzed photochemical reaction and therefore release H+, which presents the feasibility for acidifying the target microenvironment and therefore facilitating Fenton reactions. It is noted that the abovementioned Fe3+-to-Fe2+ reduction and photoacidification are triggered by UV light, which is vulnerable to scattering and absorption caused by optically turbid tissues and therefore suffers from limited penetration depth. It is known that many biological issues reach the maximum optical transparency and greatly attenuated light scattering in the biological window (~700−1000 nm), indicating photoactivatable agents with triggering light in the NIR region are intrinsically capable of circumventing the abovementioned obstacles. The upconversion nanoparticles (UCNPs) capable of converting NIR light to UV light are ideal candidates for addressing such a challenge.

Such dual-mitochondria-damage capacity of MOFs-based nanoagent is derived from the full exploitation of functional components in FMUP. Specifically, the UCNPs-enabled NIR light-triggering mode permits the controlled action of the FMUP in the deep tissue-penetrable optical window. The manner of simultaneously phototriggering dual mitochondrial damage imparts the spatial-temporal consistency of actions, which is beneficial to boosting the therapeutic efficacy. Of particular note is that the Fenton reaction is synergistically reinforced based on triple enabling factors, namely the upregulated H2O2 species in mitochondria, the NIR light-mediated in situ release of Fe2+ and photoacidification of microenvironment, which markedly strengthens the intratumoral oxidative stress. Additionally, photoacidification is involved in both Fenton reaction and calcium overload, enabling a simultaneous administration of two anticancer modalities with quiet distinct cellular mechanisms jointly dictating mitochondria dysfunction and therefore tumor cell death, a one-stone-two-birds protocol for triggering the antitumor action. Moreover, the fact that the upregulated H2O2 in mitochondria acting as the endogenous stimulator for triggering Fenton reactions is expected to confine the range of action locally to the targets and therefore present antitumor capabilities with the desired specificity.

In addition to the validation of the cytotoxicity of FMUP in various tumor cell lines and cell derived tumor xenograft (CDX) models, the in vivo experiments in patient derived tumor xenograft (PDX) models unequivocally indicated that a single administration of FMUP with twice irradiation of 980-nm light could completely suppress the tumor development, proclaiming its potential as a safe and potent antitumor agent based on efficiently amplified mitochondrial damage.

To the best of our knowledge, this is the first paradigm where a photoacid generator moiety incorporated in MOFs nanostructure enabling NIR light-triggered dual damage to mitochondria with the involvement of oxidative stress and calcium overload based on the intratumoral photoacidification process. This proof-of-concept implementation opens up a way of exploring optically manipulating intracellular acidity/alkalinity for synergistic antitumor therapeutics with enhanced precision and anticancer efficacy. Crucial to such exciting result of research was an interdisciplinary close collaboration between three research teams with expertise in photoactive functional materials (Prof. Zhiyuan Tian’s team), biomedical engineering (Prof. Wei Wei and Prof. Guanghui Ma’s team) and clinical medicine (Prof. Yugang Wang’s team), respectively. 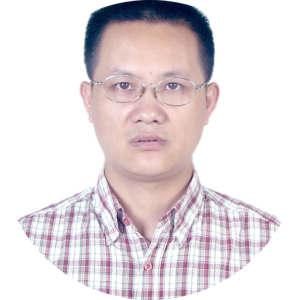 Our research group is interested in photoactive functional materials and their potential applications. Specifically, we focus on the design and synthesis of functional materials with stimuli-response features to light and their potential applications in biological imaging (super-resolution fluorescence imaging and multimodality correlative imaging), biological optical detection (mapping of tumor markers) and therapy (photoactivated synergistic antitumor with multilevel mechanisms) and etc.