Streptomyces are an important filamentous bacterium genus in industry, but most of the high-throughput techniques so far can only separate spores or protoplasts. Tu et al. develop an encapsulating method that allows screening of Streptomyces in the filamentous, stationary phase.

In our recent paper published on Communications Biology, we successfully established a droplet-based microfluidic platform for high-throughput screening of Streptomyces, and demonstrated its application potential in the engineering of expression regulatory elements and the screening of secretory-protein high producers. We pointed out that the key advantage of this method was that the encapsulated mycelia in droplets were better simulation of filamentous Streptomyces in stationary phase which were commonly used in industrial setting. Therefore, this platform is more reliable and the resultant strains will be more industrially relevant (https://www.nature.com/articles/s42003-021-02186-y).

Filamentous microorganisms are a collection of species that are featured with long and branched hypha in morphology, such as fungi and actinomycetes. Many filamentous microorganisms are industrially important strains for their capacities to produce proteins and natural products of interests, among which many are secondary metabolites that produced after at least 5-day cultivation. Thus, the long-term stability of filamentous microorganism-containing droplets is a necessity when the droplet-based microfluidic platform is applied. In recent years, our lab has applied fluorescence-activated droplet sorting (FADS) technology in the screening of different filamentous microorganisms, including fungi, such as Trichoderma reesei and Aspergillus niger, and Streptomyces, such as S. lividans 66 and S. coelicolor M145. Interestingly, although both fungi and Streptomyces are filamentous microorganisms and shared many similarities in morphology, differentiation and even ecological niche [1], their droplet stabilities are totally different. The fungi-containing droplets could not maintain their stability for one day since the robust hypha would puncture the droplets and release their content within 24 hours. We observed the germination of Aspergillus niger and Trichoderma reesei, and found that the droplets were punctured at 12 h and 16 h, respectively (Fig. 1). It means that the sorting should be performed earlier to guarantee the stability of fungi-containing droplets. However, early sorting time is not the real reflection of industrial fermentation setting. For example, Trichoderma reesei is a common cellulase producer, which is usually fermented for five to seven days for cellulase production [2, 3]. We also tested several Streptomyces species including two model strains, S. lividans 66 and S. coelicolor M145, and concluded that the Streptomyces-containing droplets could maintain their stabilities at least after 7-d cultivation (Fig. 1), which was generally an appropriate time to analyze secondary metabolites. In fact, we have observed that the Streptomyces-containing droplets were stable even after one month at 30℃, when the mycelium was almost autolysed. We speculated that the strikingly different long-term stabilities of droplets between fungi and Streptomyces might result from the different structures of their hypha. Streptomyces mycelium has a mean diameter of 0.7 μm [4], generally smaller than filamentous fungi [5], whose hypha are 3-6 μm in diameter [6]. Besides, the major constituent of Streptomyces cell wall is peptidoglycan [7], while fungal cell wall is supported by fibrous and gel-like carbohydrate polymers, and embedded with a variety of matrix components, which is flexible but strong [8]. Because of these factors, Streptomyces mycelia are soft while fungal hypha are robust, which may lead to different long-term stabilities of their droplets.

The long-term stability of Streptomyces in droplets ensures that we have more options in terms of choosing screening time point during the whole life cycle of Streptomyces, which may vary depending on the targets such as regulatory parts, proteins and metabolites. Moreover, we believe that our droplet-based microfluidic platform may be compatible with almost all filamentous microorganisms featured with soft hypha, including but not limited to actinomyces, among which many species are the producers of value-added natural products. That being said, it doesn’t mean filamentous microorganisms with robust hypha would never be compatible with droplet-based microfluidic platform in the era of synthetic biology. With the help of advancing basic research of microorganism morphology on molecular level, rationally tailoring microorganism morphology to suit our need may just within our reach. 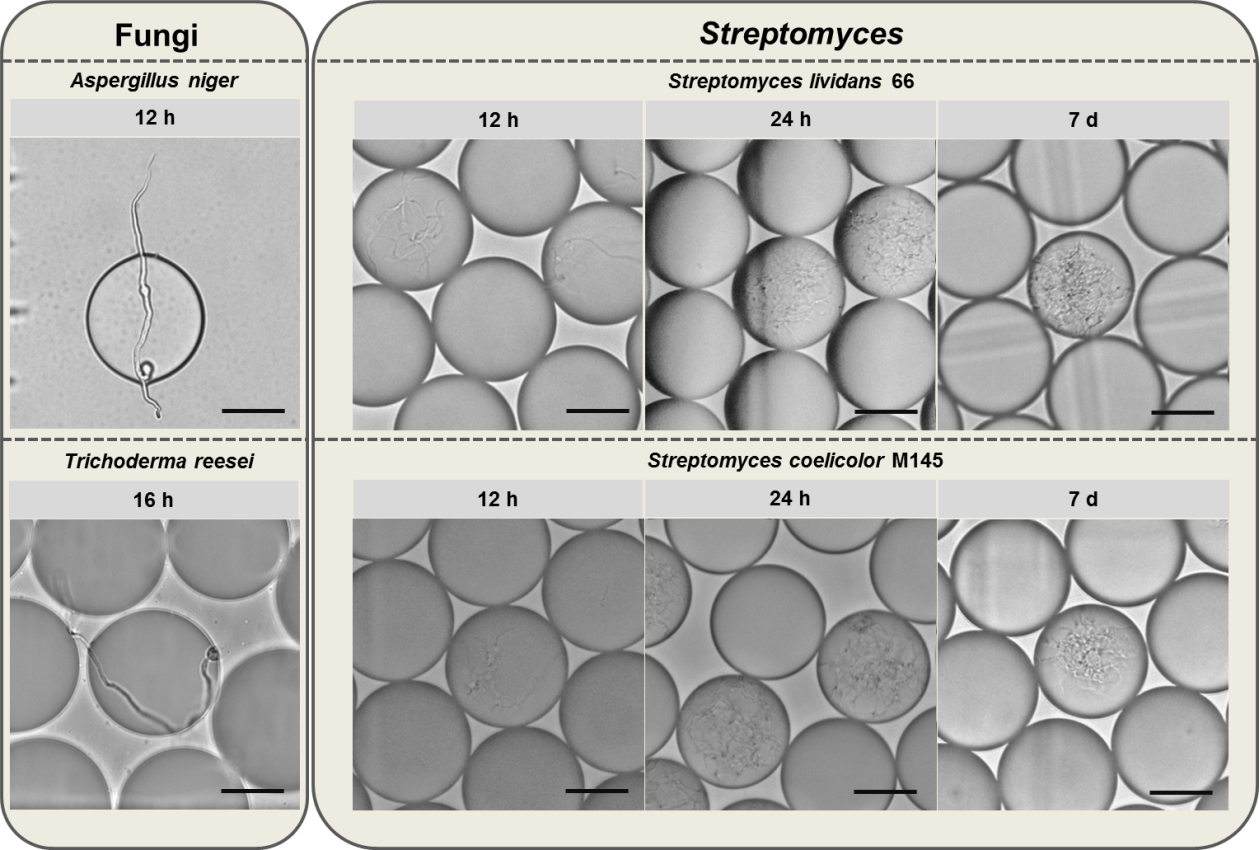