Tympanometry is a test used to evaluate the health of the middle ear. However, the test currently requires expensive equipment ($2000-$5000) and is limited in resource-constrained settings. We present an open-source tympanometer design that uses smartphones which are ubiquitous across the world.
Justin Chan and Shyam Gollakota
2 contributors
Like Liked by Evelina Satkevic

Chan et al. develop an open-source smartphone-based tympanometer to evaluate middle ear function. The authors test their device in a group of paediatric patients at an audiology clinic and report a high level of agreement in audiologists’ classification of tympanograms produced using this device com…

Middle ear disorders are one of the most common causes of preventable hearing loss. Unfortunately, while the developing world bears a disproportionate burden of these disorders, it often lacks access to diagnostic tools.

Tympanometry is a key test to measure middle ear function, but remains available only on expensive test equipment that costs $2000-$5000. In countries like Kenya where hearing screening programs are less developed, hospitals often have to rely on a very small number of tympanometers donated by non-profit foundations like Hear the World. However, these hospitals still remain strained on resources, and have to serve patients who travel from as far as a nine-hour drive away for hearing screenings.

Another problem faced by medical humanitarian groups like Doctors without Borders is that they often only have access to bulky, desktop-bound tympanometers which are inconvenient to transport. Furthermore, these devices require a wall outlet for power, and are not designed to work in the event of electrical failures which occur with greater frequency in developing countries.

In this work, we introduce open-source algorithms and hardware for smartphone-based tympanometer that consists of a lightweight and portable attachment to measure middle ear function and algorithms running on the smartphone as well as the attachment. We leverage the fact that budget smartphones that cost $40–50 second-hand contain powerful processors to perform computing, user interfaces and high-resolution displays, and are thus able to support many of the operations that existing tympanometers are able to do at a lower price point.

The handheld attachment holds all electronics in an enclosure and snaps to the back of a smartphone, which makes it suitable for use in mobile health clinics or as part of medical humanitarian trips. We have open-sourced the hardware schematics and algorithms making it free and accessible for further adaptation (https://github.com/uw-x/tymp).

At the heart of the smartphone attachment is a pressure transducer made from a stepper motor designed to move the plunger of a syringe carefully at sub-millimeter precision. The motor is connected through a series of pipes to an eartip that is placed in the ear canal – similar to an in-ear headphone. The motor is set to move the eardrum gently by performing a pressure sweep from -400 to 200 daPa. Our system is designed with safety in mind and uses a pressure sensor to ensure pressure in the ear only remains within these bounds. The device is also easy to use and can automatically detect when the eartip has obtained a seal with the ear canal and begin the pressure sweep.

During this pressure sweep, the attachment sends an acoustic tone into the ear canal and records the amount of sound reflected back from the ear canal. This sound recording can be converted into a chart known as a tympanogram that quantifies the mobility of the eardrum.

In a healthy patient, an increase in positive and negative pressure tenses the eardrum and makes it more stiff, which causes an increase in reflected sound energy. In contrast, ears with middle ear fluid may have a stiff eardrum and the amount of reflected sound energy at different pressure levels may not have a pronounced peak. The entire measurement is designed to be completed within a few seconds, and has been tested clinically in patients as young as 1 year of age.

We conducted a clinical study on 50 pediatric ears at Seattle Children’s Hospital from patients aged 1 to 20 years old. In this study, patients were tested with our smartphone-based device in parallel with a commercial clinic-grade tympanometer. We specifically targeted patients with a variety of middle ear disorders including patients with ear tubes, eardrum perforations, otosclerosis, and negative middle ear pressure. Our system showed good agreement with the clinic-device on quantitative metrics used to characterize the shape of the tympanogram: peak admittance, ear canal volume, and peak pressure. Furthermore, a panel of pediatric audiologists classified the tympanograms from our device and the commercial tympanometer into five clinically relevant classes with an agreement of 86%.

Given the accessibility and prevalence of budget smartphones in developing countries, our system may help provide increased access to affordable screening of middle ear disorders, resulting in more timely referrals to specialists. We open-source our hardware and software making our system free and accessible to use and further adapt.

Check out our Communications Medicine paper and open-source project for more details. 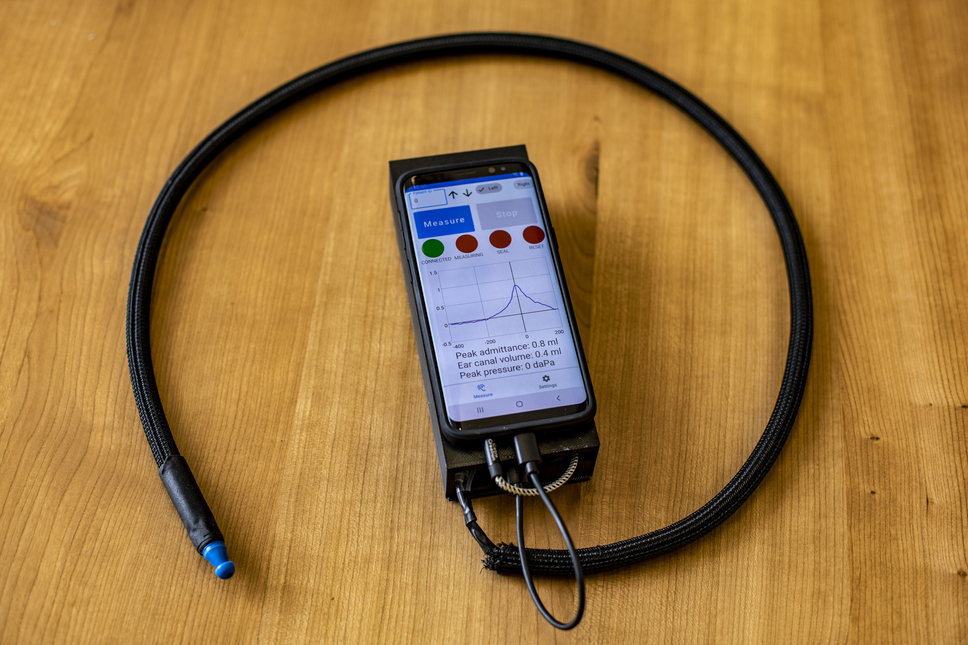 Tympanometry is a test used to evaluate the health of the middle ear. However, the test currently requires expensive equipment ($2000-$5000) and is limited in resource-constrained settings. We present an open-source tympanometer design that uses smartphones which are ubiquitous across the world.