Reunion of functional molecules can be used to detect protein-protein interaction. For example, GFP-dependent Cre recombinase was created by using GFP-specific nanobodies fused with split-Cre. Here we showed that the same strategy can be used to create RFP-dependent Cre recombinase.
Ayumu Inutsuka
Assistant Professor, Jichi Medical University
Follow
Like Liked by Amy Mundye
0

A Cre recombinase dependent on red fluorescent protein (RFP) is generated, which expands the repertory of nanobody-based genetic tools by enabling selective targeting of RFP-dependent gene expression in the mouse and rat brain.

Recent great advances in neuroscience rely on the regulation of gene expression in specific cells. Tracing specific neuronal connections within the brain, optical imaging of genetically encoded fluorescent sensors, and optogenetics to manipulate neuronal activity in moving animals: all of them are dependent on the sophisticated regulation of gene expression in specific cells. In model animals such as mouse, Cre-loxP systems are highly prepared. Various gene-specific promoter-driven Cre mouse lines are now available for genetic access to subpopulations of cells in the brain. However, it is still difficult to create transgenic large animals including primates, and the most sophisticated genetic techniques used in mice cannot be transferred to human beings. Therefore, it is important to achieve specific gene expression control technology using viral vectors without using transgenic lines.

Nanobodies are commonly used for detection of target proteins by their very specific binding ability. They consist of a single peptide that recapitulates only the antigen binding site of the antibody molecule. The small size of nanobodies makes them ideal for integration into adeno-associated virus (AAV) vectors, which have strict genome size limitations. Recently, several methods have been developed to regulate gene expression using the target protein-specific binding properties of nanobodies. Among them, the method using split-Cre recombinase is very convenient because it can utilize existing Cre-dependent viral vectors. However, since the report of Cre recombinase dependent on GFP: Cre-DOG1, which targets GFP as its target protein, there have been no attempts to expand its target proteins.

Here, we created RFP-dependent Cre recombinases (Cre recombinase dependent on RFP: Cre-DOR) by utilizing Split-Cre reunion via specific binding of nanobodies to red fluorescent proteins (RFPs). First, eight mCherry binding proteins (MBPs) including six nanobodies and two DARPins (Designed Ankyrin Repeat Proteins) that bind specifically to mCherry were fused to the N- and C-terminal fragments of Split-Cre. Luciferase assays were then performed on 8 x 8 = 64 combinations of these 8 NCre-MBPs and 8 CCre-MBPs to find the best pair with the highest Cre recombinase activity. In experiments using GFP as a reporter of Cre-DOR recombination activity, we achieved RFP-dependent regulation of gene expression using Cre-DOR with 95% specificity in mRFP1-expressing neurons in the mouse brain. Finally, we found that local administration of Cre-DOR and reporter GFP-expressing virus vectors in Grpr-mRFP1 rats visualized the specific neural pathway from Grpr-expressing neurons in the posterodorsal medial amygdala (MePD) to the posterior bed nucleus of the stria terminalis (BSTp).

A, In this work, we created Cre dependent on RFP (Cre-DOR) by combining RFP-specific nanobodies and split-Cre. Specific binding of the nanobodies to RFP induces reunion of split-Cre into functional Cre recombinase. B, Local injection of virus vectors of Cre-DOR achieved specific expression of reporter palGFP in RFP-positive neurons in Grpr-mRFP1 transgenic rats. C, We revealed novel neural projections using Cre-DOR virus in RFP-expressing transgenic animals.

Reunion of inactive protein fragments by nanobody binding is not limited to Cre recombinase. For example, it has been reported that the molecular topology of CD38 in the cell membrane can be assessed by using nanobodies that bind specifically to CD38 and split-luciferase2. Such Luc-DOX (Luciferase dependent on Protein X) will have the advantage of being able to detect membrane proteins localized at the plasma membrane and is expected to be powerful for the analysis of physiologically important molecules such as GPCRs and ion channels. A luciferase that emits near-infrared light and can be detected even in the deep brain has been reported3. Luc-DOX may enable non-invasive detection of specific target proteins in living animals including primates. Considering that machine learning using only structural information of a target protein can produce specific small-sized binding proteins, it is now very exciting to design a genetic system such as Cre-DOX or Luc-DOX. 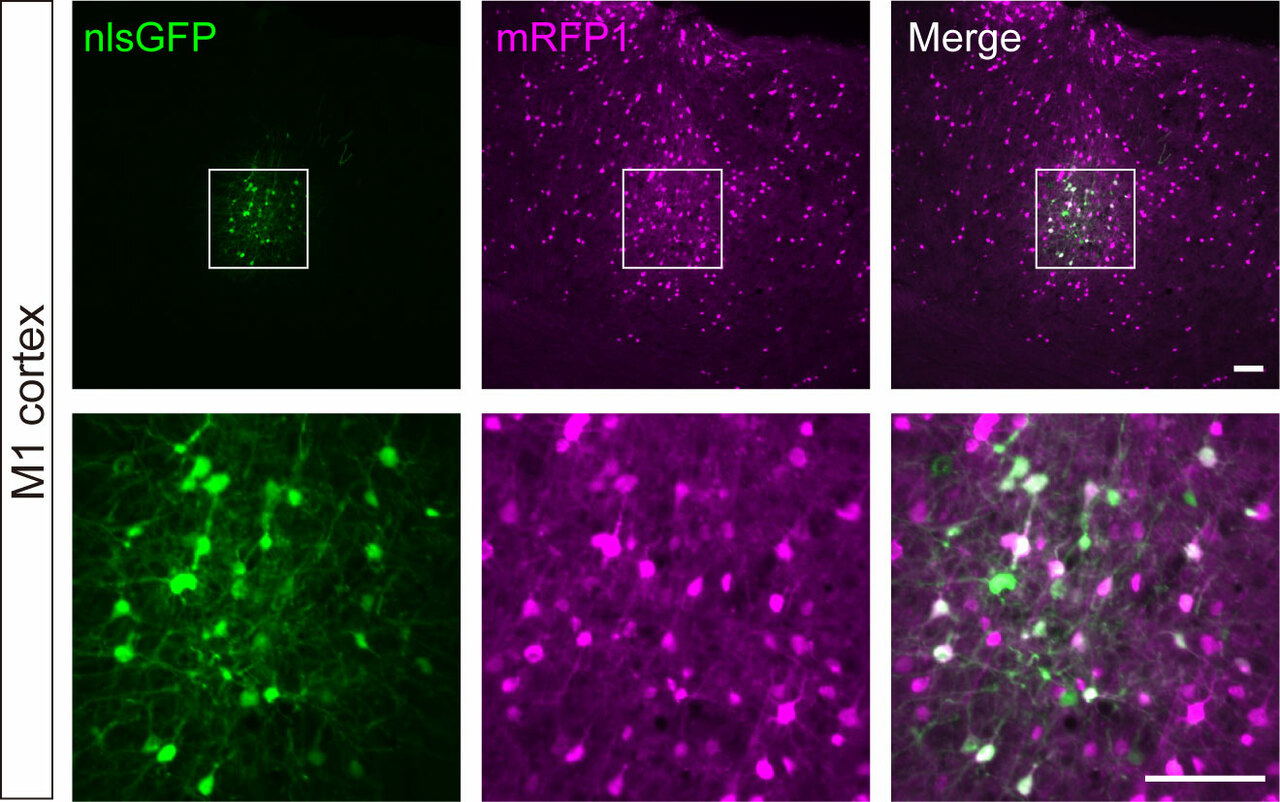