Gene therapy comes of age. Genome editing has witnessed the developments of various genome editing tools for the last two decades. CRISPR tremendously contributed to the improvements of such tools. Now, we came to another phase; the application of CRISPR tools to gene therapy. The Cas12f-ge would play a pivotal role in the gene therapy era.

"Big things come in small packages" is a proverb challenging our cognitive bias that the bigger, the powerful. The battle of "David and Goliath" in the Bible best illustrates this notion. However, more often than not, good things or big things come in small packages. When Un1Cas14 was first introduced by the Jennifer group [1], most people would think that the origin-unidentified Cas is too small to have double-stranded DNA break activity. This bias was reinforced by the experimental evidence that the Cas12f1 system only showed ssDNA cleavages. With a skepticism in mind, we tried out testing whether an addition of a 3'-U-rich tail to the crRNA, as previously applied to the CRISPR-Cas12a system [2], would affect the cleavage behavior of Cas12f1. Surprisingly, Cas12f1 showed indel efficiency (~1%) in HEK293T cells when guided by the first engineered U-rich gRNA form.

For a second round of engineering, we pinpointed  a unsuitable sequence of canonical tracrRNA for eukaryotic transcription; A penta-uridinylate sequence (UUUUU) was concealed in the canonical tracrRNA, whose template sequence (TTTTT) is a termination signal. We substituted the U-rich sequence with an empirically optimized one. It was such an ironical but interesting feature that the U-rich sequences were pros and cons at crRNA and tracrRNA, respectively.  Further gRNA engineering efforts were made by trimming inessential stem regions.  We did not know why deletion of some stem regions of gRNA improved indel efficiency during our early phase of engineering. But the publications of structural studies [3, 4] revealed that the trimmed regions were structurally disordered and maybe dispensable for Cas binding. Cas12f1 forms a homo-dimer either in the presence or absence of gRNA. However, it is likely that a stable homo-dimeric formation of Cas12f occurs when the disordered regions are cut away.

Besides the advantages of small size of Cas12f1, the engineered Cas12f1 has a unique feature in the DNA cleavage. It cleaves outside the protospacer region, which supports multiple and persistent rounds of dsDNA cleavage-NHEJ pathway. The cleavage property is an ace in the hole for a large DNA deletion strategy where a pair of gRNAs are used to eradicate a pathogenic DNA region. Moreover, the engineered Cas12f1 is a pair of "lucky breaks" for genome editing applications because of its high specificity. With these multifaceted merits, the gRNA engineered Cas12f1 (Cas12f_GE) system is expected to be a game changer in the development of gene therapy through AAV-aided CRISPR delivery . 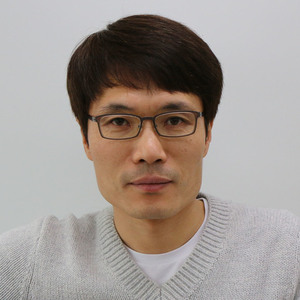