The ability to control the subcellular location of proteins is key to control in synthetic biology systems. We developed a peptide-based molecular switch that regulates dimer formation and lipid membrane targeting via reversible phosphorylation.
Leon Harrington
Post-doctoral research fellow, Max Planck Institute of Biochemistry
Follow
Like

The ability to dynamically control protein-protein interactions and localization of proteins is critical in synthetic biological systems. Here the authors develop a peptide-based molecular switch that regulates dimer formation and lipid membrane targeting via reversible phosphorylation.

Bottom-up synthetic biology has the ambitious goal of constructing systems that recapitulate the fundamental characteristics of life from basic molecular building blocks. One aspect of this is to construct minimal synthetic cells, or ‘proto-cells’. Achieving such a goal will require a broad palette of both natural and synthetic molecular components to be designed and curated.

Protein engineering and de novo protein design will play important roles in the construction of artificial cells. Significant improvements in our understanding of design principles, computational methods, experimental throughput and cost-reduction mean that artificial protein folds, structures and assemblies can be made with a reasonable degree of predictability. These are, however, static structures, whereas life is anything but static.

To build an artificial cell, the constituent building blocks must be able to organise themselves dynamically and spatially in order to truly recapitulate basic living functions. Tools that allow the introduction of reversible and dynamic processes are therefore critical to realising this goal.

The Schwille lab at the Max Planck Institute of Biochemistry in Martinsried, Germany, has for some time been fascinated with the E. coli Min system – a beguilingly simple protein-based system capable of self-organisation and pattern formation. In E. coli, the Min system establishes standing waves of protein that dynamically position the cell division machinery at the mid-cell. The Schwille lab had previously discovered in a seminal study that two key proteins from the Min system establish striking travelling waves and other patterns when reconstituted on artificial lipid membranes with an energy source.

When I joined the Schwille lab as a post-doctoral fellow, I was immediately struck by the way complex dynamic processes could arise from seemingly simple underlying mechanisms. In particular, a key mechanism of the E. coli Min system is that the MinD protein shuttles between a membrane-bound dimer form and a solution-localised monomer form, a process that is driven by nucleotide hydrolysis. This ‘membrane switch’ is particularly clever because it makes use of the avidity arising from the combination of two individually very weak membrane-targeting peptides in a dimer to achieve strong membrane binding.

Inspired by the Min system, I set out to mimic these mechanisms by stitching together minimal protein domains as ‘modules’ in artificial fusion proteins that could switch between a membrane-bound heterodimer and solution-localised monomers. Instead of using nucleotide hydrolysis to drive the switch, I proposed to use reversible protein phosphorylation, a process that frequently controls protein-protein interactions in nature. However, I found recombinant protein production to be a bottleneck to the design and testing process. Further, my efforts were frequently confounded by aggregation and non-specific interactions. Faced with these setbacks, I began to ask – was our minimal system minimal enough?

An idle thought during a talk at the Mosbach Colloquium in Germany followed by a discussion with Dek Woolfson from the University of Bristol quickly led to the idea that we could further minimise our design by harnessing de novo designed coiled-coil peptides as our switchable protein interaction modules. The design principles of coiled coils are relatively well-understood, and the short peptide sequences required meant that we could use solid-phase peptide synthesis to quickly obtain and test design candidates.

An extremely productive research visit to Bristol working with Jordan Fletcher, a post-doc at the time in the Woolfson lab, saw us go from brainstorming designs to synthesizing and testing the candidate designs in a matter of weeks. By the end of the visit, we had already ‘prototyped’ a working phosphorylation-dependent protein-protein interaction module.

Back in Germany, the task then turned to combining our module with other components to couple the switching to the binding of lipid membranes. We tested our designs on model lipid membranes known as Supported Lipid Bilayers, and measured membrane binding with fluorescence microscopy. Designing systems that simultaneously achieve controllable protein-protein and protein-lipid interactions while avoiding non-specific interactions and aggregation was challenging and required multiple iterations of design and testing. Nonetheless, with a step-wise approach we first designed a system where a permanently membrane-tethered ‘anchor’ protein reversibly captured a partner ‘cargo’ peptide from solution.

Having shown that we could control membrane binding with a simple anchor-cargo system, we moved on to our main aim of mimicking the avidity-based switch of MinD. We first had to identify and optimise suitable membrane-targeting motifs that exhibited weak membrane affinity when present as a single copy but strong membrane affinity when combined in a dimer. We could not use the membrane-targeting sequence from E. coli MinD itself, as this relies on electrostatic interactions with the bilayer that conflicted with our coiled-coil module. Instead, we identified an N-terminal peptide from the ESCRT-III protein Snf7 that might do the job. After several rounds of optimisation, the peptide was coupled to the coiled-coil modules to create a system whereby both binding partners can be switched between membrane-bound and solution states by reversible phosphorylation.

In summary, we have developed a minimal protein-protein interaction module formed of a coiled coil that can be reversibly switched been assembled and disassembled states by phosphorylation and dephosphorylation, and further incorporated this module into two different systems to achieve reversible membrane targeting.

As we discuss in our paper, the coiled-coil module itself should be broadly applicable for dynamically controlling assembly and disassembly in engineered and artificial protein-based systems. This might include building protein-based logic, signalling pathways, or introducing dynamics into nanostructures. Our reversible membrane-targeting switches allow the control of localization in natural and artificial cells, and in future we hope that the incorporation of further elements such as feedback loops will enable us to recapitulate pattern-forming behaviour akin to that of the MinCDE system. 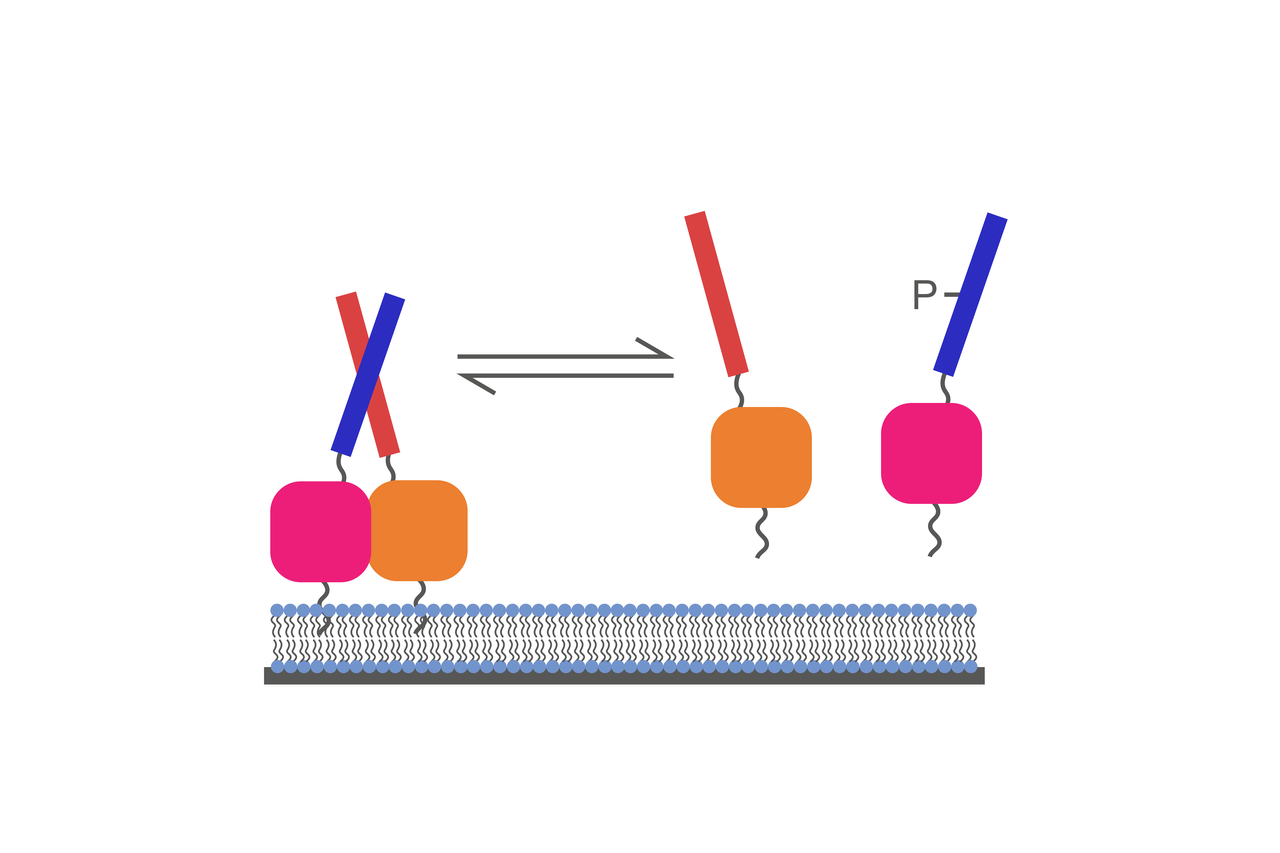 The ability to control the subcellular location of proteins is key to control in synthetic biology systems. We developed a peptide-based molecular switch that regulates dimer formation and lipid membrane targeting via reversible phosphorylation.