A new strategy to help build synthetic DNA-based networks that function more like similar systems in living cells.
Thomas Ouldridge
Royal Society University Research Fellow, Imperial College London
Follow
Like Be the first to like this
0

In recent years, scientists have sought to construct molecular systems that reproduce the complexity of life in a synthetic (human-designed-and-built) setting. On the one hand, building a synthetic version of a natural system would help us to understand the natural systems more deeply, in the same way that actually building a walking robot demonstrates just how impressive locomotion is in the animal kingdom. On the other hand, synthetic molecular systems have great potential as an engineering platform of the future, adding control and designability to the power and versatility of nature.

The use of synthetic DNA as an engineering material has been particularly successful, leading to the growth of the field of DNA nanotechnology. Bespoke single strands of DNA can be ordered from chemical suppliers, as easily as personalised greetings cards. Sequences of the bases - the familiar A, C, G and T of the genetic code - can be specified at will. These bases interact in a highly specific and predictable way, with A-T and C-G base pairs allowing the formation of the famous DNA double helix. If a set of strands is well designed, they can spontaneously self-assemble into a complex structure, or implement a computational calculation, when mixed [1,2].

Although these results are impressive, we are a long way from the power and flexibility of the natural systems that inspire us. One important aspect is the following: a defining feature of life at the molecular scale is constant activity; a cell isn't a static structure that assembles once with all its components in place. Instead, the molecular circuits inside are constantly on the go, allowing for growth, replication and maintenance of the cell in a healthy state, ready to respond to changes in the outside world. Key components (such as enzymes) participate in reactions but are then recovered, rather than being consumed, allowing them to continue to operate.

Physicists would say that these living systems operate out of equilibrium, and must continuously consume chemical fuel such as ATP to do so [3]. These fuel molecules must be stable on their own, but provide a large energy boost when they are broken down - just like the fuel in a car. In this work we present a new strategy for designing similar behaviour in DNA-based systems: we place mismatched base pairs (not A-T or C-G) in the interior of double-stranded DNA reactants. These mismatches are eventually eliminated when the reactants are converted into products. However, the reactants are essentially stable, despite the overwhelming favourability of mismatch-free products, because the destabilizing mismatches are well hidden. The effect of the mismatches is only felt when additional DNA strands - the key (enzyme-like) species mentioned above - trigger the system. These key species are recovered, as in natural systems, and the elimination of hidden mismatches fuels the process in a controlled way, analogous to the role of ATP in natural systems.

Fig. 1. Analogy between hidden thermodynamic driving in our DNA-based system and ATP in a natural context. The breakdown of ATP releases energy, but is slow unless an enzyme is present to lower activation barriers. Similarly, the conversion of reactants to products in our DNA system eliminates a mismatch “X” and therefore releases energy; however, the hiding of the mismatch makes the reaction slow unless a triggering strand is present. 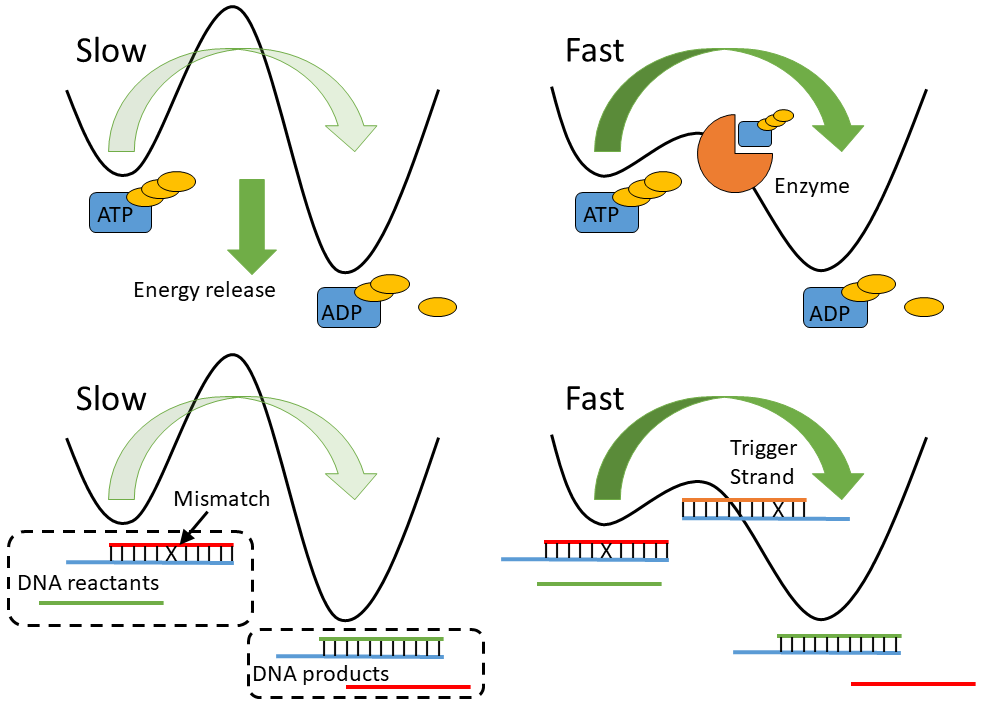