In 2009, we published our paper in Nature Biotechnology which described isobutyraldehyde production from CO2 in cyanobacteria1. Climate change has stimulated efforts towards reducing global CO2 emissions. These efforts have led to increased interest in renewable sources of fuel and feedstock chemicals in order to decrease our dependence on fossil fuels. Cyanobacterial chemical production possesses two advantages for the long-term, global-scale goal of achieving a cleaner and more sustainable energy economy. First, the process consumes CO2, which reduces net greenhouse gasses in the atmosphere. Second, it uses a renewable energy, sunlight, to produce chemicals of industrial relevance.

Before the 2009 paper, we had developed an amino acid-based biosynthetic technology for production of fuel-grade alcohols (such as isobutanol, 2-methyl-1-butnaol, and 3-methyl-1-butanol) in Escherichia coli2. Our engineered E. coli strain was able to produce 22 g/L isobutanol from glucose in shake flasks with 87% of the theoretical maximum yield. This remarkable production opened my eyes to cell factories and inspired me to pursue a longtime dream of mine, sustainable and renewable chemical production from CO2. I wanted to utilize the strategy of recycling CO2 as a building block for chemical production using photosynthesis. To do this, I transferred the pathway into the cyanobacterium, Synechococcus elongates PCC 7942. My postdoc advisor, Prof. James C. Liao, generously green-lit the project and provided fruitful advice throughout its duration. Dr. Wendy Higashide was also indispensable to the project, having done various key analyses. A major feasibility constraint of photosynthetic biochemical production is product-recovery efficiency, an important determinant of the total production cost. Aware of this, we chose isobutyraldehyde, one enzymatic step before isobutanol, as a target because it has a low boiling point (63 °C) and a high vapor pressure (66 mm Hg at 4.4 °C), suggesting that it can be readily stripped from microbial cultures during production. Our engineered cyanobacteria strains demonstrated several orders of magnitude increases in productivity1.

Publishing our results in Nature Biotechnology was the first step of achieving my dream of photosynthetic production of chemicals. I was happy to see our Nature Biotechnology paper1 made significant contributions to the field, changed the course of research, and sparkled global interest in cyanobacterial chemical production. In my research group cyanobacterial production has been a veritable bed of inspiration, leading to multiple NSF projects, including my CAREER award, and a fruitful collaboration with a chemical company, Asahi Kasei Corp. We are also exploring the production of biopolymer precursors for the DOE BEEPS program (PI. Prof. Stephen Mayfield (UCSD)).

Spurred on by our publication in Nature Biotechnology, I enthusiastically rallied for cyanobacterial chemical production and proposed it in my job hunt for an Assistant Professor position. Fortunately, the University of California, Davis received the project very positively. I was able to start my research group at UCD in 2009. The primary objectives of my research group are to construct a platform using cyanobacteria to directly and sustainably convert CO2 to valuable chemicals and to gain understanding of the complex behavior of photosynthetic metabolism in order to engineer systems with increased efficiency (Fig. 1). A great example of this concept is that my group successfully engineered S. elongatus to produce 2,3-butanediol (23BD), a versatile building block molecule for the synthesis of many valuable chemicals such as methyl ethyl ketone (a liquid fuel additive and industrial solvent), and 1,3-butadiene (a precursor for diverse polymer and copolymer materials)3. Previously, nearly all cyanobacterial production studies exclusively used continuous lighting in laboratory conditions when measuring productivity. Natural sunlight is freely available for any photo-dependent chemical platform and can assist the commercial viability of production. This natural lighting includes periods of darkness where many cyanobacteria naturally stop growing, fixing carbon, and producing biochemicals. The natural mechanisms that allow for adaptation to drastic changes in lighting conditions also cause a decrease in production time to 8-14 hours per day.

To overcome these limitations, an obligate photoautotrophic cyanobacterium, S. elongatus was engineered for enhanced production of 23BD via supplementation with sugars such as glucose and xylose. This study achieved 23BD production under diurnal conditions comparable to production under continuous light conditions4, 5, and achieves chemical production under dark conditions. However, the yield achieved in this study was only 40% of the theoretical maximum yield possible from glucose alone (0.5 g23BD/gglucose).

To address the low yield, we developed a follow-on strategy to optimize glucose and CO2 utilization while also improving 23BD production and yield. First, glucose metabolism was rewired through the oxidative pentose phosphate pathway to overproduce ribulose-5-phosphate (Ru5P), a precursor of the CO2 fixation reaction. Next, because carbon metabolism in cyanobacteria is precisely controlled in response to environmental changes such as light and carbon availability, cp12, a regulatory gene of the Calvin Benson (CB) cycle, was deleted to amplify conversion of Ru5P to ribulose-1,5-bisphosphate (R15P). The engineered strain more efficiently uses both CO2 and glucose, and produces 12.6 g/L of 2,3-butanediol with a rate of 1.1 g/L/d. The results were published in Nature Communications6. 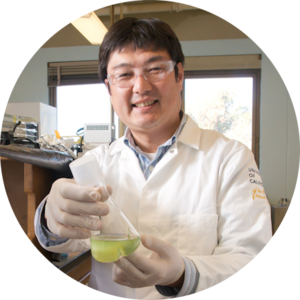 In this post, Dr. Henrik Bjørn Nielsen and Dr. Mathieu Almeida are traveling back in time to talk about their paper on co-abundance binning published in 2014 in Nature Biotechnology and how it affected their field and careers.