In 1977, the first percutaneous transluminal coronary angioplasty was conducted. This was a breakthrough in myocardial revascularization. Without that, patients would need the much more invasive approach which is the coronary artery bypass graft surgery. The first FDA-approved stent in the USA was created by Richard Schatz and coworkers in 1987. It was the first balloon-expandable, stainless steel stent. However, the formation of in-stent neoinitmal hyperplasia due to the excessive growth and proliferation of vascular smooth muscle resulted in restenosis rate of about 20-30%. This is a big drawback of using bare metal stents. Antiproliferative drug-eluting stent was introduced in 2003 in order to reduce the overgrowth of smooth muscle cells and it have been widely used to treat cardiac problems with no need for more invasive procedures. The global drug eluting stent market size is forecast to reach USD 9.58 billion by 2026. [1] One caveat is that the antiproliferative drugs also delay the endothelization process and the polymer coating induced hypersentivity reactions. To enhance the biocompatibility of stent, researchers started the investigation of bioresorbable stent. The first commercially available bioresorbable vascular scaffold (BVS) is made by Abbott Vascular in 2011. However, there was an enhanced risk of thrombosis and undesired side effect of BVS, which was later on withdrawn from the market because of low demand.

A perfect stent would ideally have the following three features: 1) mechanical property: to keep the vessel open; 2) biocompatibility: allow the body to treat the stent as a part of its own; 3) bioactivity: release therapeutic agents to aid vascular healing and tissue repair after ischemic injury.

We sought to design, fabricate, and test a new stent product that has all three features. For the first feature, we started with a BMS, which can provide sufficient mechanical support. After that, the question is what the coating material should be. We reasoned that no matter how good a polymer could be, nothing is more biocompatible than the substances in our body. We initially thought of using cells (e.g. stem cells) to coat the BMS. There have been some reports of using stem cells to pre-coat the stent[2, 3]. However, using live cells would make the stent products unqualified for off-the-shelf usage, which is so important for a medical device that will often be used in an emergent case. We turned our sight to extracellular vesicles (EVs). EVs, including microvesicles and exosomes, are lipid vesicles released from essentially all cell types. In particular, exosomes are nanosized vesicles with a diameter around 100 nm. They are enriched with proteins and non-coding RNAs and are essential for cell-cell communication. Mesenchymal stem cell-derived EVs have been shown to promote the migration and proliferation of endothelial cells, reduce inflammation[4] and promote vascular healing[5]. In this work, we linked exosomes to a bare metal stent by using a reactive oxygen species (ROS) responsive linker[6]. We named this stent an exosome-eluting stent, or EES.

Placement of an EES in a SD rat model and a Apoe-/- atherosclerotic rat model demonstrated the advantages of EES over both bare metal stents (BMS) or drug-eluting stents (DES). Both DES- and EES-stented animals showed less neointimal area compared to that from BMS-stended animals. However, EES showed a better strut coverage rate compared to DES. We further induced unilateral hindlimb ischemia in the Apoe-/- atherosclerotic rat model. Results indicated that EES released exosomes to promote tissue repair.

In the future, we will certainly work on two aspects: 1. Current studies are using rodent models and the implant time is relatively short. Late and very late in stent restenosis in a large animal model needs to be evaluated.  2. We also plan to define the microRNA and/or protein cargos in the exosomes that can explain the reparative effects of EES.

Click here to read more about our work in Nature Biomedical Engineering. 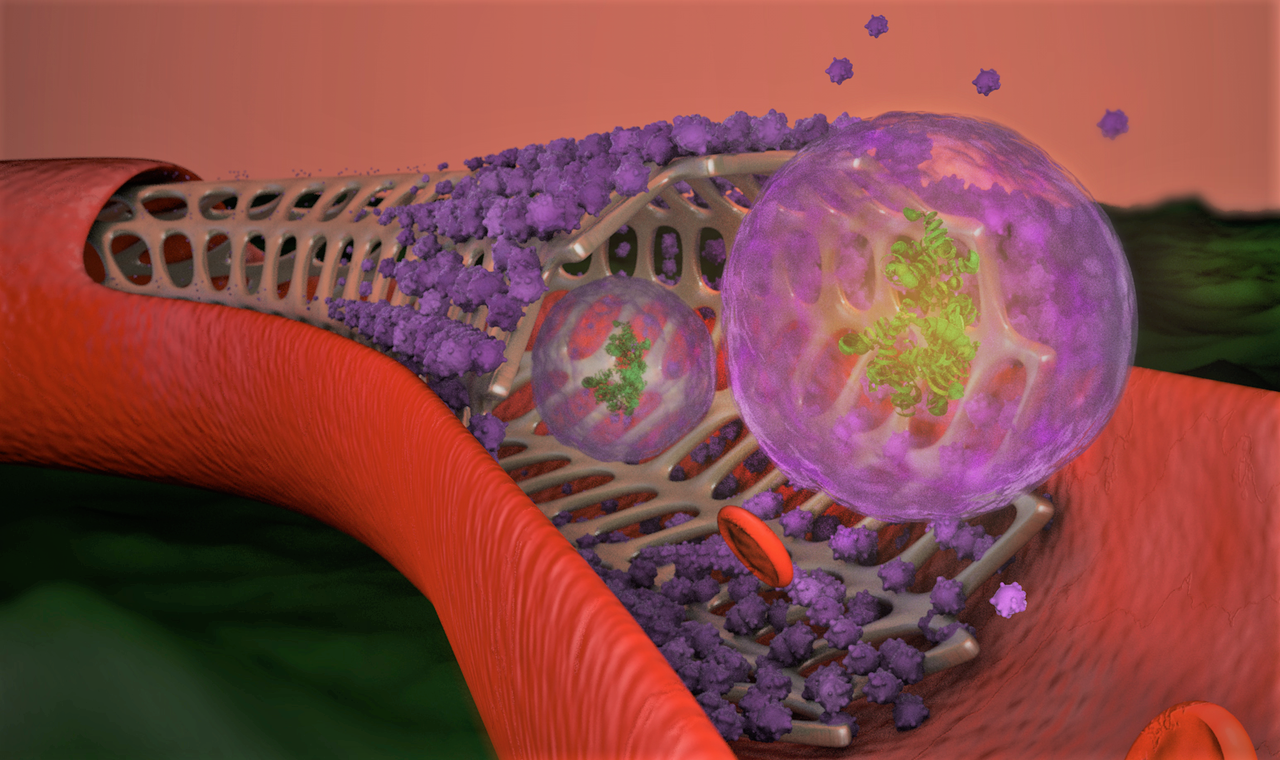